One of the most dramatic views to compare when looking at before and after ear plastic surgery photos is this base view. It is always nice to confirm just how much change in the shape of the ear has been accomplished with otoplasty. For instance, this San Diego ear reshaping patient had ears that were fairly prominent in terms of sticking out from the side of the head. On this base view of her ears, you can see how the auricle is angulated nearly 90 degrees from the scalp surface. Otoplasty, also known commonly as ear pinning and ear reshaping, was able to be done from completely behind her ears. By reshaping the ear and bringing the entire auricle closer to the head (essentially pinning the ears back), her ears now look much less prominent. In fact, you don’t even pay attention to her ears when looking at her now following ear plastic surgery. The patient is also much less self-conscious now about her ears. Of course, the frontal view before and after ear reshaping surgery is always the one patients and plastic surgeons care about most commonly. But this base view is also nice to visually compare really how much the ears can be reshaped in many otoplasty patients. 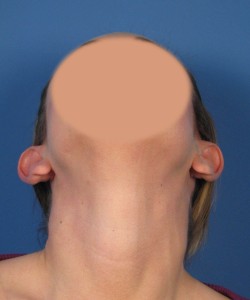 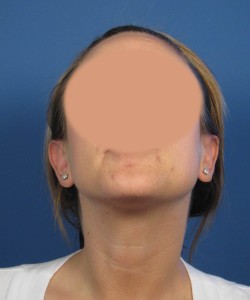