Incisionless, scarless otoplasty is a very specific type of ear pinning surgery that does not involve the cuts made behind the ear with traditional otoplasty. It should be noted that most plastic surgeons will refer to this type of ear pinning as ‘scarless’ or ‘incisionless’ otoplasty. However, technically, neither of these is entirely accurate. There is scarring – just not as much scarring as with traditional otoplasty where more extensive work is being done to effect a change in the shape of the ear. And there is an incision in many of these otoplasty cases – just not as long as is seen in traditional ear pinning. But given how much less invasive scarless or incisionless otopalsty is compared to traditional ear pinning, these two descriptors are fair to use.

Percutaneous otoplasty is another term you will hear used synonymously with scarless and incisionless otoplasty – and one that may be the most accurate. Percutaneous simply means across or through the skin – and is appropriate here because the ear is being pinned back using sutures that pierce through the skin.

The reality is that some surgeons will use only a piercing of the skin – avoiding a true incision, or cut. But many will make at least a small, short cut through the skin to complete the ear pinning.

How is Scarless Otoplasty Performed? 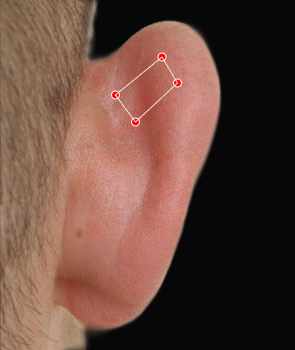 Scarless otoplasty is performed by using permanent sutures to bend and reshape the ear cartilage. The adjacent photo shows roughly how a single suture might be oriented to accomplish this.

Because the sutures can be placed without having to cut the skin, there is no scar formation on the skin surface. But there is scarring that occurs under the skin – it is just not visible. In fact, you want some degree of scarring to occur – the good scarring that your body will form around the sutures and cartilage, which helps to keep the ear in its new shape.

As was noted above, in some cases an incision is actually made through the skin – albeit a very short one compared with the much longer incisions created during traditional otoplasty. An incision is sometimes made so that the knot of the suture can be buried, or hidden under the skin surface. The remainder of the otoplasty is done percutaneously using just skin piercings. Usually, a permanent suture is chosen to pin the ear back. When the proper pattern of placement is utilized, the sutures can be tightened under the skin to fold the ear backward and create the desired shape. If a small incision was made in the skin, it is typically closed with a fine, absorbable suture.

Keep in mind that not everyone is a candidate for incisionless, percutaneous otoplasty. That is because this type of minimally invasive ear pinning does not address a large, overly developed conchal bowl issue. If your ear is too prominent from an excessively large cartilage bowl, then that would need to be addressed with a more traditional otoplasty technique that requires reduction of the conchal bowl – meaning it would need to be resected, or cut out, using a more invasive approach.

Scarless, incisionless ear pinning is more ideal for those patients who need the antihelix of the ear to be reshaped. These otoplasty candidates usually have a flatter looking, poorly developed ear due to the antihelix ridge not being well-formed. Dr. Hilinski will be able to assess your candidacy within minutes of seeing your ear to determine if the scarless, percutaneous otoplasty is the best choice for you.

Do you have to undergo deep or general anesthesia for scarless, incisionless otoplasty? The answer in a great majority of cases is no! Given how this type of otoplasty is so minimally invasive, scarless otoplasty can be done very readily using just a few injections of local anesthesia. The amount of time it takes to complete the scarless, incisionless ear pinning is typically a fraction of what is involved with traditional otoplasty.

Since the actual ear pinning procedure is not as invasive as traditional otoplasty surgery, recovery from the incisionless, scarless technique is much less intense. A compression bandage is still used in the first few days of recovery. And Dr. Hilinski still recommends using a compression bandage at night for several weeks. However, the pain is much less intense versus traditional ear pinning surgery.

If you have prominent, big ears and desire to have them made less noticeable, contact one of the nation’s best otoplasty surgeons, Dr. Hilinski, today to see if you can have incisionless, scarless otoplasty.