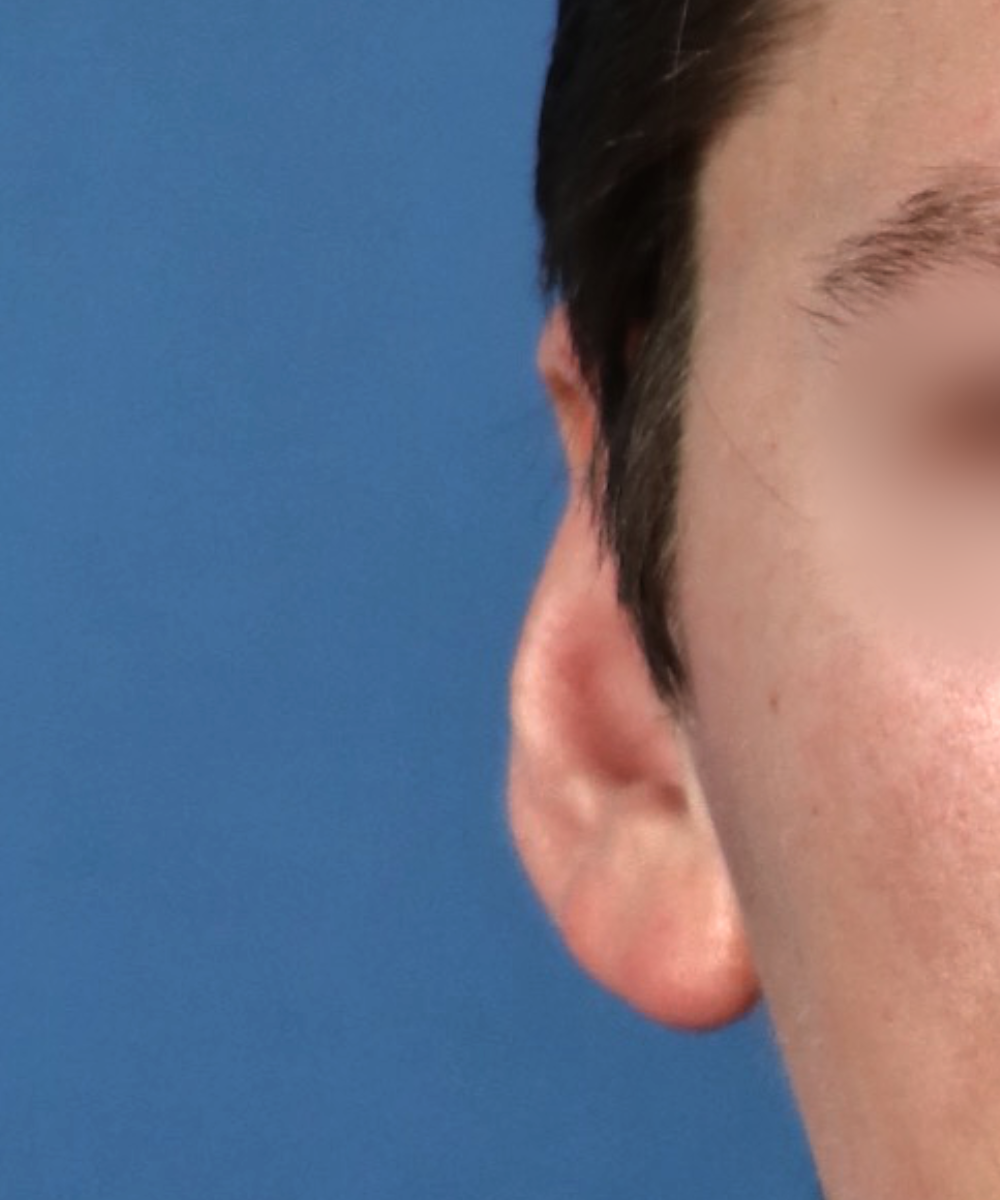 So what is reverse otoplasty and how does it differ from regular otoplasty? Well, it is – as the term sounds – just the reverse of what is done with ear pinning. So instead of bringing the ear closer to the side of the head, reverse otoplasty is accomplished by repositioning the ear so it sticks out farther. 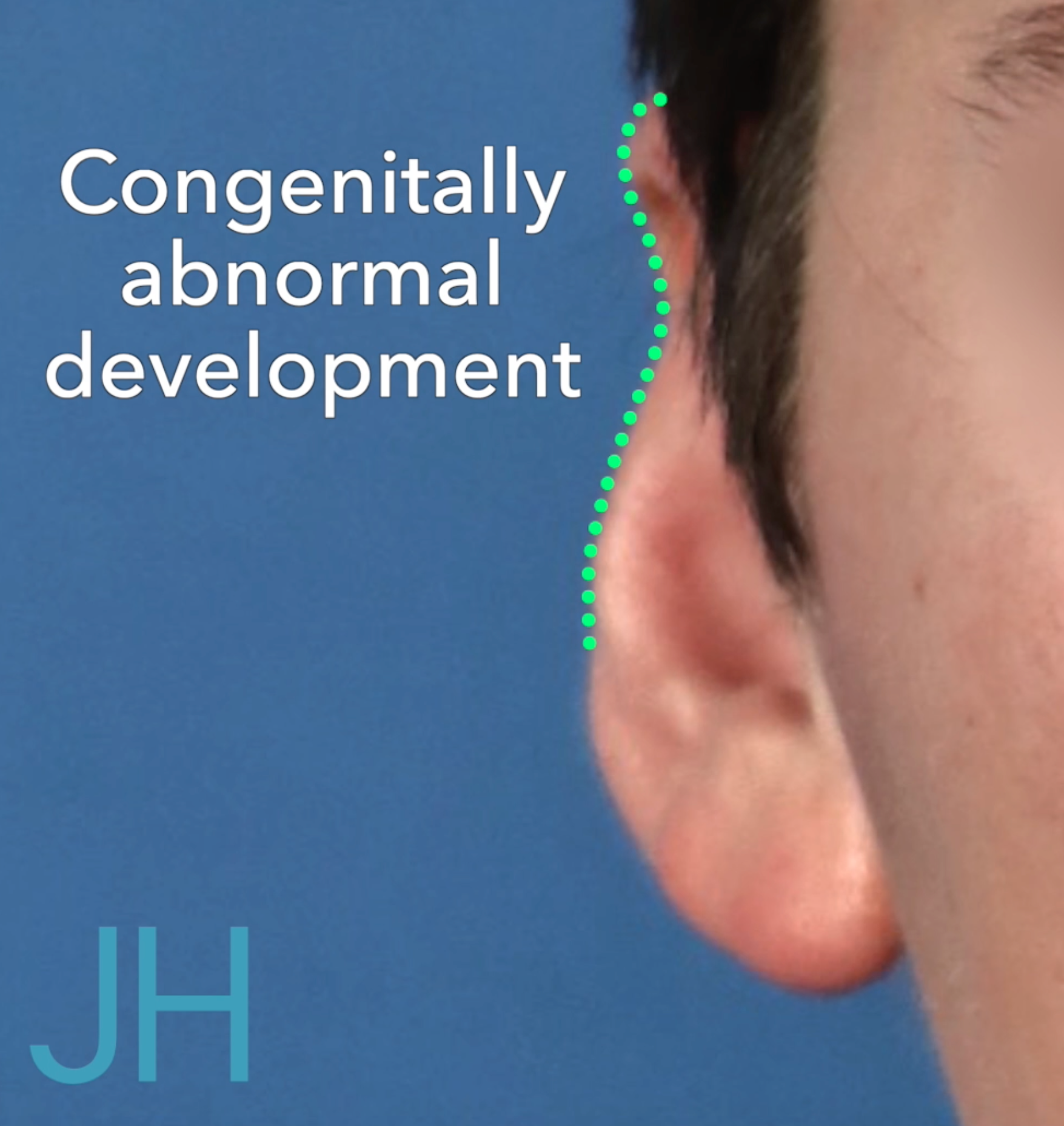 Taking a close look at the adjacent photos for a visual guide, you can see how this patient’s right ear clearly looks abnormal. So what is the problem? The top half of his ear is congenitally poorly developed. Meaning, from birth his ear did not grow in the proper manner, which resulted in the cartilage remaining too close to the side of his head. In other words, the ear doesn’t stick out enough! If it did, the outline of his ear would not have the soft S-shaped contour outlined in green and shown here. Instead, the outline of his ear would be straighter and more vertically oriented.

Other instances where you will see this type of issue – where the ear is stuck too close to the side of the head – involve patients who had prior otoplasty surgery and the plastic surgeon overcorrected the ear. In these cases, the surgeon either took out too much cartilage in an effort to pin the ear and/or overly tightened the sutures in the process of setting the ear back. Regardless of the cause, the end result is the same as what you would see in this congenital case – an ear that appears tucked back too close to the head.

In both of these aforementioned situations, the goal is to lateralize the ear – or reposition it so that it actually sticks out further. That is precisely why Dr. Hilinski refers to this as ‘reverse’ otoplasty surgery. In cases where the patient had prior otoplasty, the term ‘reversal otoplasty’ has also commonly been used.

So how is this performed surgically? In most cases, the ear has to first be ‘released’ in some manner. Meaning, the ear has to be mobilized in order to allow proper movement to a new position. This is particularly important in cases where otoplasty, or ear pinning, was previously performed. That is because removal of cartilage, suture placement and scar tissue can all contribute to the ear being pulled in too tightly. Releasing all of these unwanted forces is a prerequisite to bringing the ear back out. In congenital cases, the cartilage still requires some degree of release. But, the amount and degree of surgical release is much less in comparison. 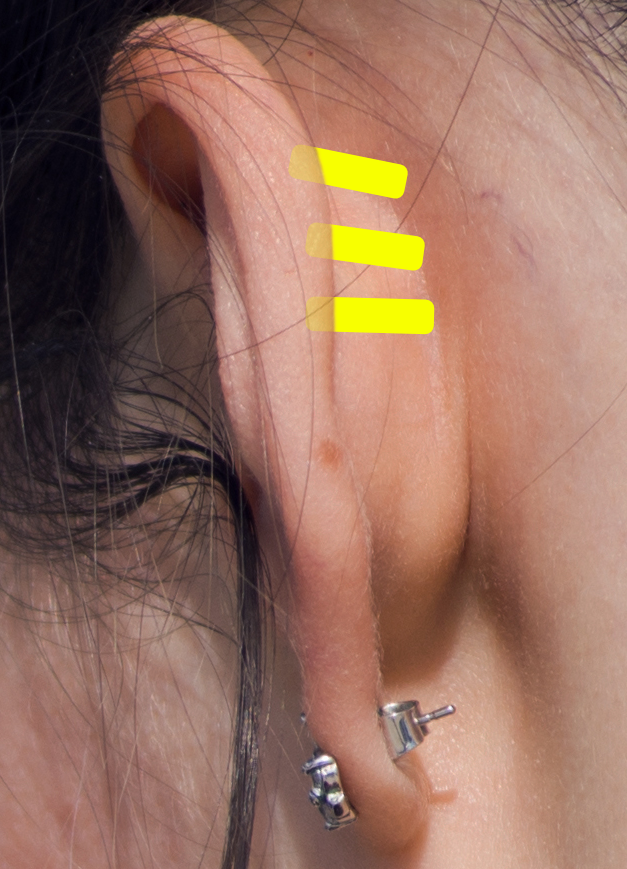 In most cases of reverse otoplasty, cartilage grafting is needed to support and keep the ear in the new location and position. Think of these cartilage grafts as being 2×4 pieces of wood used to cantilever something out to the side. This is visually demonstrated in the photo shown here where the yellow shaded areas represent the individual cartilage grafts used to splint the ear out to the side. In some cases a single, large graft can do the job. However, in most cases of reverse otoplasty, multiple grafts are needed to accomplish the goal of getting the ear to stay laterally (out to the side). In congenital reverse otoplasty, this cartilage can sometimes be harvested (taken) from an adjacent area of the ear for planned grafting. In the post otoplasty patient, the ear cartilage is usually no longer present. Therefore, cartilage is typically gotten from somewhere else, which includes the option of using tissue-banked sources.

Before and After Reverse Otoplasty

Sticking with our case example, here is a quick photo comparison of how an ear can be reshaped with reverse otoplasty technique. As you can readily note, the ear is no longer stuck against the side of the head. Now, it is more vertically oriented in terms of the outer border – and that is because a good portion of the cartilage and skin has been brought out laterally so you can now see it from the front view. In this instance, this was successfully accomplished by Dr. Hilinski using cartilage grafts taken from the same ear. In addition, the skin and soft tissue were moved around strategically in order to allow the ear to be pushed out to the side. The end result is an ear that now simply looks normal, which at the end of the day is always the goal! 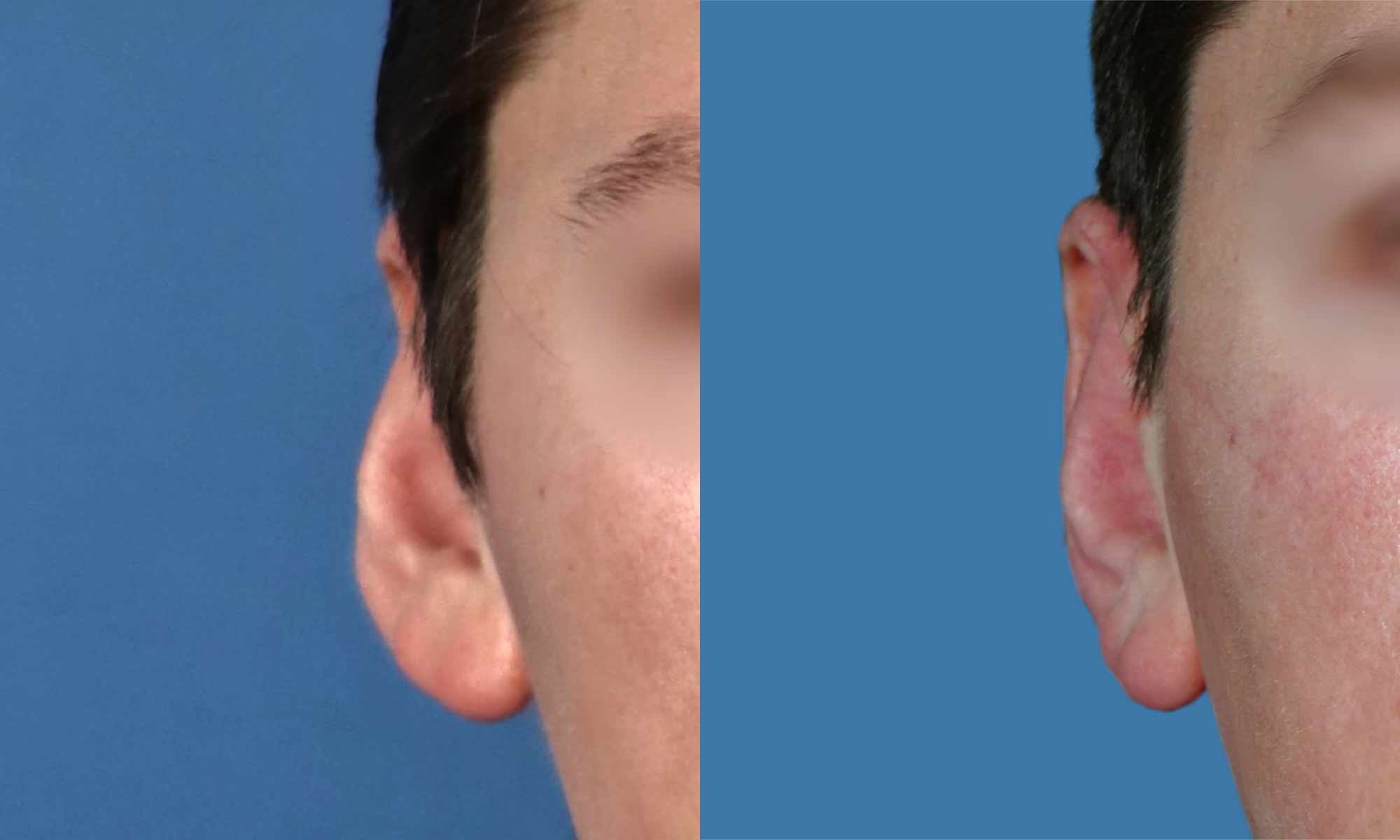 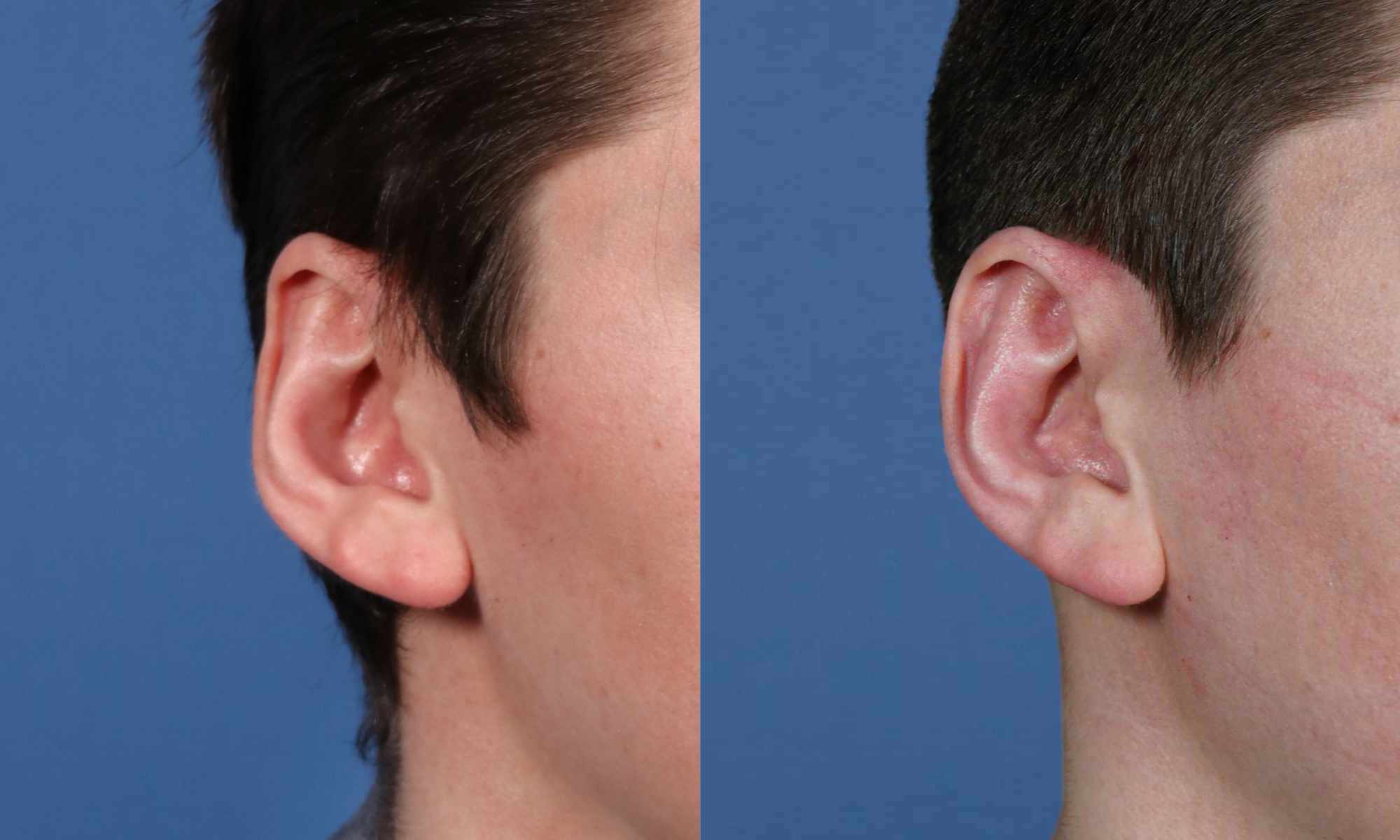 Here is another great case example of reverse otoplasty, or otoplasty reversal, to help restore a proper appearance in a male patient who had his ears pinned by a different plastic surgeon. Unfortunately, like many patients out there, he had ear pinning that left him overcorrected. Meaning, his ears were clearly sutured way too close to the side of his head.

When looking at his frontal view, you can readily appreciate how his ears have been pinned too far inward. In fact, they nearly look ‘stuck’ to the side of his face from this view. He even had attempted revision surgery to reverse the effects of his otoplasty surgery. But, it didn’t work as performed by the other surgeon.

After doing extensive online research, he discovered that Dr. Hilinski is considered one of the nation’s foremost experts in cosmetic ear surgery. So he sought us out and decided to go forth with another attempt at reversing the prior ear pinning.

Dr. Hilinski ended up using rib cartilage to provide a strong enough support system to keep the ear further out to the side. This was done using cartilage struts placed very carefully behind the ear and anchored to the deeper tissue. In doing so, he was able to bring the ear out and keep it there in a secure manner. The results shown here demonstrate a somewhat dramatic improvement in the position of his ears – essentially reversing the effects of the otoplasty procedure. He now has a set of ears that simply look normal and natural. 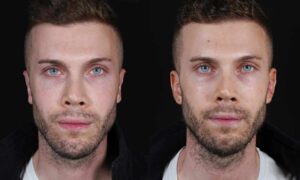 Here is another case of reverse otoplasty performed in a female patient who had prior otoplasty by a different plastic surgeon.

As you can see from the front view, her ears were over corrected and appear to be stuck back to her head. If you look more closely at the helical rim, you can see how it curves inward. This is because her ear was folded back too far by the prior cosmetic ear surgeon.

Using rib cartilage grafting, I was able to reshape and reposition her ear so that the helical rim was brought out from the side of the head. In doing so I was able to make her ears look more natural because you can now see the actual helical rim border when looking at her from the front view.

For those of you who don’t remember or never really used so-called ‘old-fashioned’ telephones, the shape of the hand piece was curved. This is shown in the adjacent photo diagram. Also shown is a photo of a patient who developed telephone ear deformity after having ear pinning by a different plastic surgeon.

Unfortunately, her surgery left her ear quite deformed. Just like the shape of a telephone, her ear had an unwanted curvature to it – where the central portion went inward when looking at it from the front view. Ideally, you would want the outer border of the ear (the helical rim border down to the earlobe) to be more vertical straight up and down – or slightly angled or curved outward. What you don’t want is the dreaded telephone ear where it looks indented and the top and bottom appear to stick out further.

Fortunately for her, I was able to help correct the telephone ear deformity using similar techniques that were discussed above for the over-corrected ear following otoplasty. In this particular type of ear, the cartilage grafting is very directed at the segment of the ear that is bent inward too far. Incisions are typically hidden behind the ear and allow for grafting to be performed. The new, additional cartilage is placed to help stent or hold the framework of the ear in a more lateralized position.

An example of this is shown here shortly after telephone ear deformity correction. As you can see, the structure of the ear has been reshaped utilizing cadaveric rib cartilage grafting from the backside. Following the surgery, the outer border of the ear no longer appears like the shape of a telephone. Rather, it now has a more up and down (or vertical) appearance.

If you are one of many patients out there bothered by a telephone ear deformity after prior otoplasty surgery, please don’t hesitate to contact my office to schedule a consultation to get it fixed.