As an expert in nose surgery, Dr. John Hilinski not only performs cosmetic reshaping (rhinoplasty) but also reconstructive nose surgery following removal of cancer. This particular case presentation is an excellent example of how an experienced rhinoplasty and revision rhinoplasty expert utilizes their background and training to help patients who require reconstructive nose surgery following skin cancer removal. This very pleasant female from San Diego, CA was diagnosed with skin cancer involving the bridge of her nose. She was evaluated by a dermatologist who removed the skin cancer during a procedure called MOHS surgery. This is a very common method of removing skin cancer so that you can try and preserve as much of the normal uninvolved tissue surrounding the skin cancer. Following the MOHS surgery performed by a local dermatologist here in San Diego, CA, the patient was referred to Dr. Hilinski for reconstruction of the nose. Because of the volume of reconstructive rhinoplasty that Dr. Hilinski performs, he has a widespread reputation around San Diego as the preferred nose surgeon to help these type of patients out. In fact, Dr. Hilinski has an established group of MOHS surgeons in San Diego who regularly refer him cases like this for nose reconstruction following skin cancer removal. 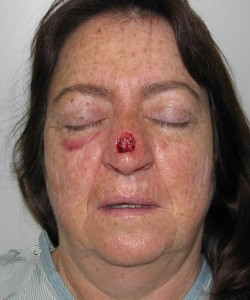 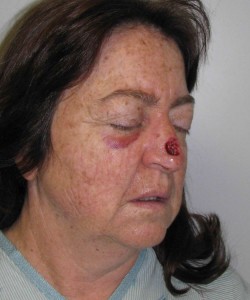 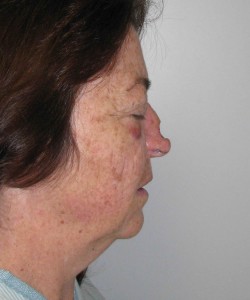 As you can see from her photos shown here, there was a fairly good sized defect (hole) in the middle portion of her nasal bridge following MOHS surgery. When looking at the nose from the frontal view, you can see there is a rounded defect where the skin cancer had been removed during the MOHS surgery. As the patient begins to turn to the side, you can can a better appreciation of just how extensive the problem is when looking from the oblique (45 degree angle) and lateral view. On the lateral, or side, view you now get an idea of just how deep the cancer went into the nose, leaving a large divot that involved not only the skin of the nose but also the underlying cartilage and bone.

She came to Dr. Hilinski with obvious concerns about how she was ultimately going to look. As with most skin cancer patients, this is one of their main worries beyond whether or not the skin cancer was removed completely. As you can see in this particular case study, she had a significant esthetic deformity following removal of the skin cancer that was rightfully a source of concern. Fortunately, in the right hands of an experienced facial plastic surgeon, these type of issues can be managed successfully to achieve very acceptable cosmetic outcomes when it comes to nose reconstruction.

Given the location and extent of the nasal defect, it was necessary to formulate a plan where additional soft tissue and cartilage were brought into position so the hole could be closed. Unfortunately, in cases like this, skin grafts are not a real viable option. Skin graft reconstruction of the nose in this manner would require taking skin out from another area of the body and transplanting it in the nose. This type of nose reconstruction relies on the skin graft sufficient blood supply in the new location in order for the tissue to survive the transplant. Regretfully, skin grafting in a hole of this size simply carries too much risk that the graft will not get enough blood supply to survive – and will fail. In addition, much of her nasal bridge required structural rebuilding to replace the lost cartilage and bone – something that cannot be done well in conjunction with skin grafting alone.

The only real viable option in a case like this is to perform what is called a paramedian forehead flap – also known as a forehead flap. This is a term that describes the use of tissue taken from the forehead region to rebuild the nose. It is sort of like taking from Peter to pay Paul. As opposed to a skin graft that depends on new blood supply to feed the graft after placement, flaps come with their own blood supply. This is because they are not detached (cut out) from the body at any point during the initial reconstruction. They are, instead, pedicled flaps that remain attached to the body in an area immediately adjacent to the defect that is being repaired. As such, a flap’s blood supply is not compromised. The huge benefit to this type of nose reconstruction is the fact there is a very dependable continuous blood supply to the site of the nose reconstruction. In addition, this type of reconstruction allows a more robust piece of soft tissue to be used, such as in this case, where a good amount of the nose needs replacement. 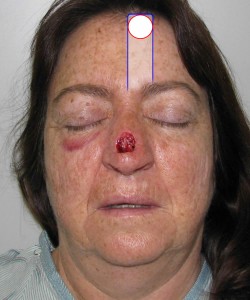 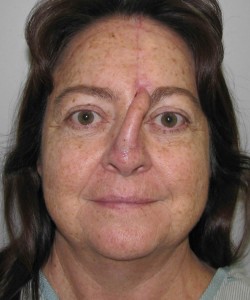 In real life a paramedian forehead flap reconstruction can appear somewhat odd to many people, including patients. This is shown here in the adjacent patient photo to visually demonstrate to those who might require this type of nose reconstruction, exactly what they might look like during this portion of their recovery. At this point in the reconstruction, the paramedian forehead flap has been set into position to cover the hole that was created in the nose. The area where the flap was taken from the forehead has now been sutured closed, thus creating a vertical scar that can be seen in the photo as a faint pink line. The odd looking bridge of tissue that extends from the eyebrow to the nose is left as is for several weeks. The reason for leaving the forehead flap in this position is to be certain there is a constant blood supply to the tip of the flap where it was needed to cover the hole in the nose. This corresponds to the red-outlined circle noted above. After several weeks of healing in this position, the portion of the flap that covers the hole becomes integrated with the surrounding nasal skin. At this point (3-6 weeks out) the blood supply to the end of the flap can be safely disrupted without risking viability of the tissue now covering the hole. The bridge of tissue is carefully removed by performing another surgical procedure (called a second stage), which is much less involved when compared with the original nose reconstruction.

The end result of this type of complex nose reconstruction is shown in the following before and after photos of the same patient highlighted above. These photos show her surgical result from Dr. Hilinski nearly 3 years out. However, most patients look well-healed at approximately 1-3 months out from the second stage surgery. As you can see in these nose reconstruction photos, her nose now looks quite normal with little signs of having a large defect from the skin cancer removal. This includes her oblique and side views where the nose required extensive rebuilding of the underlying cartilage and bone in addition to use of the paramedian forehead flap. In addition, you can see that her forehead has healed quite nicely where the flap of tissue was taken to perform the reconstruction. 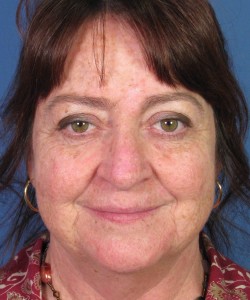 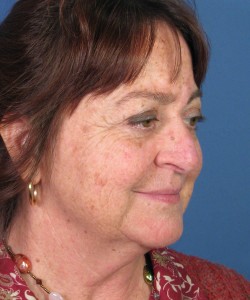 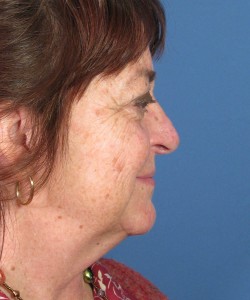 If you are interested in consulting with San Diego rhinoplasty and nose specialist, Dr. John Hilinski, for possible repair of a nasal defect following skin cancer removal, contact our office today. 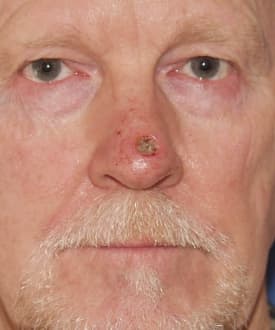 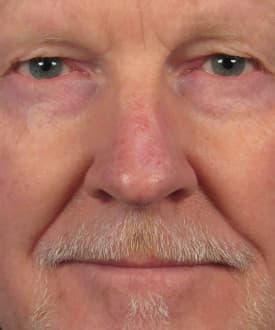