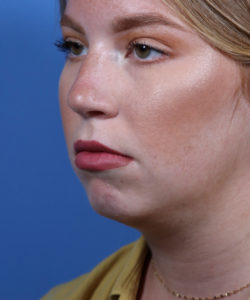 Here is a great example of what Radiesse filler can do to help augment the chin area to provide results that rival placement of a chin implant. This very pleasant young lady from San Diego came to see Dr. Hilinski because she wanted something done to her chin area. In particular, she thought her chin looked weak – taking away from the overall balance of her face and neck. If you look at her oblique view as is shown here, you can see how the chin simply didn’t project out far enough. Instead of giving the desired shadowing effect along the lower face, her chin looked to drop off as you followed her facial contour from the lower lip to the neck.

What options did she have to help improve her chin contour? One of the most common recommended procedures is a chin implant. However, increasingly more and more patients are opting to do something non-surgical to help improve their chin projection. This includes a wide variety of filler choices – including Radiesse. The reason Radiesse has become one of the popular fillers to inject into the chin is because (1) it lasts a bit longer than traditional hyaluronic acid, or HA, fillers such as Restylane and Juvederm and (2) you get more volume of filler in a single syringe compared with other HA fillers.

This patient chose to have Radiesse injected into the chin to push the border of her chin out – also referred to as adding chin projection. This is really quite similar to what would be accomplished by adding a chin implant – just without the incisions, cuts, scars and downtime of a surgical procedure! In fact, Radiesse chin augmentation is done in the office exam chair and takes only about 15 minutes to complete. Since the Radiesse filler contains lidocaine numbing medication, there is very little discomfort with the treatment. In this particular patient, Dr. Hilinski used a blunt-tipped cannula to carefully and safely place the Radiesse over the front portion of her chin. Once the front part of her chin was made to be more defined, he then started to add more Radiesse along the sides of the chin so it would transition beautifully along the actual underlying jawbone. The placement of the Radiesse mimicked the shape of a chin implant that would normally be done in surgery – approximating the shape of a horseshoe as it wrapped around her native jawbone.

Within minutes, Dr. Hilinski was able to use the Radiesse filler to give this patient a more defined chin! In addition to adding more chin projection, the Radiesse helped to give her face an overall improved balance and harmony. This can be seen in the adjacent photo examples where you can now see she has better chin projection. Whereas her chin looked to fall off previously, it now has true structure and form – providing her with elegant shadowing along the lower face as it transitions into the neck. This is precisely what a chin implant would have accomplished for her – but this was done using Radiesse injection with no downtime whatsoever. When you look at her side or profile view, you can also see how the Radiesse chin injection gave her what almost appears to be a liposuction-like transformation. This is because the Radiesse filler has pushed her chin contour forward – offering her more of a jawbone, which makes it look like there is less fullness under her chin. Of course, this is all the art of illusion. But it is a very powerful testimony to what a straightforward injection treatment like Radiesse can help do to improve someone’s overall facial appearance. 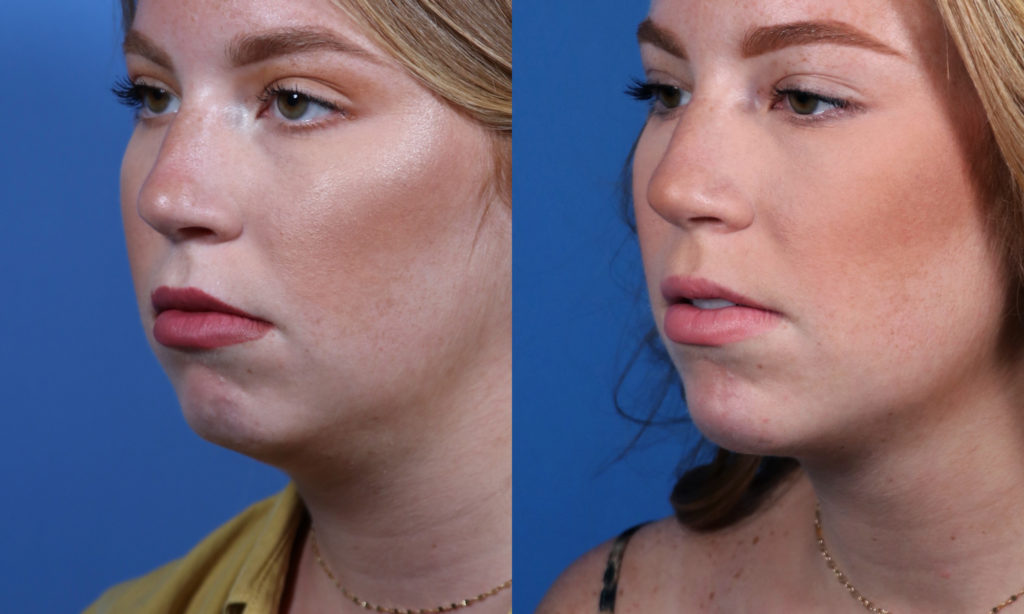 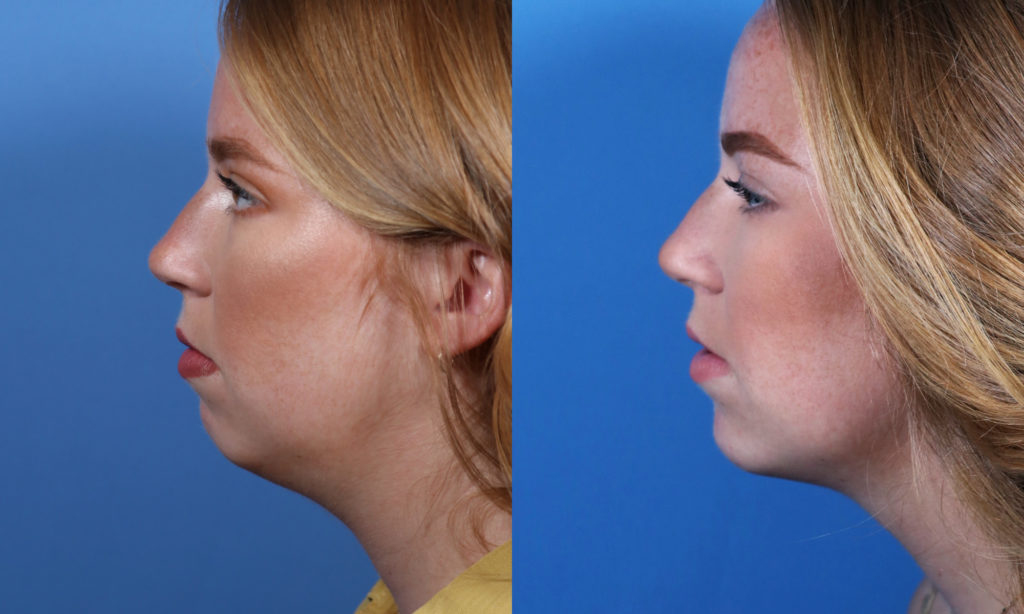