I just finished a revision open rhinoplasty today on this female patient from San Diego. We took some intraoperative photographs to show others what the anatomy looks like when dealing with a pinched nasal tip and hanging columella. This patient had  a prior rhinoplasty done by another San Diego plastic surgeon. She was still unhappy with the appearance of her nose and consulted with my office for a revision rhinoplasty.

On preoperative rhinoplasty assessment, most of her issues were manifested on the frontal appearance. As you can see below, she had bilateral pinching of the nostrils with her right side being more severely collapsed compared with her left side (see blue arrows). This resulted in an asymmetric tip appearance. In addition, she had what is called a hanging columella. This implies the area in between the nostrils hangs down excessively (see shaded area). These abnormalities resulted from her prior surgery and were readily revealed once we opened up her nose. 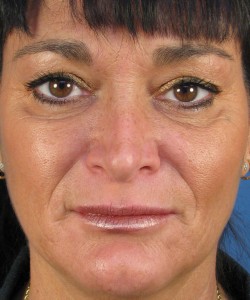 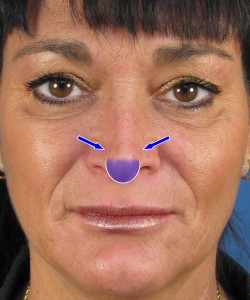 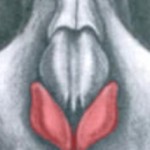 In the third photo below, I have morphed her intraoperative rhinoplasty photo to show more what her nasal tip cartilage should look like ideally. The width of the lower lateral cartilage should be nearly twice as wide as shown. With this amount of cartilage, there is sufficient support for the nasal tip so that pinching is not a real concern. In addition, the medial crus should be shorter so that the columella does not look like its hanging. In this particular case, I fully reconstructed her nasal tip using an open revision rhinoplasty technique with ear cartilage grafting. Fortunately, we were able to achieve a very nice surgical result. I look forward to showing you the postoperative photos 10-12 months from now. I hope this blog entry was helpful in showing you potential revision rhinoplasty patients what a pinched nasal tip and hanging columella deformity looks like in surgery! 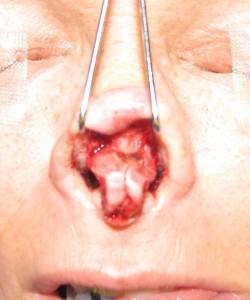 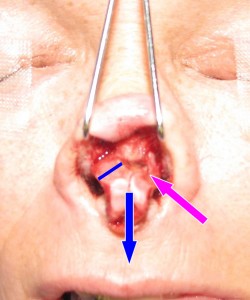 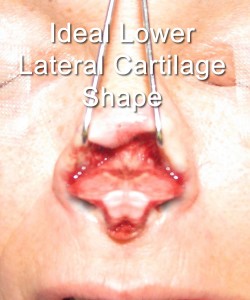