One of the most common complaints among patients seeking rhinoplasty is a dorsal hump and lack of tip projection. Because how common this is noted among rhinoplasty candidates, I decided to post a quick blog entry using a case example. Most of these patients present with a chief complaint of a bump along the bridge. When this is combined with poor tip projection, both issues can be exaggerated more than there are individually. For instance, in the patient noted below, she presented with a dorsal hump or bump as well as a tip that did not project out sufficiently. In many cases, these issues are not as apparent on the frontal view as they are on the oblique (or 45 degree angle) and side views. In the preoperative rhinoplasty photos below, make note of how the bump and tip issues are better appreciated when looking from the oblique and side views. The red arrows indicate the hump or bump along the bridge while the blue arrow indicates her lack of tip projection. Following rhinoplasty surgery, which included reduction of the bump and a minor revision to reshape the tip, you can notice an overall marked improvement. Again, this is mostly apparent on the oblique and side views as seen below. She now has a much straighter profile view along the bridge and her tip is now positioned further outward to give her more definition. Most importantly, her nose looks quite natural without visible signs of having had nasal reshaping surgery. 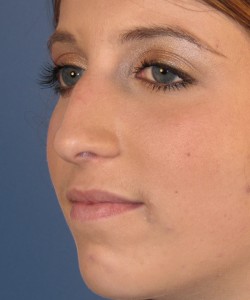 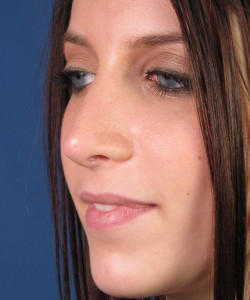 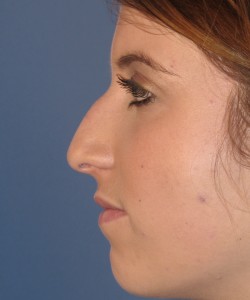 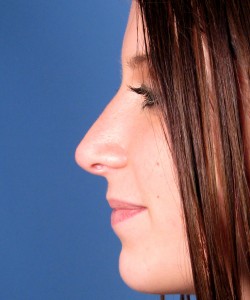