During many of my otoplasty (cosmetic ear reshaping) consultations in my San Diego, CA office, patients commonly ask about the incision placement. Obviously, one of the concerns when undergoing cosmetic ear surgery is the visibility of scarring. Fortunately, I happen to use an otoplasty technique where my incisions are kept essentially entirely behind the ear. I do this specifically so that I can hide the ear incisions and scars from being visible. The photos here demonstrate this point precisely. As you can see, this male otoplasty patient from San Diego presented with asymmetric looking ears (where his left ear stuck out much further than his right side) that were excessively prominent. I performed otoplasty surgery to pin his ears back so that they were in a more natural position. In addition, we wanted to make the ears more symmetrical. Although there is no one out there that has perfect symmetry of the ears, creating more symmetrical ears was a realistic goal in this case.

Before and After Cosmetic Ear Surgery

As you can see from his before and after cosmetic ear surgery photos below, his ears are markedly better now. The ears are clearly less prominent and the right and left ears are now much more symmetrical in appearance. I provided a view from behind his ears to visually demonstrate how all of this can be accomplished from entirely behind the ears. Notice the scars are barely visible when looking from behind him. Go ahead and click on the photo to see a close-up of how nicely the scars can be hidden during cosmetic otoplasty surgery. With additional time and healing, these scars become even less obvious to the point where they are blended very nicely with the surrounding skin. 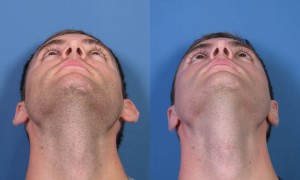 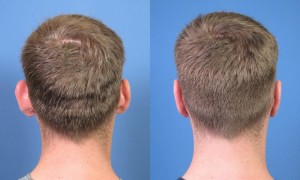 If you have overly prominent ears and are considering cosmetic otoplasty surgery, contact my office today for a complimentary consultation.