Here is a wonderful example of how a facelift procedure can take 10-15 years off of your appearance! 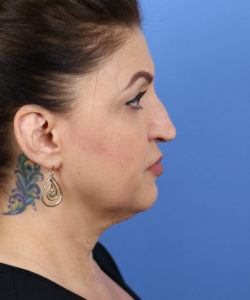 This very pleasant lady came to San Diego desiring to have some sort of cosmetic surgery to make her look more rested and rejuvenated. Her main issues – like many patients looking to have a facelift – centered around the jawline and upper neck. In particular, she was bothered by the excess fatty tissue under her chin and the sagging skin along the upper neck. Together, this anatomical issues caused a visible disruption of her once youthful jawline. Despite taking good care of herself and her skin, these type of changes became more and more obvious as the aging process started taking place. It was at this point that she decided to seek out a board certified plastic surgeon who could help her turn back the clock just a bit.

After consulting with Dr. Hilinski, she was recommended to undergo a lower face and upper neck lift procedure combined with liposuction or lipocontouring of her neck. In addition, Dr. Hilinski recommended other ancillary cosmetic procedures that would complement the facelift and necklift. This included transferring fat from her abdomen to her face. This was done to help restore some lost facial volume while targeting some areas of unwanted shadowing that were present through her midface region (under the eyes and in the mid cheek). As we say in the world of plastic surgery – volume is a sign of youth! In addition, she wanted her nose reshaped to take some attention away from it.

Dr. Hilinski ended up performing that precise combination of procedures. The lower face and upper neck lift was done to provide her with a more youthful jawline and neckline. This required removal of excess fat underneath her chin. If we stopped there, her neck skin would just hang down – making her look even older in some sense. Therefore, Dr. Hilinski performed a classic lower face and upper neck lift – often times referred to as a ‘rhytidectomy’ in plastic surgery terms. Rhytid means wrinkle. So rhytidectomy implies cutting out the wrinkles or removal of wrinkles by way of lifting the skin and pulling it back.

It should be noted that many people use the word ‘facelift’ without really knowing what this term implies. In the world of plastic surgery, the term facelift implies a cosmetic surgical procedure that targets the lower face and the upper neck at the same time. In fact, when a plastic surgeon performs a facelift, it is very difficult to lift the lower face without lifting the upper neck at the same time. This is because the face and neck have multiple layers of tissue that are – to a great degree – a continuation of each other in the two different areas. So, for example, in the face there is a critical layer of tissue called the SMAS. The SMAS is an acronym for superficial musculo-aponeurotic system. This basically describes a thickened layer of tissue that runs along the lower face which separates (and connects) the deeper structures from the skin layer. This same SMAS layer continues into the upper neck and blends together with the platysma muscle, which spans a good portion of the entire neck. Since these two layers of tissue are essentially blended together, when you pull up on the SMAS layer of the face you will also be pulling up on the neck platysma muscle. That is why you will, to some degree, get a neck lift when you attempt to do a facelift procedure. So when you go to consult with your plastic surgeon about getting facelift surgery, keep in mind that your neck will be reshaped to some degree whether you like it or not! 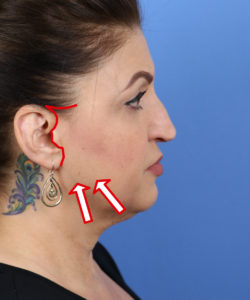 As is done in most facelift cases, an incision was made along the front border of the ear. This incision is shown in the attached photo diagram as a red line that starts in the temporal hair tuft before going along the junction of the face and ear. The reason facelift surgeons place the incision in this manner is because the scar will ultimately hide much better once it is finally healed. Go ahead and take a look at her scars in the photos shown below and you can see for yourself how well this scar heals in most patients.

The incision allows Dr. Hilinski to lift up the skin along the mid to lower face extending into the upper neck region. A second incision was made in her case just below the chin. This second incision was needed in order for Dr. Hilinski to remove the excess fat in this area using liposuction technique. The SMAS layer of tissue and platysma – previously mentioned above – were then lifted up in a more superior direction as is indicated by the arrows in the adjacent photo diagram. In doing so, her lower face and upper neck were literally lifted up and anchored into a more youthful position.

So what happens to the excess, redundant skin that was moved during the facelift? This is the only tissue that is cut out. The deeper SMAS and platysma muscle layers are lifted and repositioned, but they are not usually cut out. They are just sutured down in their new location. The redundant face and neck skin, in contrast, are actually cut out. In fact, the excess skin is trimmed in the exact pattern as the red incision outlined in the photo diagram. The cut edges are then very carefully sutured together, which results in the scar that is left behind.

Results of facelift surgery are typically seen as early as 2 weeks after the procedure. But at this point in the healing process, patients are still swollen and have moderate distortion of the tissues as a result of the facelift surgery. As time goes on, the skin and deeper SMAS and platysma layers will fully heal into their new, more youthful position. Keep in mind that nearly all facelift patients will see some degree of ‘settling’ in terms of their skin. Although plastic surgeons can lift and reposition skin into a more youthful location, the one thing they cannot account for is the patient’s skin elasticity – or rubber band quality. If the skin doesn’t have good ‘snap’ to it like a new rubber band, there will inevitably be some relaxation as the skin stretches a little bit. This skin relaxation may lead to more visible skin laxity than is desired – but is not the fault of the plastic surgeon. It is more a reflection of the patient’s inherent skin quality – or lack thereof. Despite this, most facelift patients will still enjoy a nice improvement that gives them a more rested, rejuvenated appearance as a result of the surgery.

In this case, the patient also went through some degree of skin relaxation after her facelift and neck lift. But fortunately for her, this was not to a significant degree. In fact, here are her before and after facelift surgery photos showing a beautiful, sustained rejuvenation nearly 1 1/2 years after her surgery by Dr. Hilinski. As you can readily appreciate, she looks so much younger and more rested as a result of surgery. If you look specifically at her jawline, you will easily appreciate how her jowls are now markedly improved. As you inspect her jawline in even more detail, you can see how much more defined it is as she turns her head to the side. Whereas her jawline was previously disrupted, it is now much sharper with more uniform shadowing. And when you peek at her neckline, the excess fat is now gone having been removed by liposuction. Her redundant neck skin was then lifted up and back to give her a tighter looking neckline, which is now much closer to a 90 degree angle than it was before facelift surgery.

And overriding all of these amazing improvements is the fact that she still looks very natural after facelift surgery by Dr. Hilinski. In fact, if you just stare at her ‘after’ photos, you could hardly tell that she has had any cosmetic face surgery. She just simply looks younger and more vibrant. There are no stigmata of being pulled too tight and/or looking stretched and fake. She still looks like the woman she was before she came to Dr. Hilinski – just a more refined, defined and beautiful version of herself. And after all is said and done, this is the essence and measure of incredibly good facial plastic surgery. 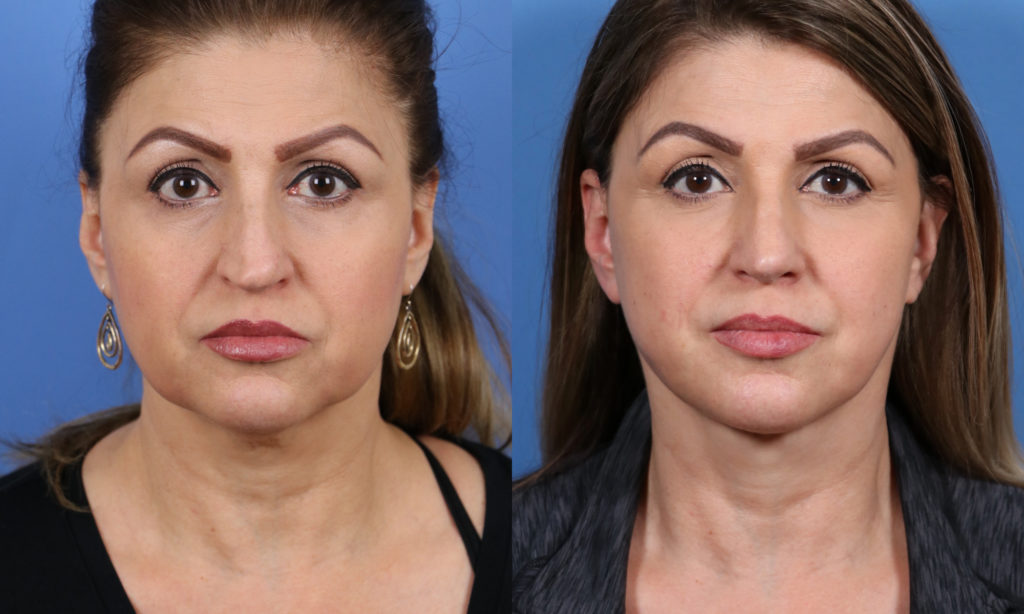 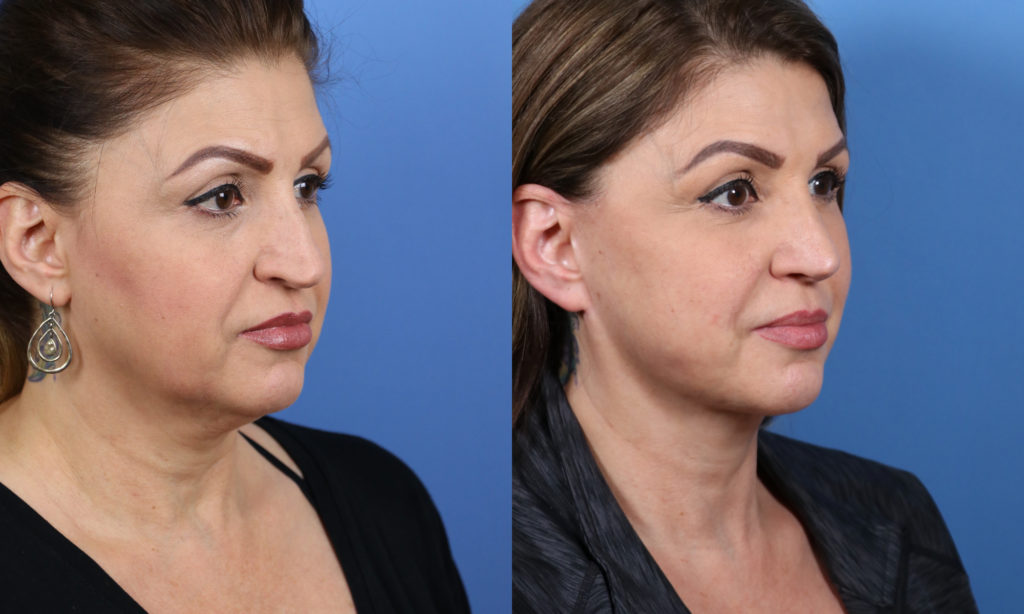 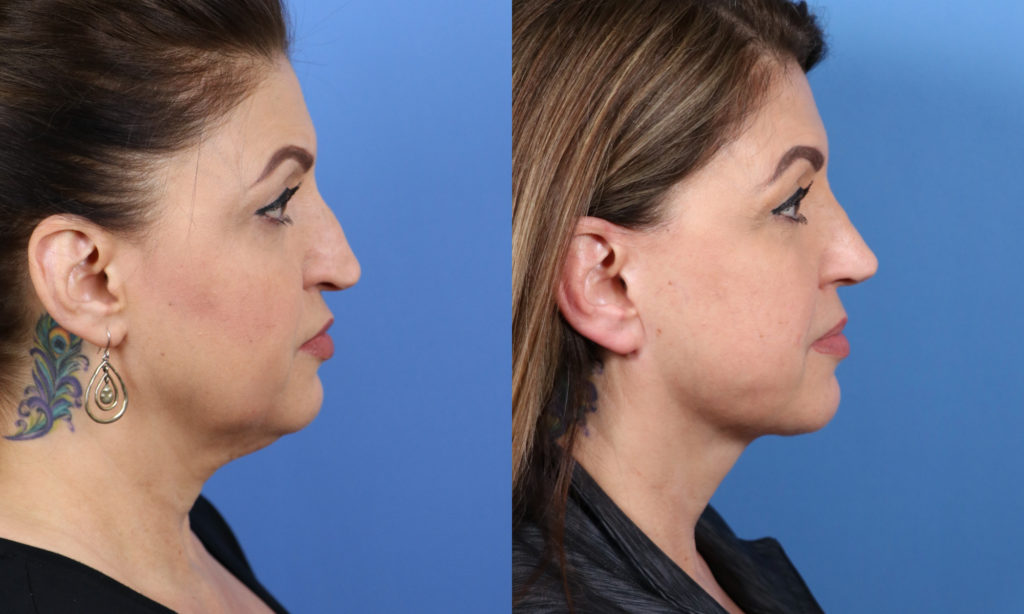