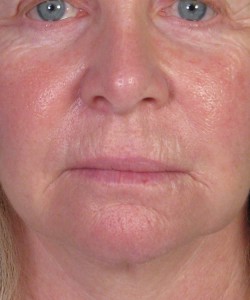 This is another great example of how a subnasale upper lip lift can be used to treat an excessively long upper lip (elongated upper lip). This female from San Diego, CA came to me requesting a shorter upper lip. She simply did not like the fact that her upper lip was too long when seen from the various angles. If you look at her upper lip, you can appreciate the fact that it is, indeed, too long for her face. Just look at the distance from where her nose ends and where the red portion of her upper lip starts. Based on this, we decided to perform an upper lip lift to shorten the vertical length of her upper lip. This was done with a subnasale upper lip lift technique where an incision is made under the nose. This is done to conceal the incision as much as possible. In this particular case, the upper lip shortening procedure was done with removal of nearly 7-8 millimeters of skin – leaving behind nearly 15 millimeters of her upper lip. You can see her before and after lip shortening photos below. As you can now tell, her upper lip is much shorter and in better balance with her surrounding facial features. You can really see this change on her side view, where the actual vertical height of the upper lip is obviously shorter now. The subnasale lip lift also provides her with a more enhanced red lip appearance (her upper lip now looks more volumized) as seen from the frontal view. You can see that her incision is slightly red still at this point in time, which is not bad considering she is only about 8 weeks out from surgery. With more time, the scar will continue to fade to become barely visible at nearly one year out from the lip lift surgery.

Before and After Subnasale Lip Lift Surgery 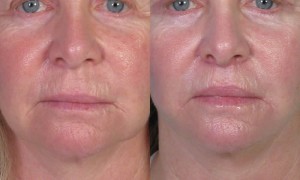 Before and After Lip Shortening Surgery 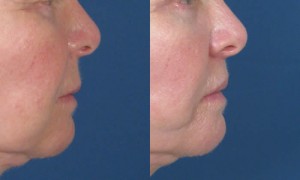