Dr. Hilinski continues to expand on one of the largest rhinoplasty photo galleries in San Diego with the addition of the latest example of finesse rhinoplasty surgery. This young female from San Diego desired cosmetic nose reshaping surgery to simply make her nose look more refined for her face. 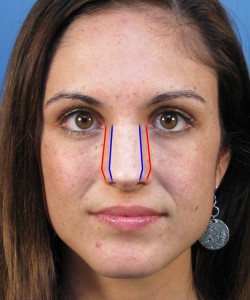 Specifically, her nasal bridge was too wide as seen from the frontal view (and she had a small bump on the bridge). If you look at the adjacent photo shown here, you can appreciate that her nose was too wide for her face. Overall, she is an attractive female, but her nose was out of balance with her surrounding facial features. This is shown in the diagrammed photo where the red lines indicate the actual width of her nose and the blue lines indicate the approximate desired width that would provide a more refined nasal appearance. Dr. Hilinski, an expert in finesse type of rhinoplasty surgery, performed the nose reshaping procedure to provide her with a nice cosmetic enhancement including narrowing of the nasal bridge. The rhinoplasty surgery was done in this case with a closed approach – where no incisions are made externally on the nose. Her nasal bridge was reshaped by gently sanding it down while the bones were moved inward. These rhinoplasty maneuvers were performed using a finesse technique so there was not a dramatic change in her appearance. In many ways, this type of finesse cosmetic nose surgery is actually more difficult than performing rhinoplasty where a significant hump, for instance, is reduced. This is predominantly because the margin of error is markedly less in someone with a face and nose like hers. Because of this, only finesse changes can be tolerated to create a nose that looks more shapely, yet natural looking. You can see in the before and after rhinoplasty photos in this case example how the nose now appears more narrow and refined on the frontal view. Look specifically at the width of her nasal bridge – she now has a more attractive nose that shadows much better than it had prior to rhinoplasty reshaping. This type of change is largely a result of the osteotomies that were performed during surgery – where the nasal bones are intentionally broken in a controlled manner and narrowed appropriately. As you can see in the photos, she still very much looks like her old self. But she now has a nose that is more in balance with her facial features with improved definition. If you have a nose that you think might benefit from finesse rhinoplasty surgery like this one, feel free to contact one of San Diego’s finest rhinoplasty surgeons today! 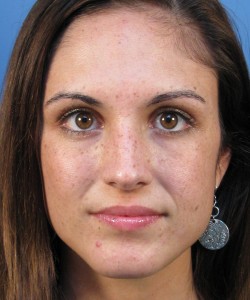 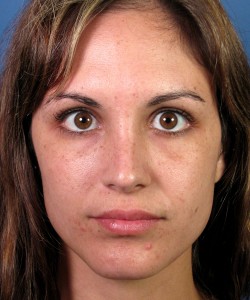 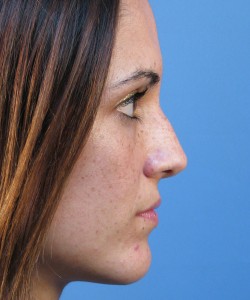 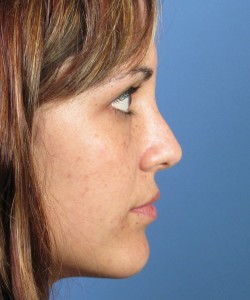