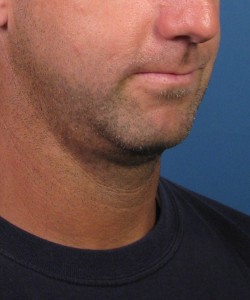 This is a great case example of how to perform a neck lift on a patient using a combined surgical approach. This particular male patient from San Diego, CA desired a more defined neck line. On examination he was found to have evidence of excess fat under the chin as well as a poorly shaped muscle, called the platysma muscle. Furthermore, he had less chin prominence than average. We discussed the various options available to him to provide a cosmetic enhancement of his neckline. Ultimately, he decided on a combined approach, which is what was performed on him. This included neck liposuction (also called cervical liposuction), tightening of the platysma muscle (called platysmaplasty) and placement of a chin implant to augment the jawline (also referred to as a mentoplasty). Following surgery, he was noted to have a significant enhancement in his neck and jaw region, which is precisely what he desired going into the procedure. To see his dramatic improvement from this combined necklift surgery, use this link here.