Learn here from San Diego’s #1 Coolsculpting practice why CoolMini is so much better than Kybella for that pesky double chin deformity. A double chin is also commonly known as excess submental fat – where sub = below and mental = chin – so under the chin.

The Truth About Kybella

Let’s start off with the truth about Kybella treatment.

This was an incredibly popular medspa treatment that was highly touted when it first hit the U.S. market as the next best treatment for a double chin. It was marketed as a minimally invasive, office-based injection (or shot) that would simply melt fat away – helping to get rid of excess fat in the upper neck region without any surgery.

Unfortunately, keen marketing helped establish and perpetuate the notion that Kybella could get rid of a double chin in just one injection treatment session – which was not the case. Any facial plastic surgeon who had performed mesotherapy at some point in their career knew very clearly that Kybella treatment would require an actual series of injections to effectively treat a double chin deformity – not just one session. Yet, most of the Kybella ads seen out there gave prospective medspa patients an inaccurate impression of how the treatment really worked. Based largely on these ads, patients were flocking to medspas and doctor’s offices to get their magical Kybella injection to get treat their double chin. Does Dr. Hilinski offer Kybella? He does – but he only recommends this after a true discussion has taken place with the patient regarding the truth about Kybella.

The reality was that Kybella truly needs 4-5 treatments in order to get any substantial improvement in a double chin deformity. Yes, that is right, Kybella requires 4-5 different office visits that are each separated by 4-6 weeks. If you look back at the clinical trial data for Kybella, you will see that more than half of the patients required 4 or more sessions to get a substantial reduction in their double chin. Do some patients get improvement in their double chin after 1 or 2 Kybella injections? On occasion, yes, you will see some patients see a visible reduction in the neck fat after just a couple of Kybella shots. But that is not the norm – and it is not the recommendation by most medspas performing Kybella treatment.

You also have to keep in mind that these are Kybella injections. Yes, we said injections. Meaning a needle is used to puncture your submental skin as the Kybella is deposited into the double chin fatty layer. Although a real tiny needle is used, there are between 10-20 actual injections done at each Kybella office visit. This can add up if you aren’t a big fan of needles – and, after all, who is?

In addition, many patients weren’t aware of the fact that there really is some downtime with Kybella double chin treatment. For example, wherever the Kybella is injected, you will likely notice some burning sensations and discomfort that may last for several days. Furthermore, the tissue injected with Kybella can become somewhat dense and hard. We call this induration in the world of plastic surgery. What that translates into is an area under the chin that can look swollen and lumpy where the Kybella was placed. In some cases, this can be somewhat dramatic for certain patients. And this visible swelling can last several days after your Kybella injection before beginning to soften up. So there is some ‘recovery’ from Kybella treatment. Although it isn’t like a surgical healing, it nonetheless may limit your public appearance for even a few days. And this happens after each and every Kybella treatment session! So as you start to add up the true recovery from Kybella, you must multiply the number of treatments that are really being done (4-5) by the number of days of true downtime.

Let’s also not forget the economics of Kybella double chin treatment. Since you can’t just get one Kybella injection and get rid of your double chin, you need to calculate the real cost by multiplying the number of treatments by the expense for each session. On average, Kybella treatments can cost about $1000 per office visit. If you ultimately need 4-5 sessions to get rid of your double chin, that can be upwards of $5000 in total for Kybella. This figure has to be weighed against the costs (and recovery, or lack of recovery) of other treatment options, such as CoolMini.

Like Kybella, CoolMini is an FDA-approved medspa treatment for treatment of a double chin. Meaning, both are established, effective options to get rid of unwanted fat under the chin. However, you have to look more in-depth into the nuances of CoolMini to understand why it has so many more advantages over Kybella.

No Needles With CoolMini

First off, CoolMini truly is non-invasive. This means there are no needles and no skin puncture at all with CoolMini – which also means no pain from needle pokes. Instead, the CoolMini device (as shown above in the graphic) is gently placed under the chin and secured in place with a strap. The CoolMini treatment is then performed and you are done! That’s it. In fact, our Coolsculpting room is set up so that patients can comfortably get treated while watching television and/or playing on their phone. Is there pain associated with CoolMini? Some patients note a mild, fleeting cold sensation as the temperature drops quickly to freeze the unwanted fat. The submental area then does numb. But beyond this there is no comparison to the multiple needle injections required for each Kybella treatment session.

Now, not all Coolsculpting practices offer CoolMini – since this is a specially designed adapter that was developed specifically for freezing submental fat. Dr. Hilinski and his medspa staff do, in fact, have the CoolMini adapter and treat the double chin deformity on a very regular basis. This is yet one more reason why you should choose the #1 office in San Diego for Coolsculpting services.

No Downtime With CoolMini

Another big advantage of the CoolMini is the fact there is really minimal downtime with double chin fat freezing. Immediately after getting CoolMini with our expert medspa staff, you may see some pinkness or redness in treatment area. But this quickly subsides. And compared with Kybella, CoolMini has much less swelling. In fact, CoolMini patients can resume public appearance immediately after treatment with no real restrictions in terms of physical activity.

How about the number of CoolMini treatment sessions versus Kybella? In most patients seeking double chin fat reduction, CoolMini is done over two (2) office visits to achieve a notable visible improvement. The two CoolMini office visits are spaced apart by 4-6 weeks typically.

So compared to Kybella, it takes less than half the number of office visits when getting CoolMini done. Do some CoolMini patients elect to do more than those two treatments? Indeed, we do have patients who want to get even more reduction in the double chin deformity and choose to get more CoolMini treatments. But even including these patients, the average number of office visits is less with CoolMini versus Kybella.

Comparing the costs against Kybella, CoolMini is clearly the economic winner. For two CoolMini sessions, retail cost is about $2000. Even if you elect to undergo four (4) CoolMini treatments, you will likely end up paying less than you would for 4-5 Kybella injection sessions. Is there special pricing and promotions that can drive this cost lower? On occasion, yes, you can find some really great specials on CoolMini that can make it even more financially attractive as a treatment for your double chin. Contact Dr. Hilinski’s medspa staff today to see about special pricing offers on CoolMini, in particular.

One more significant reason to choose CoolMini distills down to the actual results you may get from freezing double chin fat. Most patients with a double chin don’t realize that the skin is also an important factor in the equation. Yes, getting rid of the submental fat is key. You can get rid of the unwanted double chin fat with a variety of methods as described. But if the skin in the submental area does not ‘shrink down’ as desired, it may leave you with a sagging neck that can look even worse.

Fortunately, CoolMini is FDA-approved to tighten the double chin skin at the same time as it is freezing the fat away. In some patients, you can just look at the neck after CoolMini and visibly see in the photos how the skin has tightened up very nicely. Take a look for yourself at the CoolMini photo examples shown before – that are proof that CoolMini can make a huge improvement in your double chin deformity.

This is a huge bonus when it comes to choosing CoolMini for your double chin deformity. 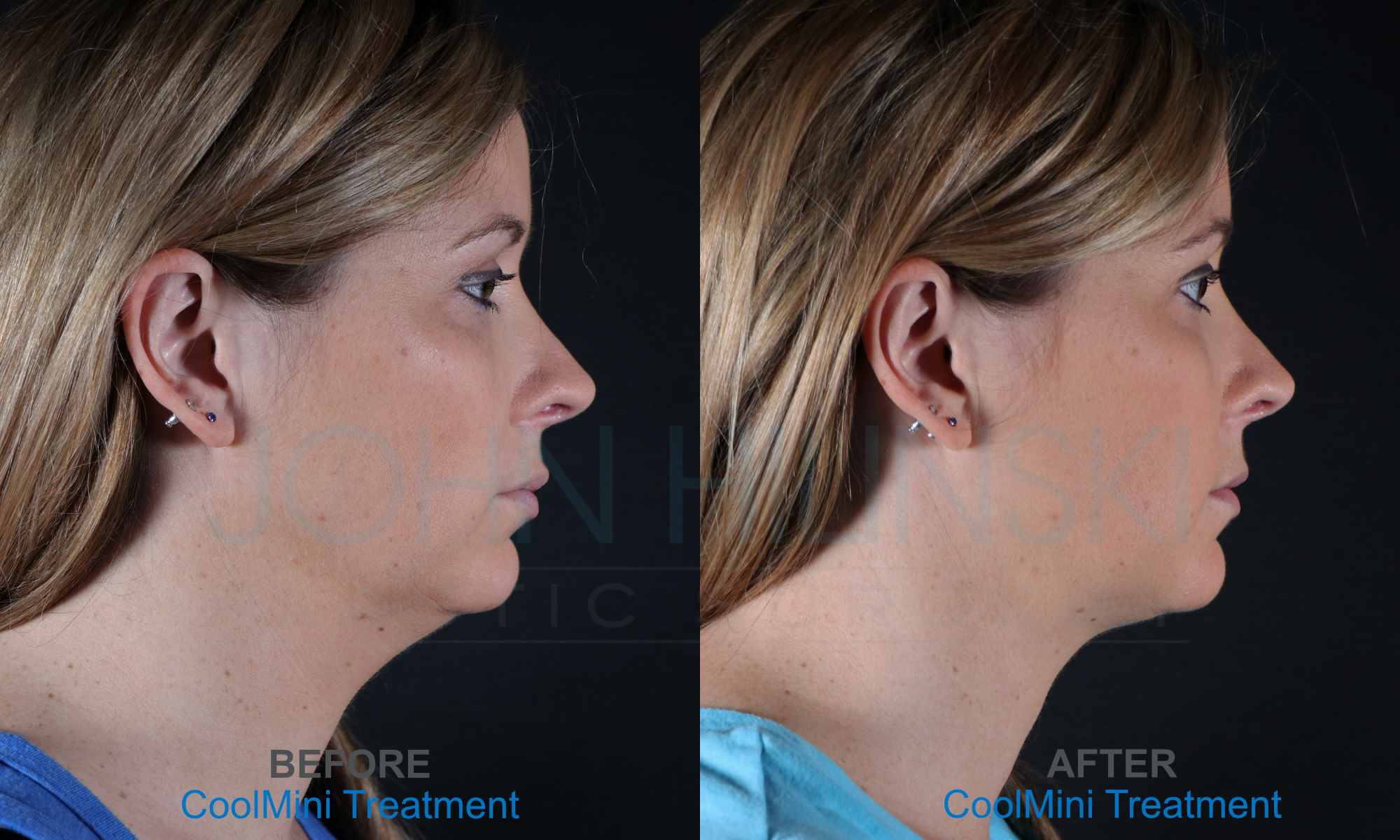 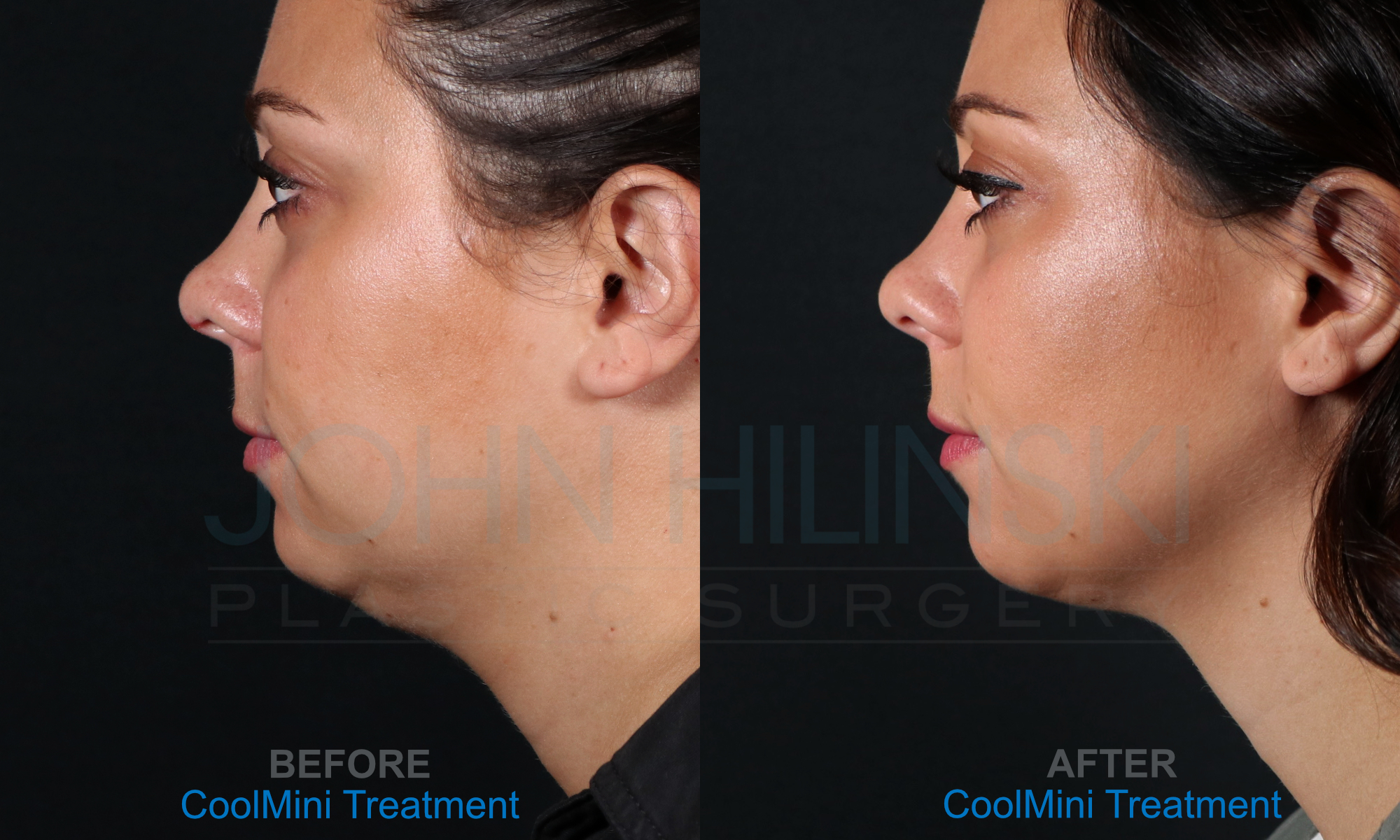 At the end of the day (and the comparison!), you can readily see how and why we recommend CoolMini as the better option for treating your double chin in San Diego. So now that you clearly know the benefits of CoolMini over Kybella, it is just a matter of scheduling your complimentary consultation with San Diego’s best Coolsculpting team – headed by Dr. Hilinski and his medspa staff.