Many patients seek out plastic surgery of the neck because of what is often times referred to as a double chin deformity. A double chin simply refers to an excess prominence or fullness underneath the chin due to unwanted fat. 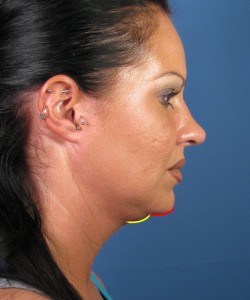 This is visually demonstrated in the adjacent photo diagram of an actual patient. As you can see, her normal chin contour is outlined in red. Her ‘double chin’ refers to the second prominence seen just behind the first as outlined in yellow. The reason the double chin is considered undesirable is because it detracts from an, otherwise, well-defined youthful jawline and neck. Many patients who have a double chin are actually in fairly good shape and are not considered overweight. This small pocket of fat under the chin is just a tough area to target with continued weight loss and exercise. In some patients, no matter what you do physically to get in shape, this prominence under the chin may persist. In fact, this is the best type of candidate to undergo a liposuction or liposculpture procedure – someone who has worked very hard to get in shape but simply cannot achieve the results desired through exercise and diet. In these instances, surgical reshaping of the chin and neck region is a viable, recommended option. In patients like this, cosmetic reshaping is performed to reduce the unwanted fullness under the chin while also trying to create more definition along the jawline. Sometimes this requires liposuction alone where the fat is removed with specialized surgical instruments. In other cases, liposuction is combined with tightening of the muscle under the chin – termed a ‘platysmaplasty’ (the muscle is referred to as the platysma). In the current patient example, the latter procedure was performed to help reshape her neck and jawline to provide a more rested, youthful appearance. Her before and after neck liposuction photos are shown here. As you can see, her frontal view does not change significantly, but she does have an improvement in the definition of her jaw as seen on from this angle. When you start looking at her oblique (45 degree angle) and lateral view, there is a more obvious improvement that can be seen in terms of the area under the chin and along the jaw. Look specifically at the diagrammed photo comparison of the oblique view that highlights in blue how her jawline has now been brought out into view following the procedure. The beauty with this type of cosmetic enhancement procedure is that the incisions (scars) are hidden under the chin and behind the ears with minimal visibility following surgery. As is demonstrated in this photo series, this particular female patient from San Diego, CA has an obvious yet natural looking cosmetic improvement from combined liposuction and platysmal tightening of the neck. If you are interested in undergoing a similar type of cosmetic surgical procedure to improve your upper neck and jawline, feel free to contact one of San Diego’s experts in facial plastic surgery, Dr. John Hilinski, at 619-296-3223. 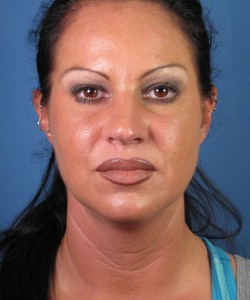 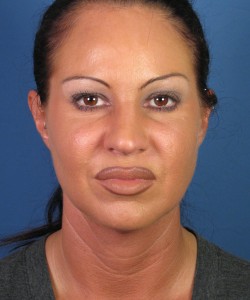 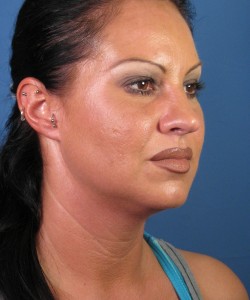 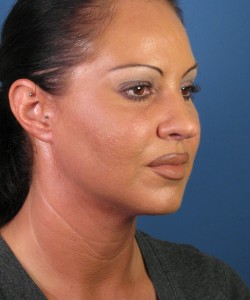 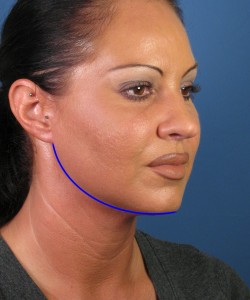 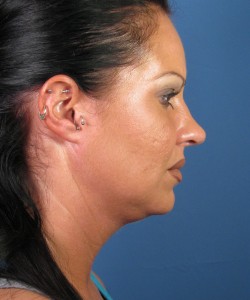 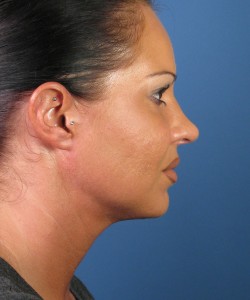