This is a great case example focusing on some of the nuances of performing facelift and neck lift surgery. This patient, who was in her early 70s when she consulted with me, desired to simply look younger and more rejuvenated. She was already considered an attractive female – she just wanted to look her best for her age.

As you can see from her preoperative photo, she demonstrated the classic signs of aging that commonly prompt patients to seek out a facial plastic surgeon. This included lower face skin sagging and jowling (A), upper neck skin laxity (B) and submental/submandibular banding (C). This classic triad accounts for a great majority of patients her age seeking to undergo cosmetic face and neck enhancement surgery.

Her and I discussed the options available to her – which really distilled down to face and neck lift surgery. Although there are a good number of non-surgical devices and treatments currently available (such as Ultherapy®, ThermiTight®, etc), none of them can realistically substitute for face and neck lift surgery. These devices, which are aggressively marketed by many plastic surgeons, will provide for a modest (and sometimes very temporary) improvement in the jaw and neck line. But they are really no comparison to true rhytidectomy surgery.

This patient ended up undergoing what is considered a fairly standard facelift operation. When we, as plastic surgeons, mention the term ‘facelift’ surgery, what we really mean is ‘lower face and upper neck’ surgery. Meaning, this type of cosmetic facial enhancement surgery truly only targets the lower one-third of the face and the upper one-third of the neck. This is diagrammed above and represented by the area between the two yellow lines. This type of facelift surgery will not provide improvement to the brow, midface and lower neck regions. If you are seeking improvements to these other areas, this would necessitate other cosmetic procedures intended to specifically target these regions.

The results of her lower face and upper neck lift procedure are shown below. But I wanted to take this opportunity to point out one particular concern that many patients have regarding outcomes from this type of facial plastic surgery – abnormal positioning of the ear. So many patients are worried about looking overly done after a facelift with that dreaded windblown look that still somehow appears in this day and age following excessively aggressive pulling of the face and neck. As I tell patients all the time, you almost have to go out of your way to create this scenario as a facial plastic surgeon. Fortunately, with good technique, this type of outcome can almost always be avoided following facelift surgery. But another thing that we, as surgeons, look to avoid is abnormal positioning of the ear. What I am referring to here is how the ear position and shape may change as a result of the facelift surgery. When plastic surgeons lift the lower face and upper neck, they do so by suturing the deeper soft tissues. These sutures are anchored high up in front of the ear as well as behind the ear (as shown by the yellow arrows). In doing so, surgeons should be careful so as to avoid ‘pulling’ the ear down and forward in this process. If this occurs, the ear will look as if it was repositioned lower down on the face – closer to the angle of the jaw (the red asterisk). The ear will appear as if it was rotated down and forward (clockwise on the left side and counter clockwise on the right side). The ear will also appear elongated – and sometimes even bigger in overall size. The adjacent photo is a morphed image of the current case study patient showing what this type of ear can look like when it the shape and position has been altered as a result of the lift procedure. Ideally, the ear will look as if it has changed very little after facelift surgery. It should be the same relative size in its same relative location on the side of the head. In this particular case, you will see below how her ear looks to be essentially unchanged in terms of shape, size and position. Compare that image to the one above and you will be better able to appreciate this point.

Facelift Neck Lift Before and After Photos 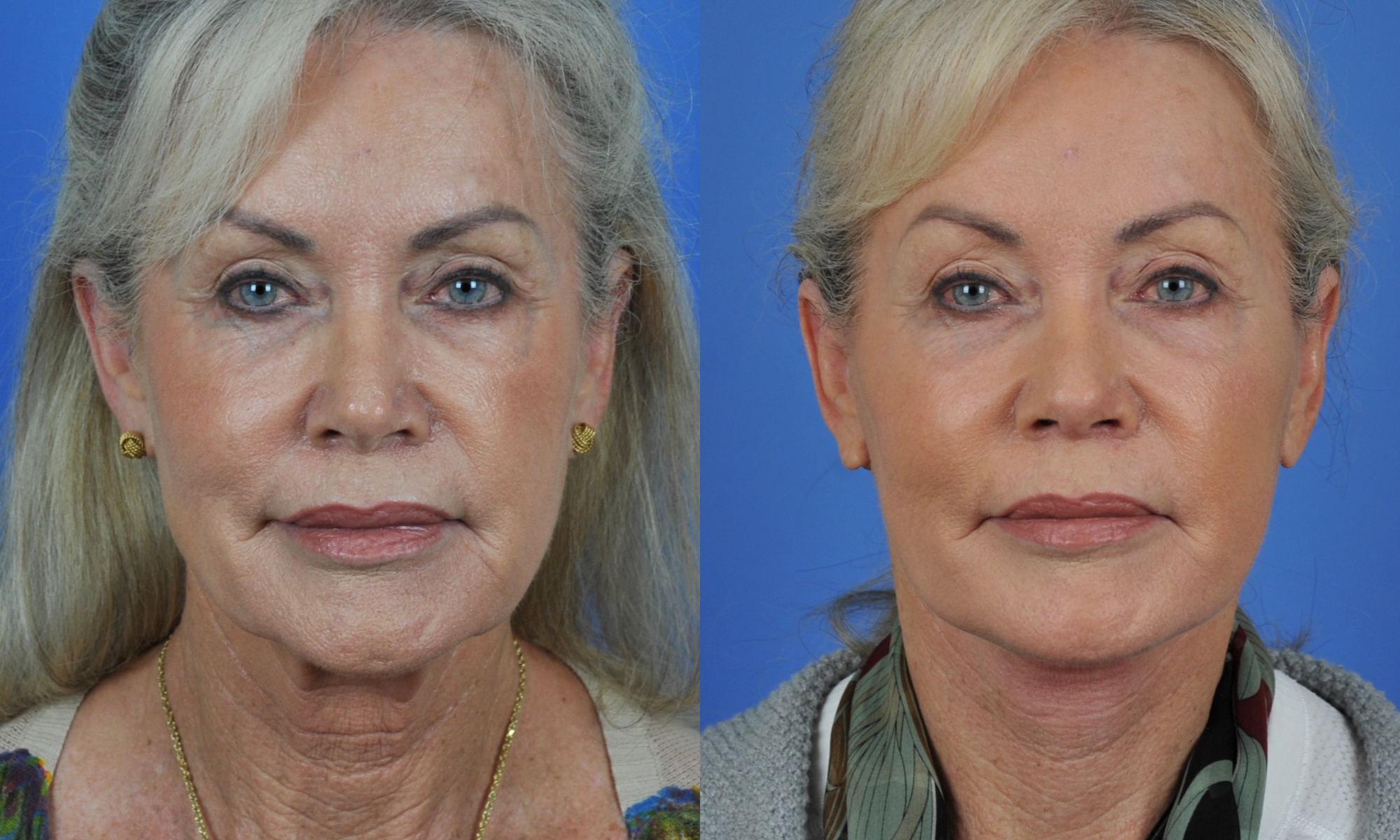 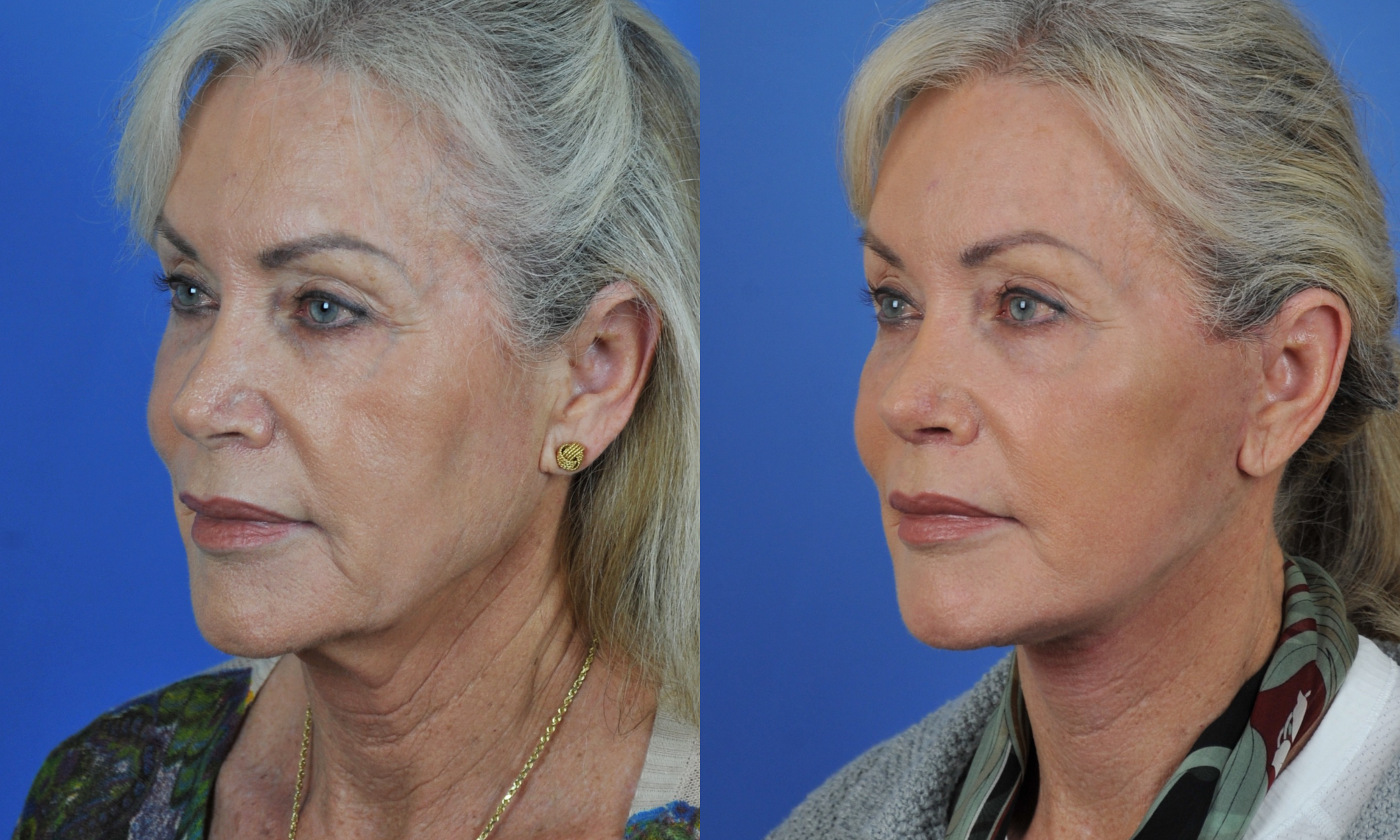 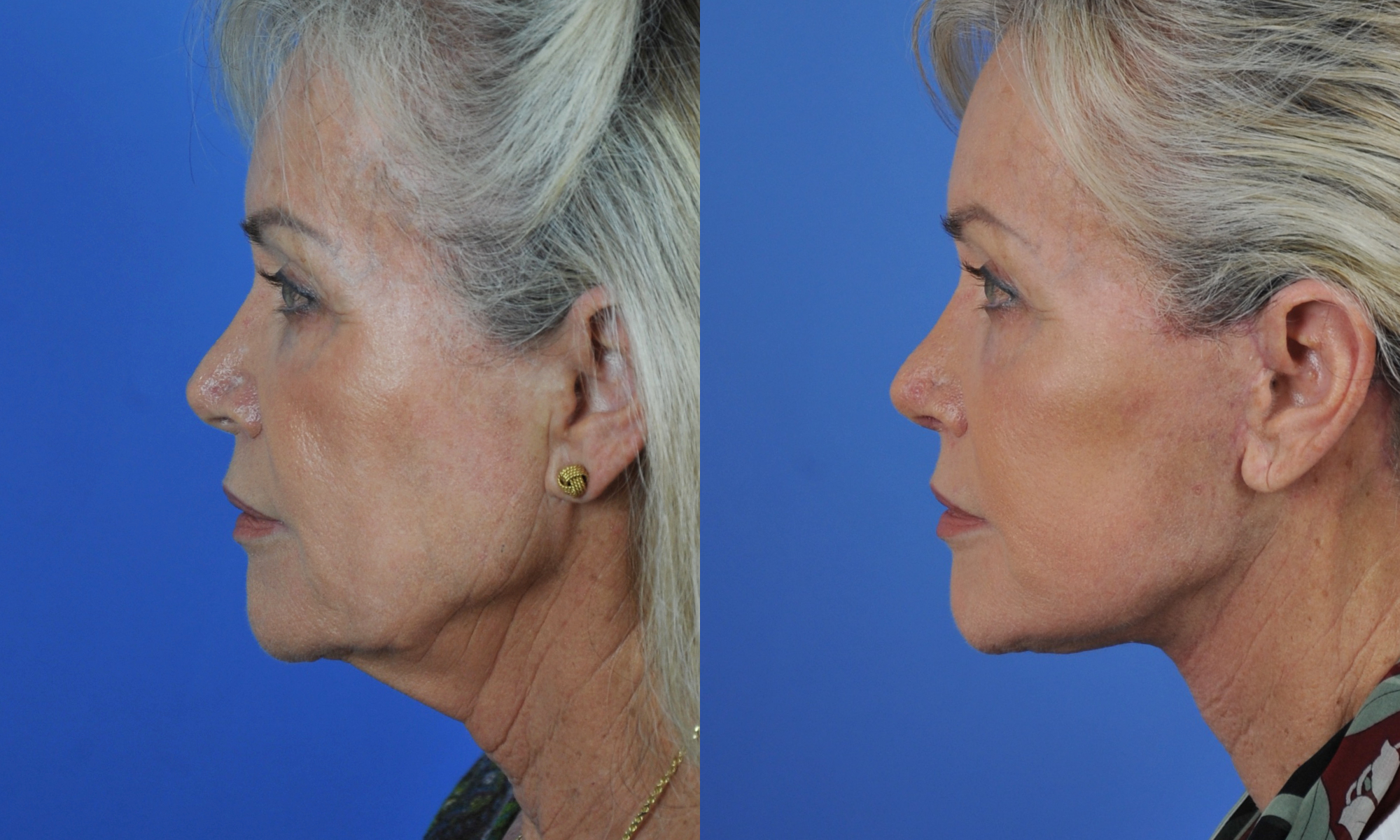 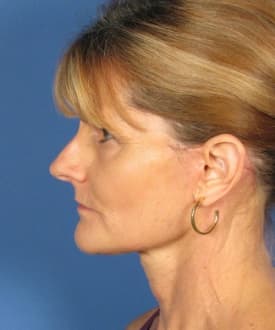