This is a case example of a San Diego patient who underwent neck liposuction combined with platysma muscle tailoring (called a platysmaplasty). Many patients and plastic surgeons consider this surgery one form of a necklift procedure. For any patients considering this type of plastic surgery, we hope this particular patient example proves useful in helping to make a more educated decision.

The patient is a middle-aged female who desired more definition along her lower face and upper neck region. However, she was not enthusiastic about having to consider an actual ‘facelift’ procedure. She was hoping to have a enhancement procedure that was less invasive than a facelift, but would provide her a nice cosmetic improvement in terms of the jawline and neck. After consulting with her in our office, it became more evident that what she was really bothered by was the unwanted fullness under her chin region. 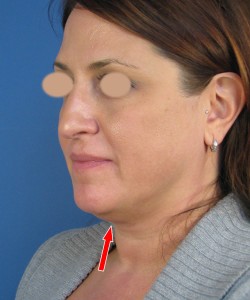 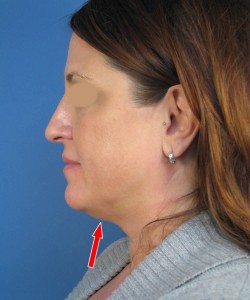 Looking at her preoperative photographs, she does have some loss of definition along her jawline and upper neck. This can be better appreciated when you look at her oblique (angle) and profile (side) views as indicated in the diagrams by the red arrow. In the world of plastic surgery and cosmetic enhancement, this area is called the cervico-mental angle, and is a common target for necklift surgery. This is the angle that is created by the junction of the horizontal jaw and vertical neck. In terms of esthetic ideals, most patients desire to have cervico-mental angle as close to 90 degrees as possible. This is the type of angulation that translates into improved shadowing along the jawline and upper neck with a more cosmetically pleasing appearance overall. 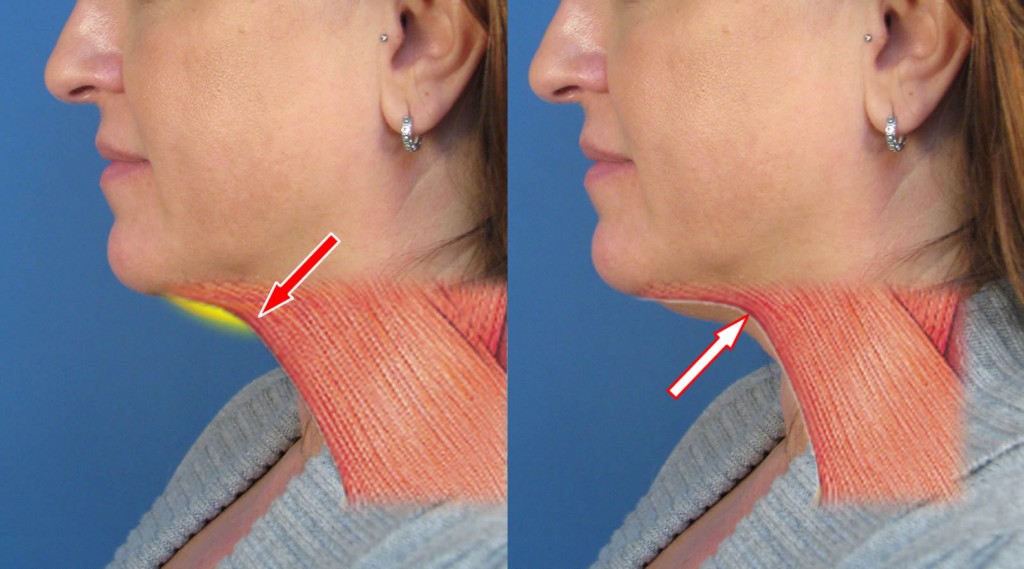 In our case example, her physical examination showed this extra fullness to be partially from excess fat in the region. This is indicated by the yellow shaded area in the adjacent diagram and referred to as submental (‘below the chin’) liposis, or excess fat. However, some of the fullness in this particular patient was also due to the platysma muscle hanging down from the jawline (red arrow). The platysma is a sheet of muscle that spans the neck on each side from the lower border of the jawline all the way down to the clavicle (collarbone). If the muscle is hanging down too low under the chin, it can detract from an, otherwise, more defined neck. Ideally, there is no excess fat in front of the platysma and the muscle is positioned tighter up underneath the chin to help create more of a 90 degree cervico-mental angle (right side of diagram as indicated by the white arrow). As in this particular patient, many people seeking to contour their neckline have a combination of unwanted fat (submental liposis) and platysma muscle drooping – both of which have to be addressed at the same time to provide a nice cosmetic enhancement in the neck.

In this case example, it was recommended that the patient undergo liposuction of the neck along with platysmaplasty. In some cases, neck liposuction is also referred to as ‘lipocontouring’ since removal of the neck fat is done with the intention of contouring the neck. Other plastic surgeons refer to this as ‘neck liposculpture’ because they feel like they are sculpting the neck. The platysmaplasty refers to reshaping of the platysma muscle – essentially tightening the muscle up underneath the chin. Some plastic surgeons will refer to this as ‘platysma muscle tailoring’ instead of platysmaplasty since the procedure involves careful stitching of the muscle.

This patient elected to undergo this exact combination of procedures – neck liposuction and platysmaplasty. The surgery was performed under a general anesthetic, which kept her quite comfortable while allowing us to accomplish all of the surgical goals with no distractions (like her moving or feeling pain). Some patients would rather have a deep intravenous sedation, which would work as well for this type of plastic surgery.

The liposuction portion of the surgery is done through a small incision made just underneath the chin. In her case, we also made a small incision behind the earlobe on each side (hidden incisions) so that we could perform microliposuction of the area along the jawline. Microliposuction, also referred to as ‘micro-liposuction,’ simply means that we use even small caliber liposuction instruments to perform finer contouring in certain regions of the face and neck. Liposuction involves use of a vacuum device connected to a specially designed plastic surgery instrument that allows removal of unwanted fat. This fatty layer is typically located just under the skin but above the muscle as is shown above in the diagram. Lipocontouring of this fatty layer is performed in a very careful fashion to reshape the neck and lower face. The key is to remove a sufficient amount of fat while leaving behind a thin layer to maintain a nice natural look following liposuction. It is also real important for the plastic surgeon to liposuction both sides of the neck to achieve as much symmetry as possible.

The platysmaplasty portion of her surgery was done through a slightly wider incision made in the same place as the liposuction incision under the chin. This is usually done after the excess fatty layer has been liposuctioned. The muscle can then be more easily visualized. There is a platysma muscle on each side of the neck as shown below left in the diagram. As mentioned above, the aging process and even congenital predisposition can account for the edges of the muscle (closer to the midline) hanging down under the chin. This is what contributes to an unwanted bulge in this area of the neck along with any excess fat that might be present in front of the plastysma. The platysmaplasty is performed by bringing the two muscle edges closer together as shown below right in the diagram. In some cases, a horizontal incision (cut) is made in the muscle on each side to help create a better angulation of the neck. The platysma muscle is sutured, or sewn, together as indicated by the blue threads and white arrows below right. Because this technique resembles the ties in a corset, some plastic surgeons refer to this as a corset platysmaplasty. By placing these sutures into the muscle, the platysma is tightened in an upward direction bringing it closer to the chin. This translates into a sharper angulation in terms of the cervico-mental angle with better definition of the lower jaw and upper neck. There is usually no skin removed during this maneuver, although in some cases a small amount of skin might be removed during the closure of the incision line. Altogether, combined liposuction and platysmaplasty surgery takes about 60-90 minutes from beginning to end. 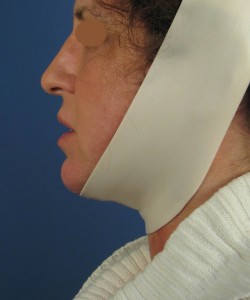 Following completion of the liposuction and platysmaplasty necklift surgery, a tight bandage is placed around the face and neck. This compressive bandage is intended to keep the skin and soft tissue in place while also preventing swelling. Keep in mind that this head dressing can be a source of pain and discomfort early on in the healing process. This initial dressing is typically left in place for 24-48 hours then changed to something that is much more comfortable. For instance, a foam wrap is commonly used after the first dressing comes off. The adjacent photo shows our case example patient in her foam dressing wrap 24 hours following the liposuction and platysmaplasty surgery. As you can see, the foam wrap is intended to place pressure under the chin and along the new cervico-mental angle. As mentioned above we typically do not cut out skin with this type of necklift surgery. Therefore, we rely on dressings like this to help encourage the neck skin to shrink wrap up to its new, more rejuvenated position.

Most patients are fairly comfortable on low dose narcotic medications, such as Vicodin or Tylenol with codeine, that are frequently stopped by day 3 after surgery. The sutures in the skin are removed in 4-5 days. Most neck liposuction and platysmaplasty patients feel fairly presentable in the public within 10-14 days of the surgery.

Before & After Necklift Photos

The following photos show our case example patient before and after liposuction and platysmaplasty surgery. As you can see on her frontal view, she now has a more defined jawline and chin. This is evidenced by a sharper demarcation along the lower border of her chin with more of an actual shadow now that the neckline has been lifted up. This same change can be also appreciated on her oblique angle. On the profile, or lateral, view of her neck there is also a nice cosmetic improvement noted. There is less fullness under the chin now that the submental fat has been liposuctioned and the platysma muscle pulled tighter. You can also see that her cervico-mental angle is now closer to 90 degrees further contributing to the improved definition along her lower face and upper neck. All this, without any obvious scarring and no skin removal. Overall, this patient was quite pleased with her surgical results, especially since she did not have to undergo a more formal facelift procedure to achieve cosmetic enhancement in her facial appearance. In fact, she now proudly displays her new profile image as her Facebook photo – something she was very reluctant to do in the past. 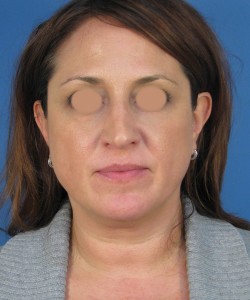 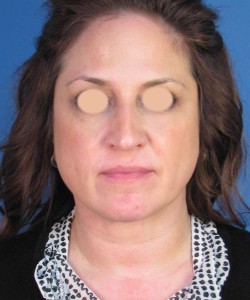 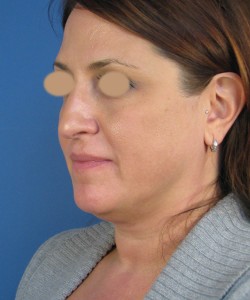 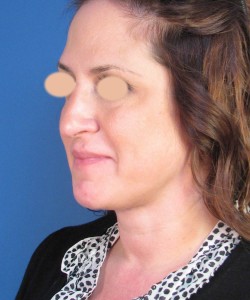 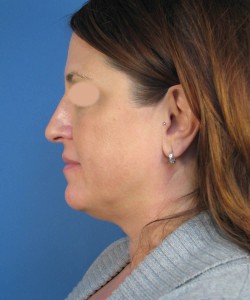 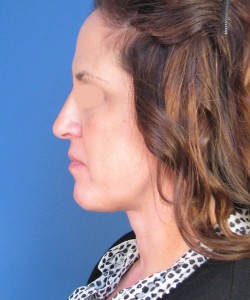