Thick Skin in the Indian Nose

One of the most common features that rhinoplasty surgeons encounter in the Indian nose is a relatively thick skin layer. Because Indian noses possess thicker skin, the underlying bone and cartilage need to be altered in a more deliberate manner compared with other rhinoplasty patients. The underlying framework of the nose requires more definitive changes so the final result will show through the thicker overlying skin layer. If surgical changes to the bone and cartilage are too conservative in the Indian nose, the desired new shape will not be readily visible.

Drooping Tip in the Indian Nose

Another common feature found in the Indian nose is a drooping tip. This is also frequently referred to as a ptotic nasal tip. This is usually best seen from the side, or profile, view where the tip of the nose can be seen to droop downward. If you look more specifically at the angle made between the bottom of the nose and the upper lip, it is commonly less than 90 degrees in the ptotic nose. This can make the Indian nose appear longer than desired and in some cases more aged in appearance.

Dorsal Hump in the Indian Nose

The Indian nose is also frequently noted to have a dorsal hump deformity. This refers to a bump on the bridge of the nose that creates a convex contour best appreciated when looking from the side view. A dorsal hump can also contribute to the nose looking longer than desired. When this is present in the setting of a droopy nasal tip, the overall appearance can be even further exaggerated.

Rhinoplasty for the Indian Nose

Indian rhinoplasty is intended to target those features of the nose that are bothersome while leaving alone the remainder of the nose to preserve ethnic consistency. In a majority of cases of Indian rhinoplasty, an open approach is my preferred technique. Using an open rhinoplasty approach in the Indian nose allows me more exposure of the nasal tip region, which often times requires moderate change as noted above. This includes use of cartilage grafting technique that is much more accurate when the nose is fully exposed via the open approach. In cases of Indian rhinoplasty where minimal tip work is being performed, a closed approach is certainly reasonable for reshaping primarily the nasal bridge.

This example of Indian rhinoplasty shows a male patient who had concerns with the bridge, tip and base regions of his nose. More specifically, he desired to have the dorsal convexity – meaning, curvature along the bridge – reduced. In addition, he desired some tip refinement for more definition and slight narrowing of the nostril base.

These changes were accomplished in this case with a closed rhinoplasty approach. As noted above, in cases where limited nasal tip work is being done, a closed rhinoplasty approach is reasonable. In this case of Indian rhinoplasty, the nasal bridge was reduced to create a straighter profile. The nasal tip was refined with use of cephalic trimming technique – meaning, the cartilage that comprises the nasal tip was trimmed along the upper edge to make the tip appear more narrow. As the nose healed, the scarring effect from the cephalic trim then rotated the tip upward to slight degree. In addition, the base of the nose was made more narrow by removing some of the skin from inside of the nostril on both sides. The overall effect was to provide him with a more refined look. As you can see from his before and after photos, his nose appears more defined. Yet, we have preserved his ethnic identity in that his nose does not look incongruent with his surrounding facial features. His nose still looks Indian – just a more defined and refined version of his old nose. 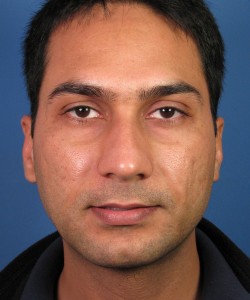 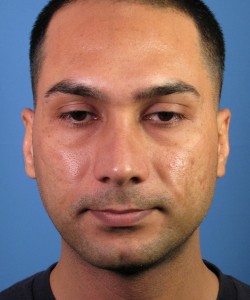 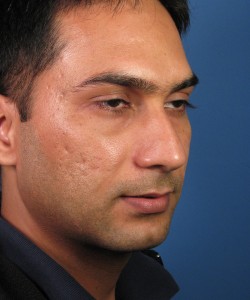 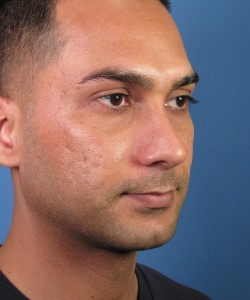 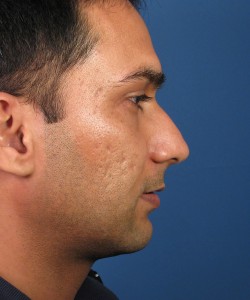 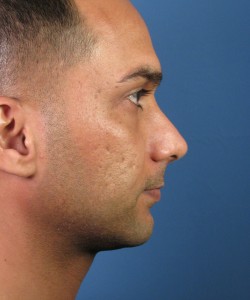 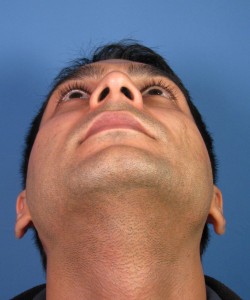 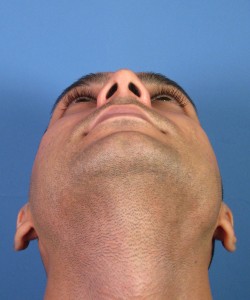 If you are Indian and considering cosmetic nose surgery, contact my San Diego office today to schedule a personalized consultation with me, Dr. John Hilinski. Over the years I have performed Indian rhinoplasty on a very regular basis to provide my patients with beautiful yet natural looking cosmetic results.