Persian rhinoplasty is a very specialized subset within the world of rhinoplasty that should only be performed by expert plastic surgeons who have dedicated experience in ethnic cosmetic nose reshaping surgery.

This female patient highlighted here is an example of Persian nose surgery that involved extensive reshaping of the nasal framework. 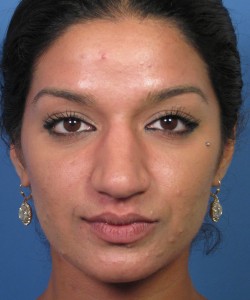 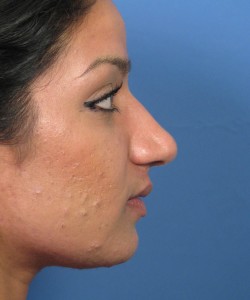 In this particular case, the patient noted several issues with her nose that she desired to have reshaped. First and foremost was trouble breathing through the nose. This was a consequence of a deviated septum as well as poor tip positioning. In addition, she was bothered by the fact she had a fairly rounded, broad nasal tip shape. But she was also unhappy with her broad, wide nasal bridge. These issues are readily seen in her preoperative photos shown here.

Looking more closely at the photos, you can appreciate several other problems with her nose. For example, her nasal tip appears quite droopy where it meets with the upper lip. This area is called the nasolabial angle, which is ideally between 95-105 degrees in a female patient. In this case, her nasal tip is closer to 90 degrees. On the frontal view, such a closed nasolabial angle translates into very poor nostril shadowing. That is because her nasal tip is angled downward too much. No one desires to have excess nostril visibility as seen from the front (the so-called dreaded pig nose). But it is quite normal to have at least some nostril show (visibility) when looking straight on at the face. In this case example, you can see she has essentially no nostril visibility – which is fairly abnormal and should be corrected.

Overall, these various anatomical issues contribute to her nose simply looking too large for her face.

After discussing with her the various options, this patient ultimately decided to proceed with a reconstructive septorhinoplasty surgery to hopefully make her nose function better while also creating a more desirable appearance.

It should be emphasized that it is very important when performing Persian rhinoplasty surgery that one does not attempt to erase all ethnic features of the nose. Yes, Persian patients are looking to address certain prominent features of their nose that they dislike. However, the goal in Persian rhinoplasty, as is the case in other forms of ethnic rhinoplasty, is to create a nose that still appears Persian – not one that suddenly now appears more Caucasian.

In this case example, an open rhinoplasty approach was utilized in order to provide optimal exposure of the cartilage and bone framework. The areas of bulging along the sides of the bone were rasped conservatively – meaning, they were sanded down to create a smoother contour. This is shown visually in the adjacent diagram where the red hatched lines indicate the area of rasping on both sides. Next, the nasal bones were then reshaped to bring them in closer to one another. This is indicated by the yellow broken lines corresponding to the medial and lateral osteotomies used to cut the nasal bones. In doing so, this helped to address the excess width seen along the upper one half of her nose. Her nasal tip was then reshaped and repositioned. This included trimming off some of the excess volume as shown by the red strips in the adjacent diagram. At the same time, her nasal tip cartilage was sutured on both sides (indicated by green markings) to create a more narrow shape and contour. Finally, the entire nasal tip was rotated upward and repositioned along the caudal septum as shown by the white arrows. Inside of her nose, a full septoplasty was performed to help improve her obstructed nasal breathing. Combined, these maneuvers allowed for complete transformation of her nose – inside and out. 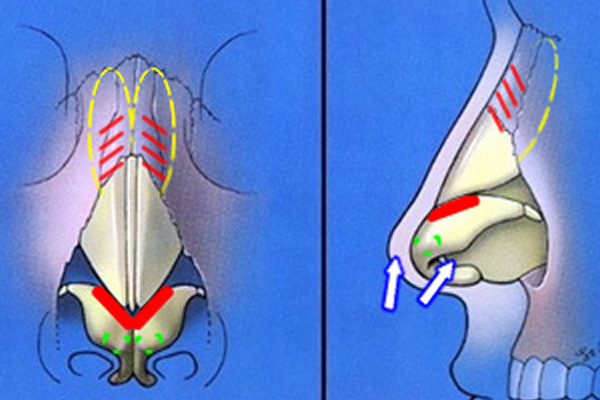 The results of this Persian female’s septorhinoplasty can be seen here and represent very stable results close to one year out from her nose surgery. As you can see, nearly all of the preoperative issues have been successfully addressed as a result of the surgery. For example, her nasal bridge is much smoother in contour now that the excess bony prominences have been removed. Narrowing the nasal bones has helped further in this process. Reshaping and repositioning the nasal tip has allowed for her to have much better definition and refinement despite her very thick Persian skin. If you once again look at her nasolabial angle, it is now more appropriately around 95 degrees – creating just enough nostril visibility, or show. Lifting and rotating the nasal tip in this manner can have a huge impact on one’s nose as seen here.

Overall, you can readily see that her nose now appears smaller and more proportional for her face. Yet, she still looks Persian with a nose that is ethnically consistent with her surrounding facial features. 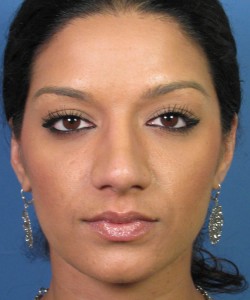 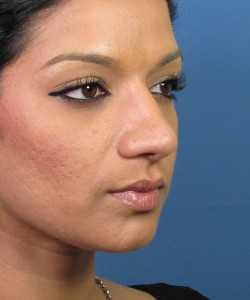 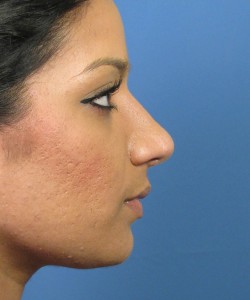 If you are Persian and looking to have functional and/or cosmetic nose reshaping surgery, do not hesitate in contacting our San Diego office today for a personalized consultation.