Nasal tip ptosis (pronounced ‘toe-si s’) simply refers to a drooping or dropping nasal tip. Nasal tip ptosis can be a congenital deformity (that you were born with) or an acquired deformity arising from previous rhinoplasty where the tip was destabilized unintentionally.

Tip ptosis is a particular finding that is easily appreciated when looking at the nose even from several feet away or across the room. You do not necessarily need to be a board certified facial plastic surgeon to see this! Figure 1 is an example of tip ptosis in one of my rhinoplasty patients here in San Diego. Just looking at her nose from the side one can appreciate how it appears to point downward at the tip as the red arrow demonstrates. Granted this patient also has other issues with her nose like a dorsal hump (bump) and over projection of the tip. But, now that you know what we are looking for, you can easily appreciate what even mild to moderate tip ptosis looks like. One of the most well-known celebrity examples of nasal tip ptosis is Paris Hilton. Just look at the position of her nasal tip in photos and you can see what I mean! 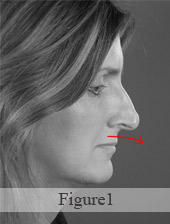 Some rhinoplasty patients come into the office requesting reshaping of their nose for a ‘hook deformity’ – described as such because of how similar the nose looks to an actual hook on side view. Figure 2 demonstrates this analogy visually. Comparing the silhouette of this type of nose with the shape of an actual hook, you can see why the term ‘hook nose’ came to be. What makes a hook a hook is that it curves back upwards much like the tip of this patient’s nose does as it joins to the upper lip. 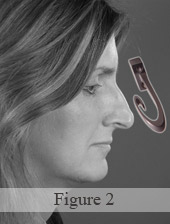 Many rhinoplasty patients present to our office noting their nose as being excessively long. In fact, sometimes rhinoplasty patients with tip ptosis come in simply requesting to have their nose shortened. They describe it in this manner because the nose actually appears to be too long for their face. Looking at this more objectively, we can measure the nasolabial angle to confirm these findings. Looking back to our tutorial on Nasal Analysis (see discussion in Nasal Analysis), the nasolabial angle is measured by crossing the lines made by the upper lip and the columella. 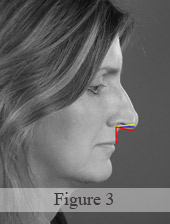 In Figure 3 you can see how the nasolabial angle (made by the two red lines) in this patient measures less than 90 degrees. This measurement is consistent with a ptotic (pronounced ‘taw-tic’), or drooping, nose. Normally this angle would be least 90 degrees (blue line) for a male rhinoplasty patient and more ideally 95-105 degrees (yellow) for a female rhinoplasty patient.

If the attachment of the lower laterals to the septum is loose, the tip will appear to hang down off of the nose like in our current example (See Figures 4B and 5).In addition, an excessively long nasal septum can contribute to the appearance of ptosis (See Figure 3C). When this occurs the attachment of the lower laterals is stable, however, it is being held ‘down’ by the septum causing the tip to look like it is hanging off the rest of the nose. 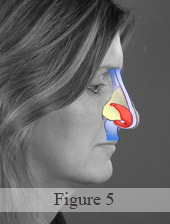 So how do we address ptosis of the nasal tip? In most rhinoplasty patients this requires repositioning of the lower laterals and possibly shortening of an elongated septum. Although this can be sometimes performed successfully with a closed rhinoplasty approach, I prefer to do this through an open rhinoplasty approach since this affords me greatest control of the cartilage shape and position.

Repositioning the lower lateral cartilage relies on an understanding of what is termed the ‘tripod theory’ in rhinoplasty. The tripod theory (Figure 6) draws a comparison between a photographer’s tripodand the two lower lateral cartilages of the nasal tip. In this analogy, the two lower laterals are assumed to be fused together in the middle. The lateral wings on each side (blue lines) and the fused central cartilage (red line) form the actual tripod. Each of the three legs is fixated (yellow circles) much like a real tripod would be stabilized flat on the ground. 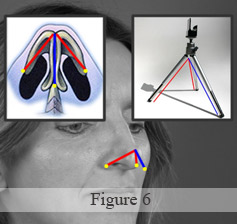 One reliable way to lift a ptotic tip is to shorten both lateral legs as diagrammed in Figure 7. By cutting this segment of cartilage on each side and overlapping the pieces(without changing the fixation points) you can see how this changes the shape of the tripod. Effectively this helps to pull or raise the tip to a new position. The alternative method involves completely mobilizing the tripod (both lower lateral cartilages) from the fixation points and rotating the entire tripod unit as one.In addition to both of these techniques, it is sometimes necessary to shorten the anterior, or front, edge of the septum. Regardless of what method is chosen, the goal is accomplished in terms of lifting a ptotic nasal tip to a more appropriate position.

Figures 8-11 are before and after photos demonstrating correction of a ptotic nasal tip using an open rhinoplasty approach.These photos represent stable changes nearly one year out from rhinoplasty surgery. Notice in Figure 10 the change in her nasolabial angle from being less than 90 degrees before surgery to between 100-105 degrees following surgery. Also note how her nose no longer points downwards and she by no means has anything that resembles a hook deformity any longer. Although I also corrected a dorsal hump deformity and deprojected her tip (bringing it closer to the face), correction of her ptosis was one of the main efforts of her surgery. 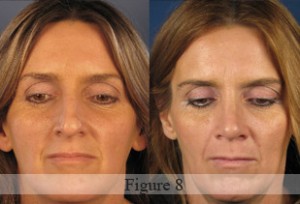 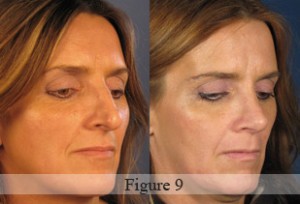 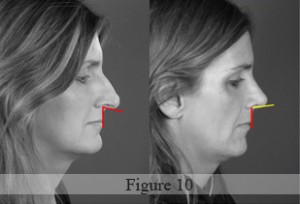