Nasal analysis in rhinoplasty is based on the premise there are ‘aesthetic standards’ used to determine how different a certain nose is compared to what facial plastic surgeons consider ideal. Complete nasal analysis takes into consideration not only the proportional balance of the individual subunits within the nose (for instance, tip and bridge), but also whether the nose is in harmony with the overall facial size and shape. These esthetic standards are reviewed below and help guide surgeons and patients alike when determining what areas of the nose should be altered and to what degree.

For many patients, these aesthetic ideals are the goal of having rhinoplasty performed. It must be pointed out, however, that beauty is a very subjective interpretation and cannot be simply reduced to measuring objective proportions and angles. For instance, many ethnic patients who are considering nose surgery will desire changes that are in many ways inconsistent with these aesthetic ideals. There are also many patients considering rhinoplasty that only desire reshaping of specific areas, while maintaining other features of their nose that a majority of people would otherwise want altered. This is precisely why it is nearly impossible to find agreement among a group of people who are assessing rhinoplasty outcomes. The ultimate goal of rhinoplasty is to make that particular individual happy with changes that are requested and made to their nose. Thus, the rhinoplasty surgeon should be ready and willing to deviate from aesthetic ideals if it means a non-surgical, natural appearance will be achieved. 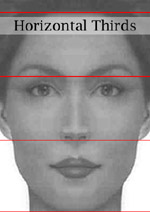 Analysis of the nose begins with overall assessment of facial and nasal proportions. One of the first assessments is analysis of what is termed the facial height. The overall height of the face should ideally be divided into equal thirds, referred to as horizontal thirds. The top one-third of the face is measured from the anterior hairline to the glabella. The glabella is usually the most prominent anterior projection along the lower forehead and approximates the level of the eyebrows. The middle one-third is between the glabella and the junction of the nose and upper lip, termed the subnasale. The lower one-third is between the subnasale and the chin prominence, termed the menton. Make note that the nose should ideally encompass nearly the entire middle one-third of the facial height. In patients who have a disproportionate balance of horizontal thirds, appropriate adjustments need to be made when determining how the nose surgery may favorably or unfavorably impact the overall shape of the face. 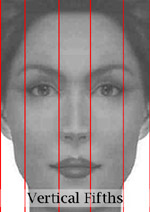 In terms of rhinoplasty analysis, the central fifth is useful in determining the width of the nose in the context of overall facial width. Ideally, the shadow created by light reflecting to the side of the nose should fall within the central fifth. Noses that are excessively wide will appear washed out and typically shadow beyond the central fifth. The outer margin of the nostrils should also fall within the central fifth. Nostrils that flare beyond this margin contribute to an excessively wide appearance and should be appropriately addressed during rhinoplasty. An exception to this rule is the ethnic nose (including Asian, African-American, and Middle Eastern noses), which, in some cases, can tolerate a slightly wider look than normal to maintain ethnic consistency.

Having learned the basics of analyzing facial height and width, it should now be quite obvious the size and shape of the nose (which essentially defines the middle one-third and central one-fifth) plays a critical role in one’s overall facial appearance. It is because of this relationship between the nose and face that rhinoplasty and revision rhinoplasty are considered among the most demanding plastic surgery procedures.

When considering potential candidates for rhinoplasty, assessment should also be made of key surface landmarks that contribute to the shape of the nose. In addition, certain nasal-facial (or naso-facial) relationships should be assessed that take into account various curves, angles, and shadows involving the nose and face. The following terms and diagrams are provided to help you better understand and visualize what changes may be appropriate for your nose.

Surface Landmarks of the Nose 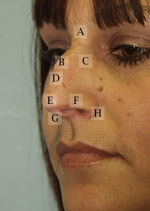 C. The nasal vault usually corresponds to the upper one-third of the nose. It is comprised on the paired nasal bones and often plays a significant role in how wide the nose appears.

E. The nasal tip, or lobule, is the soft rounded area of the nose above the nostrils. The nasal tip usually corresponds to the point of the nose furthest from the plane of the face. Because of it’s leading position, the nasal tip plays a key role in defining the overall shape of the nose. The transition zone between the nasal tip and the middle vault is referred to as the supratip.

G. The columella is the vertical soft tissue column in between the nostrils that helps provide support to the nasal tip. The columella also helps transition the nose into the upper lip.

H. The nasal base, or alar base, refers to the attachment of the nose to the face and upper lip. 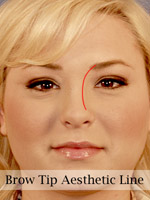 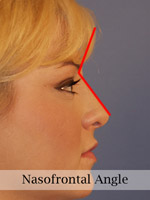 The Nasolabial Angle and Tip Rotation 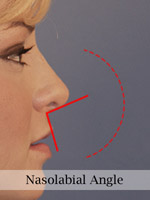 The nasolabial angle (see diagram) is assessed on profile view and reflects the angle between the upper lip and the columella. Although not entirely accurate, the nasolabial angle is often considered synonymous with nasal tip rotation. Rotation of the nose refers to nasal tip position relative to an imaginary arc (see dashed curve in diagram) on profile view of the face. A normal nasolabial angle in a male is 90-95 degrees, while normal in a female is 100-105 degrees. Patients with a hooked nose or drooping tip (termed ptosis of the nasal tip) have a nasolabial angle that is sharper than expected. These patients are classified as having an under-rotated tip. Patients with the opposite deformity (in layman’s terms, a ‘pig nose’ deformity) have a nasolabial angle that is greater than ideal. These patients are considered over-rotated and typically have a nose that appears excessively short for their face. 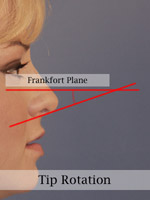 An alternative and more accurate method of assessing the nasal tip rotation is based on use of what is termed the Frankfort horizontal plane (see diagram). The Frankfort plane is a line drawn from the lower rim of the bony eye socket toward the ear canal. A second line is drawn in parallel with the columella. The angle created by the intersection of these two lines is considered a reliable measure of the nasal tip rotation. A range of 0-15 degrees in males and 15-30 degrees in females is considered ideal. 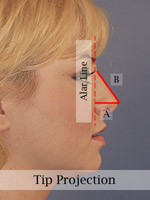 Nasal tip projection (see diagram) assesses how far out from the face the tip of the nose protrudes. There are several accepted methods of measuring nasal tip projection, but the most common one described is the Goode method. First the alar line is drawn, which is a line running perpendicular to the Frankfort plane. The alar line runs thru the alar-facial crease, which is where the nasal base attaches to the cheek (see dashed line). A measurement is then taken from the nasal tip to the alar line (“A” in the diagram) and compared to the distance from the nasal tip to the nasal starting point (“B” in the diagram). The ratio of “A” to “B” is a measure of tip projection and should ideally be 0.55-0.60 in most patients. When this ratio is higher than ideal (tip of the nose is positioned too far from the face), the nose is considered overprojected. When the opposite exists and the ratio is lower than ideal (tip of the nose too close to the face), the nose is considered underprojected. 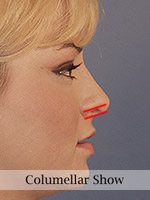 Columellar show (see diagram) is an assessment of how much of the inner nostril lining is visible when viewing the nose on a profile view. As is noted in the diagram of an actual post rhinoplasty patient of Dr. Hilinski, it is normal to see some nostril lining. In fact, the ideal amount of columellar show is 2-4 millimeters. In patients with insufficient columellar show, the nostrils appear “retracted” as seen on profile view (see photo example below left’). The opposite situation, termed excess columellar show, is present when greater than 4 mm of nostril lining is visible from the profile view (see photo example below right). This scenario could be the result of an alar rim that is retracted too high (excessively arched) and/or a columella that is too low (hanging columella). In either case, rhinoplasty should be planned to restore a more ideal configuration and shape.

The Tip and Nasal Base 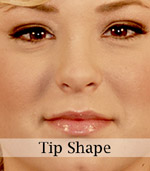 When viewing the nasal tip (or lobule) on frontal view (see diagram), the ideal shape is one that simply does not draw unwanted attention to the area. This typically translates into a tip that is slightly convex, or rounded, much like the top of a dome. The tip should transition smoothly and symmetrically on each side toward the alar rim. The tip should also smoothly transition superiorly (upward) into the supratip and dorsum. Inferiorly (downward), the nasal tip should blend into the columella as a soft curve in between the nostrils, which themselves should be slightly visible as shadows seen on the frontal view. 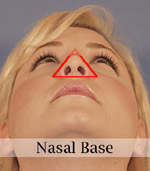 Analysis of the nasal base (see diagram) includes assessment of the alar rims, the columella and the undersurface of the tip. As was noted previously, the ideal width of the nasal base (measured from one outer nostril rim to the other side) should approximate the distance between both eyes. Noses that are excessively wide and demonstrate flaring of the nostril border usually require nasal base reduction that involves strategic removal of a wedge of tissue to narrow the base. The overall shape of the nasal base as viewed from below should fall within the general shape of an isosceles triangle. We term this a ‘soft triangle’ since the actual tip of the nose is more like a dome. This results in a nasal tip that appears well-defined yet maintains a slight convexity. When the alar rim and nostrils are excessively weak, they begin to bow inward, resulting in a tip that appears pinched and/or narrowed (see photo example below right). The opposite scenario, with alar rims that are excessively curved outward, contributes to a tip that is too wide and one that appears boxy or squared. This is often referred to as a ‘bulbous’ tip (see photo example below left). Rhinoplasty to recontour the tip or correct a deformity from prior surgery should aim to achieve this overall soft triangular shape.