The bulbous or rounded nasal tip is one of the more common reasons that patients seek rhinoplasty, or nasal reshaping, surgery. A bulbous nasal tip is one that simply looks more rounded – almost like a ball positioned on the end of the nose. Most rhinoplasty patients with a bulbous nasal tip describe their nose as being too wide or too big. Others describe the nose as being poorly defined without shape. To gain a thorough understanding of what the ideal nasal tip shape should be, refer to our rhinoplasty tutorial section on nasal analysis. In short, the nasal tip should simply not draw attention to it. It should be proportional in terms of size and width such that the bridge gently blends or transitions into the nasal tip. Overall, the nasal tip should be triangular shaped as seen from below, but without any sharp angles. We call this a soft triangle, which means it gently slopes in a convex orientation from the midline out to the sides. 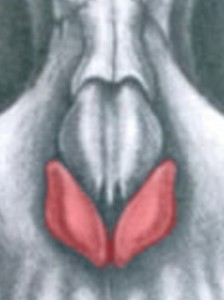 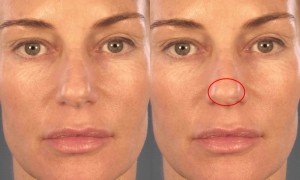 So what does a bulbous, rounded nasal tip look like in the typical rhinoplasty patient? The attached patient photo is a great example of a bulbous, rounded nasal tip. If you look at this patient’s frontal view, one of the first things you notice about her nose is the nasal tip region. It looks excessively large for her nose and is more rounded in shape. Some people would say it simply does not have much definition. If you remember from our online rhinoplasty tutorial nasal analysis page, the nasal tip should be just slightly wider than the upper bridge. In the bulbous nose, the tip is much wider than the nasal bridge.

Rhinoplasty to correct a bulbous, rounded nasal tip is directed at reshaping the lower lateral cartilage to approximate more of a soft triangular appearance.

In some rhinoplasty cases this is accomplished readily with suture techniques. Permanent sutures can be placed through the dome region referenced above to narrow the lower lateral cartilage on each side. The pair of cartilages are then brought closer together at the same time. These are called dome-binding sutures and can be very effective at narrowing the tip and providing significant improvement in nasal tip definition.

The photo below is an example of the suture technique to reshape a bulbous, rounded nasal tip. In this male rhinoplasty patient from San Diego, I reduced the bulbosity of his tip with careful placement of permanent sutures within the lower lateral cartilage on both sides. In doing so, I was able to significantly reduce the prominent arch along the nasal tip and provide him a more refined nasal tip appearance. You can really appreciate this change on his oblique view, which truly highlights the amount of bulbosity in his nasal tip. 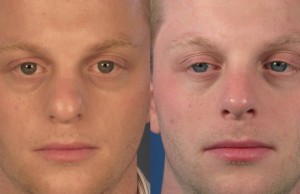 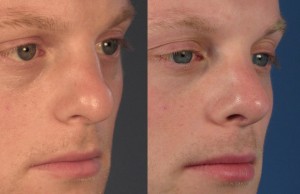 The photo below visually demonstrates an example of cephalic trimming to help address a bulbous nasal tip. This patient’s lower lateral cartilage was quite bulbous and necessitated some degree of reduction of the excess volume. Using an open rhinoplasty approach, I exposed her tip cartilage and performed a cephalic trim on both sides. A sufficient amount of cephalic cartilage was trimmed off to create a more defined, shapely nasal tip. At the same time, I was careful to preserve enough of her native cartilage structure to maintain adequate support of her nasal tip. Her after rhinoplasty photo was taken years later, further demonstrating how cephalic trimming, when done properly, can provide a nice cosmetic nasal enhancement without creating the dreaded pinched nasal tip. 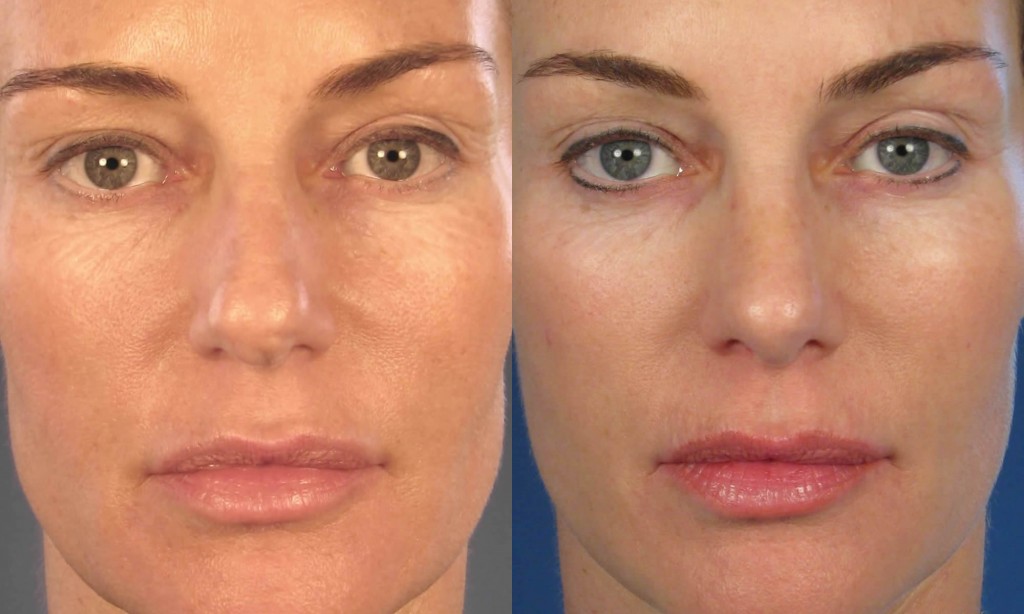 Cartilage Grafting of the Tip

Another alternative in management of the bulbous, rounded nasal tip involves cartilage grafting of the nose. Grafting means that the patient’s own cartilage (usually taken from the septum, ear or rib) is taken from one area and placed in another for added support or reshaping of the nose. In this particular case, we would use cartilage grafting to reshape the bulbous, rounded nasal tip. Some rhinoplasty surgeons refer to this technique as a “lateral crural underlay” maneuver. 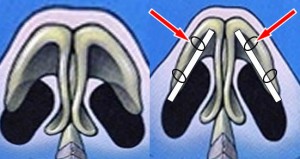 All this really means is that a segment of cartilage is placed under the lateral crus (another term for the lateral portion of the lower lateral cartilage) to reshape the nasal tip region. As is seen in the adjacent diagram, a linear, stiff cartilage graft (white rectangle) can be placed on the undersurface of the lateral crus and sutured to the patient’s own cartilage. By suturing the cartilage against the crural underlay graft, the rounded contour of the nasal tip now becomes straighter on each side. The end result is a more triangular shaped nasal tip that looks much more refined.

Below is an example of a lateral crural underlay technique for a bulbous, rounded nasal tip in this San Diego rhinoplasty patient. This particular patient had overly prominent lower lateral cartilages that was distracting in light of her remaining facial features. Her cartilage was also notably fairly stiff once evaluated in the operating room. I chose to perform a lateral crural underlay technique to reshape her nose. Cartilage was taken from her septum and the grafts created in an equivalent fashion. The grafts were sewn to the undersurface of her lower lateral cartilage on each side thus helping to draw the cartilage inward. The end result was a more refined appearance nasal tip that no longer looks rounded. Overall, she now has a more feminine looking nose with better definition. 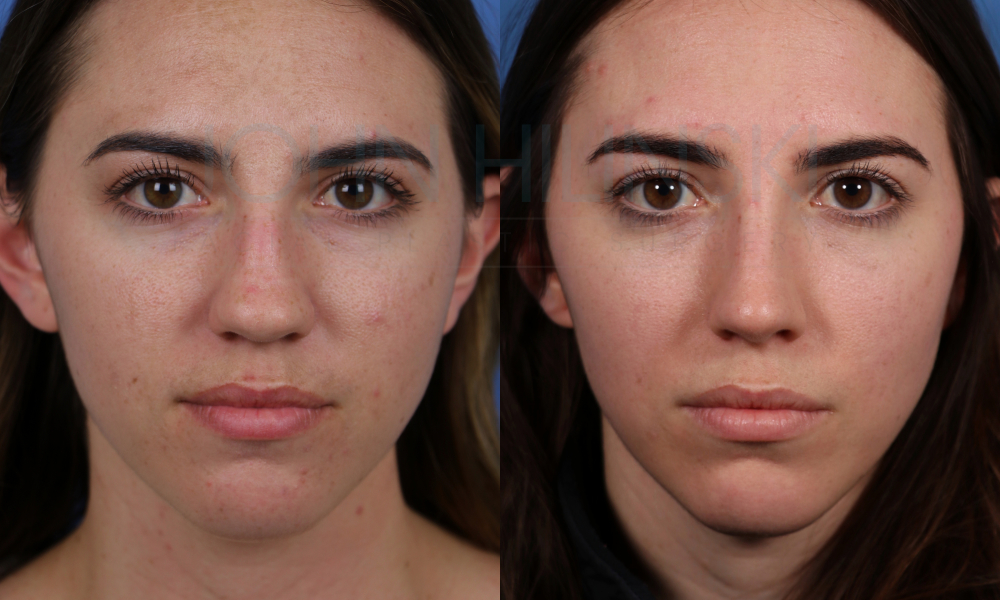 Below is another example of bulbous nasal tip reshaping in this female patient from San Diego, CA. Notice how prior to surgery her nasal tip appears rounded and broad for her face. Following cosmetic nose job surgery, her nasal tip now appears much less bulbous with more definition. Looking closely, you will appreciate that the tip is not overly done – avoiding any signs of looking surgically pinched or collapsed. 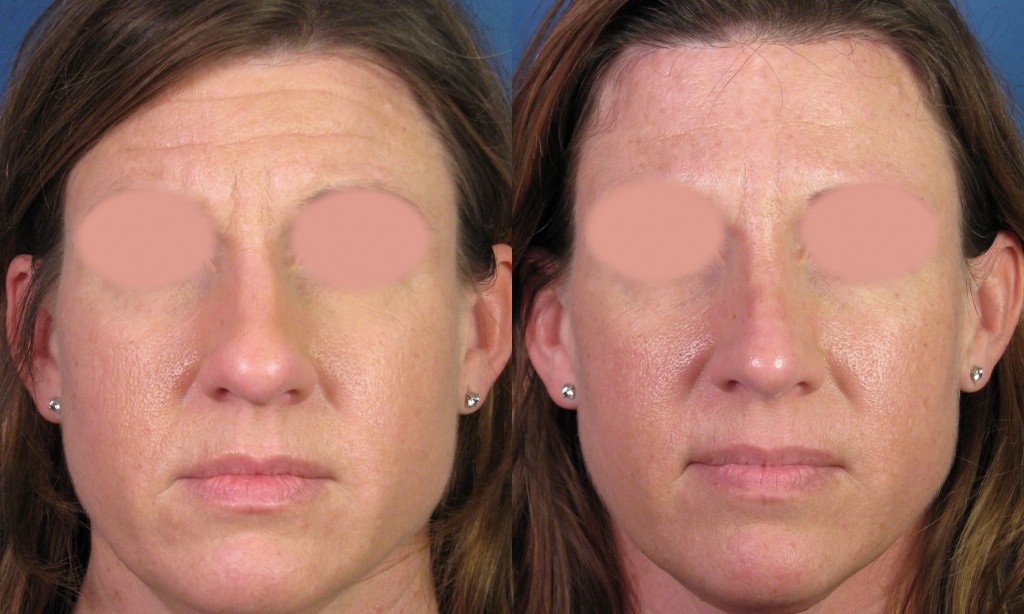 In some rhinoplasty patients, we use a combination of these techniques in order to accomplish our desired cosmetic goal. For instance, we might combine the suture technique with cephalic trim of the lower lateral cartilage. And in other rhinoplasty patients we might place a lateral crural underlay graft after performing a cephalic trim maneuver. The most important consideration is choose a rhinoplasty specialist who has the knowledge and experience to use one or a combination of these techniques when reshaping the bulbous, rounded nasal tip.