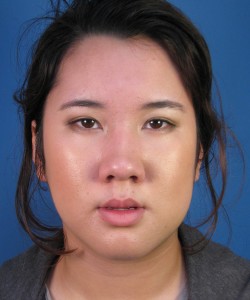 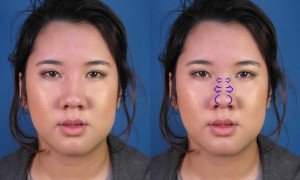 This patient presented to my office with a chief complaint of having a poorly defined Asian nose. On her examination, one can appreciate that her nose has some of the more classic features of the Asian rhinoplasty patient. This includes a somewhat wide nasal bridge as shown in the adjacent photo diagram (click on the image to enlarge). The blue arrows indicate where the upper and middle portions of the bridge appear poorly defined and washed out. On this frontal view you can also appreciate how her nasal tip is rounded – consistent with many Asian rhinoplasty patients who present for cosmetic nose reshaping. 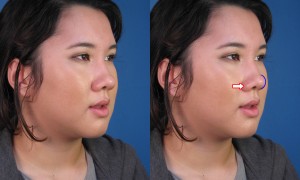 On her oblique view (click on the image to enlarge), you can see more signs of the nasal tip being too rounded for her desires (indicated by the blue curved outline of her bulbous nasal tip). In addition, you can see how she demonstrates a relatively rounded alar base as shown by the red arrow. This is a classic finding in many ethnic rhinoplasty patients that contributes to the base of the nose looking excessively wide. In many cases, Asian rhinoplasty patients describe this area as looking too thick or being too prominent for their desires. This type of finding is entirely consistent with the average Asian nose having much thicker skin than, for instance, a Caucasian nose. 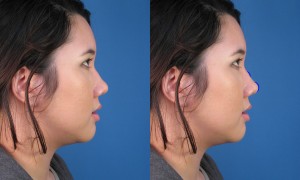 On the side view of this patient’s nose, you can see, again, how her nasal tip does not appear very well defined. In fact, it appears more rounded than anything. This is shown in the blue outline of her nasal tip as shown to the left (click image to enlarge). As noted in our Asian rhinoplasty general discussion, it is fairly common for Asian nose job patients to have more of a bulbous tip shape due to the thicker overlying soft tissue. In addition to the rounded nasal tip, this patient also had a slight hump along the bridge. This is also shown in blue in the adjacent diagram. This particular finding is somewhat unusual in the Asian rhinoplasty patient population where having a lower than average bridge height is more the norm.

Overall, this Asian rhinoplasty patient simply desired to have a more refined looking nose. In other words, she wanted her nose to look more defined. However, we both agreed that these changes would be made while all the while maintaining the natural appearance of an Asian nose. As we discussed, the goal in Asian cosmetic nose surgery is to create a nose that is more refined, yet still looks like an Asian nose. I have said this elsewhere, and I will say it again here – the goal in Asian rhinoplasty is not to create a Caucasian nose on an Asian face. Many people have referred to this type of surgery as ‘westernization rhinoplasty’ or ‘westernizing’ the Asian nose. But, again, the aim is not to create a western appearing nose on an Asian rhinoplasty patient’s face. After all, this would look pretty unnatural.

In this particular case example. I recommended the we try and create a straighter bridge profile mainly to address the dorsal hump deformity. This was accomplished by sanding the bump down in a conservative manner. At the same time, I recommended that we create a more narrow nasal bridge. In this instance I performed bilateral osteotomies – in other words, I broke the bones – to narrow the bridge. This was done in an attempt to create better shadowing along the sides of the nose, thus creating more definition as seen from the frontal view. In addition, I recommended we reshape her nasal tip to give it a more refined look. In her case, this also involved making her nose longer – also described as lengthening the nasal tip. In this process, we would also reshape the nasal tip cartilage to make it appear more narrowed and defined. During surgery, I ended up using suture technique to make her tip cartilage extended out slightly further. In addition, I used portions of her septal cartilage (the middle wall inside of the nose) and recycled them as grafts. In other words, I took cartilage from inside of her nose and used it to add shape to the nasal tip. Furthermore, I did end up thinning her nasal tip skin in a conservative manner. This was done to account for the fact her overlying skin was relatively thick. Had I not done this, it would have been even more difficult for her skin to mold to the new underlying cartilage framework. Although thinning the nasal skin can be fraught with complications if done in an aggressive manner, careful thinning of the nasal tip skin can be performed without much risk. Ultimately, this one maneuver was necessary in order to create more refinement while maintaining a natural looking tip. Finally, I narrowed her nasal base using a wedge resection technique to remove some of excess bulk where the nose junctions with the upper lip-cheek region. This was done to make the nasal base appear more narrowed with an overall less rounded appearance.

Asian Rhinoplasty Before & After Photos

The following Asian rhinoplasty results represent this patient’s nose nearly two years after surgery. Although you will hear many surgeons say it takes one year for the nose to heal, this is not always the case. For instance, in this particular case example, her nose continued to evolve upwards of two years after Asian rhinoplasty surgery. This was largely due to the thick overlying skin requiring more time to mold and reshape. In addition, she required a series of nasal steroid injections under the skin to help guide the healing process. In the end, you can see that she still has an Asian looking nose – but one that is more refined and defined. 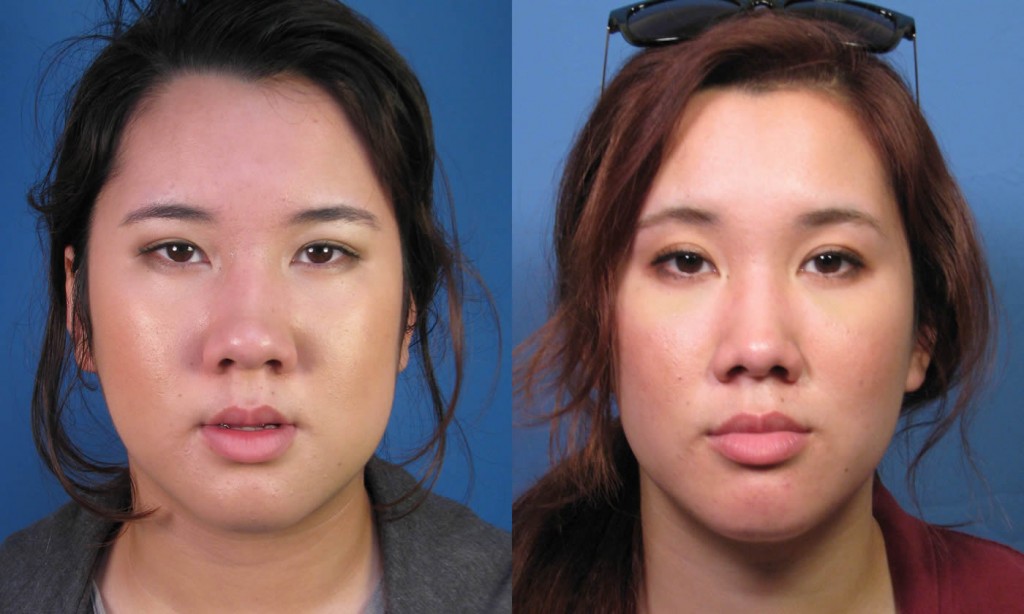 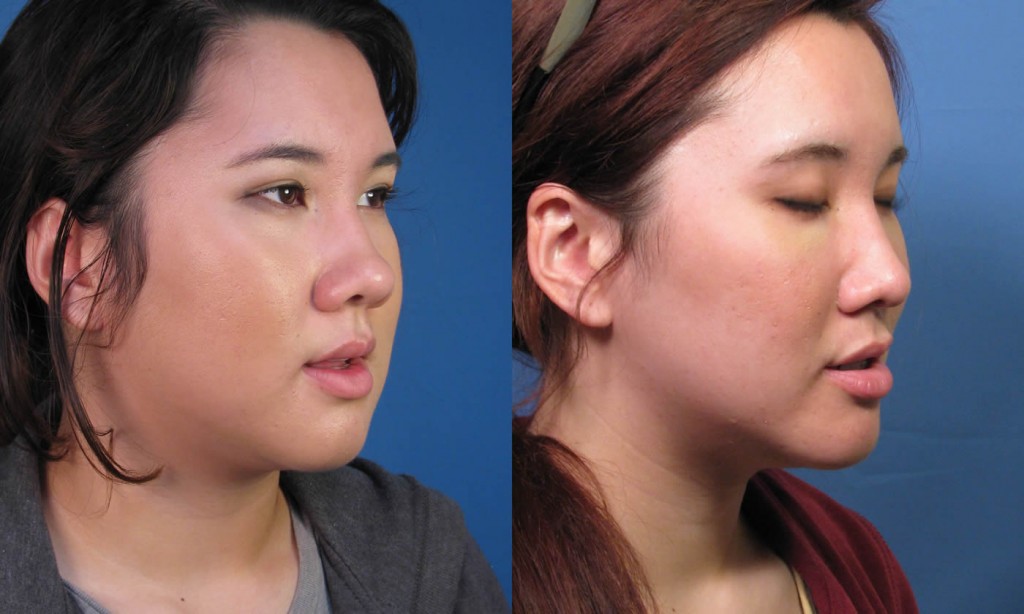 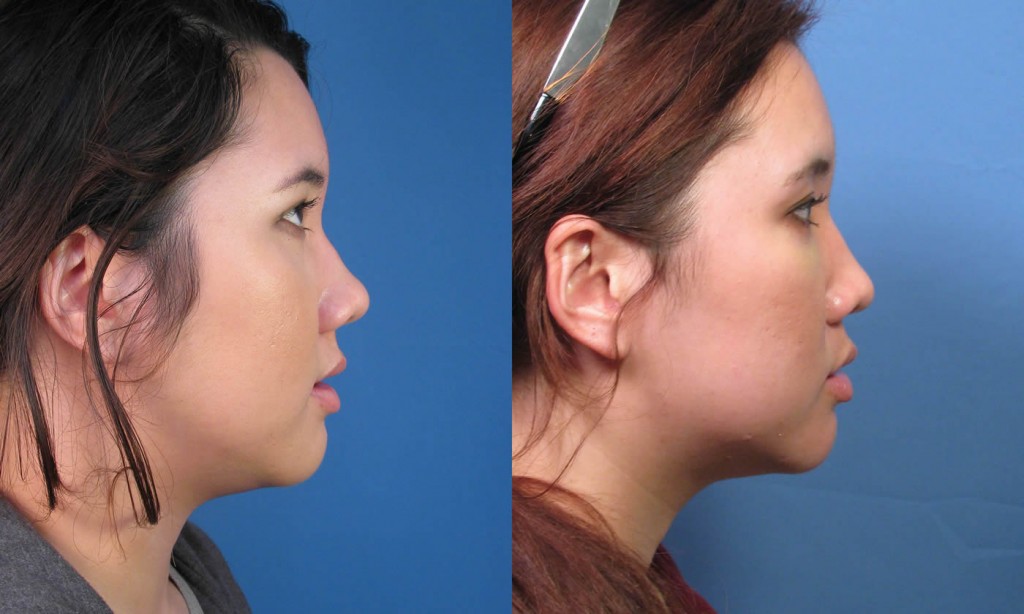 If you are an Asian patient considering cosmetic nose reshaping, feel free to contact one of San Diego’s most experienced experts in Asian rhinoplasty surgery – Dr. John Hilinski.