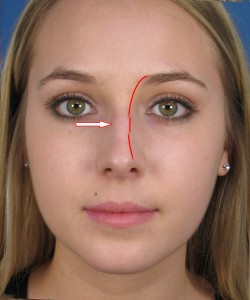 This is one of my favorite rhinoplasty patient examples because it truly reflects the essence of performing cosmetic nose surgery. This is a female patient from outside of San Diego who consulted with me to address some issues about her nose that were bothering her. As I discussed with her during our initial rhinoplasty consultation, she happens to have a very attractive face – largely due to beautiful, overall facial symmetry that is not commonly seen in the general population. What was bothering her primarily was the fact that her nasal bridge was somewhat irregular in contour. More specifically, she had a bump on the bridge that included irregular ‘bony horns’ (as they are often referred to) that stuck out on each side. This is diagrammed in the adjacent photo where the bony horn on her right is highlighted by the white arrow. What this translates into is a disrupted, or broken, brow tip esthetic line (as shown in the diagram) when looking at her nose from the frontal view. As we discussed in the Nasal Analysis chapter, the brow tip esthetic line is a key finding that is often associated with a more ideal bridge contour. When it is disrupted, as in this particular case, unwanted attention can be drawn toward this area detracting from an otherwise esthetically pleasing nose and face. 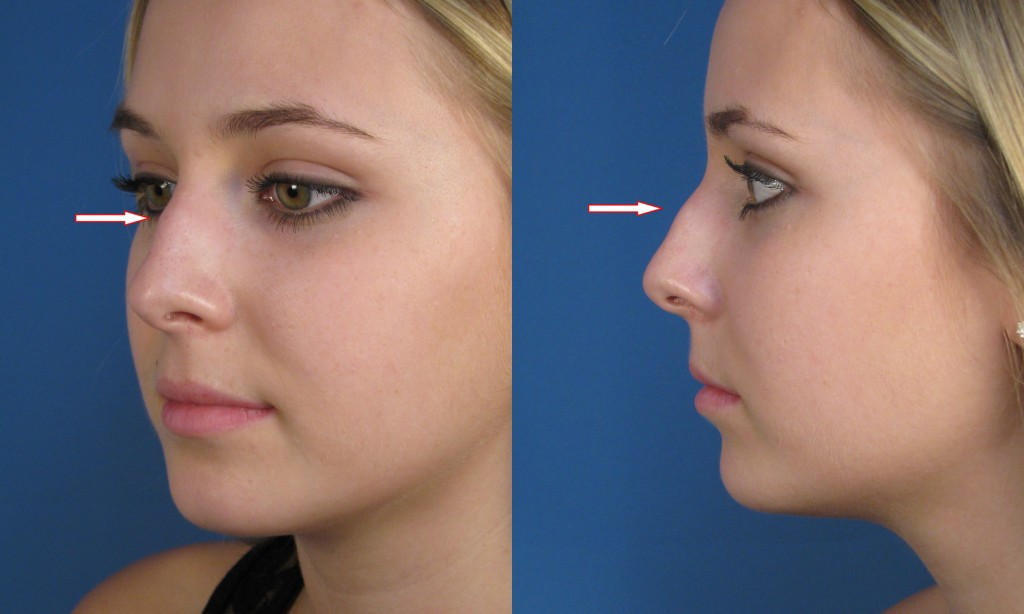 On her oblique and profile views, you can see much of the same in terms of her nasal bridge. The white arrows indicate the same bump along the nasal bridge that was seen on her frontal view. From both the oblique and the profile view you can appreciate how this feature could be interpreted as a distraction to her facial appearance.

But looking at the rest of her nose, there is really not much more to focus on in terms of potential changes through cosmetic rhinoplasty surgery.

In fact, during her rhinoplasty consultation we performed computer enhanced digital imaging of her preoperative photos. The frontal imaging is shown here in the adjacent photo diagram. 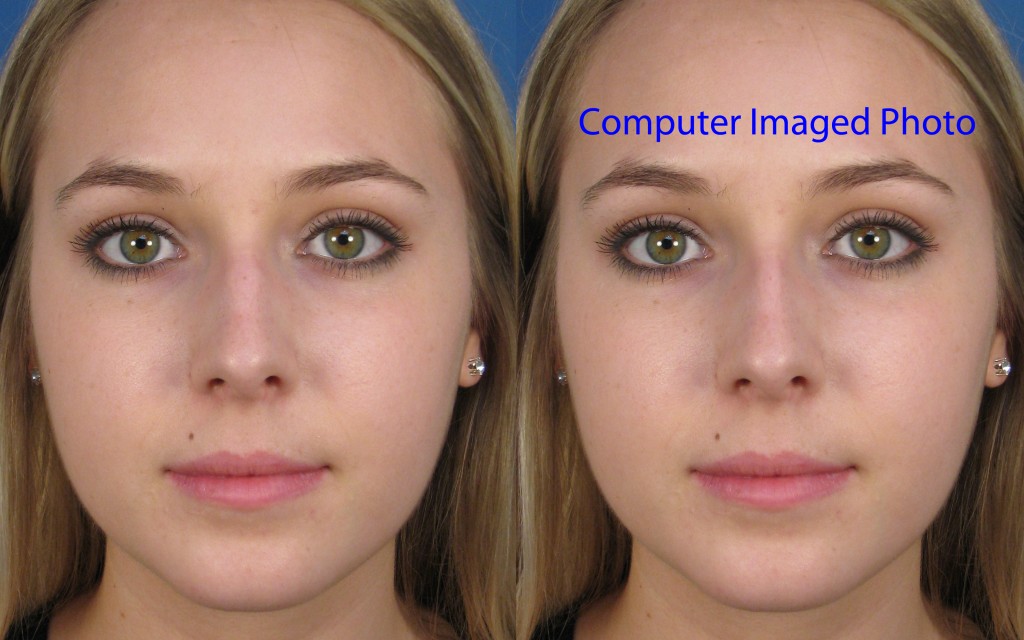 On the left side is her original frontal photo before any surgery. On the right is the digitally enhanced version of the same photo showing what might be possible from rhinoplasty surgery. As you can see, the computer imaged photo focused primarily on providing her a smoother looking nasal bridge without disruption of her brow tip esthetic line. Beyond this, not much more was recommended in terms of cosmetic nose reshaping. With the nasal bridge made smoother by removal of the bump and bony horns, her nose hardly needed any more work.

With that plan in mind, she decided to proceed with the recommended rhinoplasty surgery. We ultimately agreed to perform a closed cosmetic rhinoplasty procedure that would allow me to focus on reshaping her nasal bridge. This was a great option for her because she did not need any real tip reshaping performed. 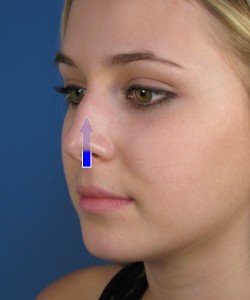 The closed rhinoplasty procedure was done as usual through the nostrils without having to make an external cuts in her skin. The approach is shown diagrammatically in the adjacent photo showing how we approached her nasal bridge by going into the nostril opening to access the dorsum of the nose.

One thing that might be surprising to some patients who have researched this topic online is that I did not perform any osteotomies on this nose. Meaning – I did not break her bones. Instead, I relied on very careful sanding technique (referred to as rasping the nasal bridge) to reshape the nose. Because I was able to avoid breaking her bones, she had a quicker recovery without any significant bruising noted after surgery.

The end result of her rhinoplasty surgery is shown below in the before and after photos.

Frontal Before & After Finesse Closed Rhinoplasty

As you can see in her frontal photos, there is a definite change in the appearance of her nose, but not so much so that she looks entirely different. What you will notice is that her nasal bridge now looks much smoother without any significant disruption of the brow tip esthetic lines on each side. The bony horns have been removed and her nose simply looks more refined. If you compare the imaged photo above to her after photo below, you will see that we are very close to achieving the type of change that was envisioned during her consultation. 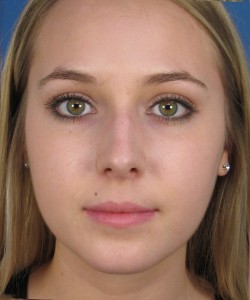 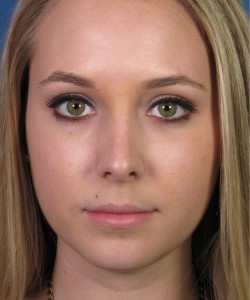 Oblique Before & After Finesse Closed Rhinoplasty

Her oblique before and after photos show a much more refined looking bridge that is straighter and smoother. Notice in particular how the bump along the dorsum has been removed. 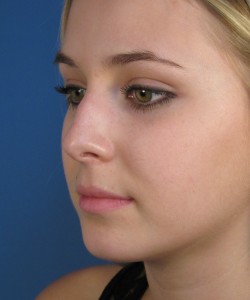 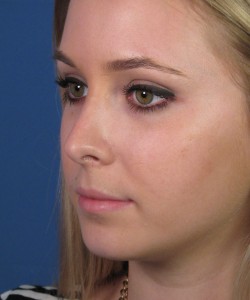 Lateral Before & After Finesse Closed Rhinoplasty

Her lateral before and after photos show how the bump has been removed and the bridge has been made straighter. Now, again, some people would question whether or not she should have had the bridge taken down even more. However, the aim of this rhinoplasty procedure was to address the features of her nose (like the bump) that she disliked while leaving the remainder of her nose alone to preserve a much more natural look. 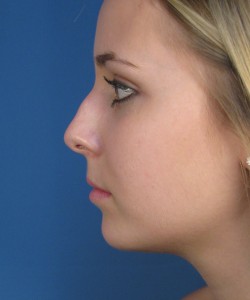 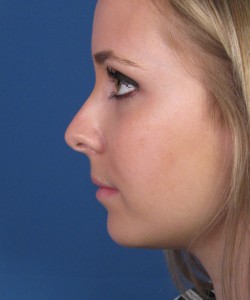 If you are seeking finesse type results from rhinoplasty surgery, contact our San Diego office today to learn more about what cosmetic nose surgery can do for you.