Restore Your Dorsal Hump or Bump

Over this past decade, our San Diego office has seen an increasing number of rhinoplasty patients seeking revision surgery with Dr. Hilinski to restore a dorsal hump, or bump, on their nose. Yes, you heard that correctly – putting a bump back on the bridge of the nose. You are thinking – why? Why would anyone want to have rhinoplasty surgery to create a hump on their nose? Most rhinoplasty patients are looking to have a bump or hump removed. And that is certainly the case. But the reality is there are patients out there who have undergone prior rhinoplasty surgery where their hump was removed – who go on to suffer serious regrets about ever having the bump taken down.

Psychology of ‘Missing The Nose Bump’

The psychology behind patients wanting to have their hump put back on their nose can be quite deep. Often times, it is multi-factorial – meaning, there are a number of different reasons behind their dissatisfaction with their new nose.

In many instances, these patients are left with an identity crisis following rhinoplasty – they simply don’t identify with their new look. For so many years they lived with a nose that had a bump or a hump. This is also referred to as a dorsal convexity by many rhinoplasty surgeons. Following rhinoplasty surgery to reshape the nose, the bump is often times reduced or removed to try and create a straighter looking profile. In most cases, the nasal tip is also reshaped at the same time.

Once the smoke clears from the early swelling and initial recovery process, some of these patients begin to miss their old nose. And more specifically, it is the nasal hump they begin missing in particular. Commonly, these patients note that their nasal hump gave their face character. Or that their entire family has a nasal hump and now they are considered an outcast since their bump is gone. One patient who consulted with Dr. Hilinski years ago openly stated that he felt uncomfortable at family gatherings when he realized he was the only one there without a dorsal hump on his nose.

Why Remove the Bump to Begin With?

You might be asking a logical question at this point – why did these patients have their nasal bump taken down in the first place? Well, in some cases, these patients thought they were unhappy with appearance of their nose partly because of the bump on the bridge. At the time, it sounded like a reasonable thing to do – have the nasal bridge height taken down to create a different profile. After all, this is done quite commonly in the world of rhinoplasty. Only after this was done and the healing process unfolded did they begin to realize this was a mistake. This is not the only situation when a plastic surgery patient has ‘buyer’s remorse’ following a procedure. There are, for example, a number of breast implant patients who regret having augmentation and elect to get them removed. In a similar manner, these rhinoplasty patients just never ‘got used to’ their new nose without the bump. As time goes on and they realize they will simply not ever adjust psychologically, the focus then becomes putting the bump back on the nose.

In other cases, rhinoplasty patients will tell you that they don’t regret having the bump removed. They are more unhappy with the fact the bump was taken down too much. This is referred to as over-correction or overly aggressive reductive rhinoplasty. In looking back on their decision to undergo rhinoplasty in the first place, they wanted their bump taken down – but only partly. In these instances, rhinoplasty patients will say they just wanted the nasal bump to be less obvious. Unfortunately, either this was not made patently clear to their rhinoplasty surgeon and the bump was removed completely. Or it was agreed upon that some of the bump would be left behind. But, regretfully, their rhinoplasty surgeon just took too much off of the nasal bridge. Either way, the bump was taken down too much – leaving them yearning to have it put back on the nasal bridge.

So how did Dr. Hilinski become known as one of the few rhinoplasty surgeons in the United States that was willing to help these individuals who wanted to have nasal hump put back on their nose? It started around 2010 with an online female patient who went by the fictitious name of ‘Helen’ in one of the early online plastic surgery chat sites. Helen had undergone a prior cosmetic rhinoplasty by a surgeon in the Philadelphia area. During the surgery, her nasal hump was removed. Subsequently, she just didn’t like the appearance of her nose. For years she struggled with this problem – not being able to pinpoint the exact problem that made her so unhappy with her rhinoplasty outcome. She ended up undergoing more rhinoplasty surgery by other plastic surgeons in pursuit of making her happy. Unfortunately, she was left disappointed even after these revision procedures.

Finally, she realized that a huge component of her unhappiness was related to the fact her bump had been removed. In looking around at her relatives, they all had the family nose she once had prior to rhinoplasty surgery. A light went off in her head. That convex, high bridge contour she once had was a huge part of her identity and character. After many years of struggling to find the source of her frustration with her nose, she honed in on the fact she missed her nasal hump.

Helen went on a national search to try and find the right revision rhinoplasty expert to help her out by putting a bump back on her bridge. Not surprisingly, many great rhinoplasty experts declined to operate on her. She then discovered Dr. Hilinski who was willing to listen to her whole story with a more open mind. After several discussions with Helen, Dr. Hilinski agreed to examine her nose. Upon initial inspection, her nose looked quite nice in terms of the bridge contour and tip shape. In fact, it was the type of rhinoplasty result that most patients would be quite content with after surgery. But this was the problem – she didn’t want a nose like everyone else. She wanted her old nose that had a dorsal bump. After further detailed discussion, Dr. Hilinski agreed to try and put a bump back on her nose in an attempt to restore some of her past identity. It was made very clear that her original nose would never be restored. The realistic goal was to get some of her old features back by re-creating a dorsal hump on her bridge.

Helen flew to San Diego and underwent the revision rhinoplasty performed expertly by Dr. Hilinski. During the surgery, Dr. Hilinski utilized cartilage grafting technique to augment her nasal bridge height. In the process, the cartilage was shaped so that it restored more of a convex profile view. Using photos of Helen prior to any rhinoplasty surgery, Dr. Hilinski was able to accurately gauge how much to add to her nasal bridge. Although it is impossible to restore the bridge to its exact prior state, it is possible to recreate a new bridge height that mimics the old convex shape. Fast forward several months into the healing process – and Helen was quite happy with the final results of her revision reconstructive rhinoplasty performed by Dr. Hilinski. As the years went on, the office heard less and less from Helen – which is quite normal for rhinoplasty patients. Years later, though, Dr. Hilinski received a very thoughtful and unexpected email from Helen. The just of her message was that she had not thought about her nose for a very long time – simply because she was so happy her identity had been essentially restored and she was able to move on with life. In a brief moment of reflection, she remembered her nose journey ending with Dr. Hilinski and wanted to let him know she was doing just fine with her new old hump!

Pre-Requisite of Prior Rhinoplasty

One very important consideration here is the fact that all of these patients once had a dorsal hump or bump. Would Dr. Hilinski consider putting a hump on someone who never had a bump? Absolutely not. These patients being discussed here all have one thing in common – they used to have a bump on their nose, which was taken off during a rhinoplasty procedure. To a great degree, the type of revision rhinoplasty Dr. Hilinski is performing here is restorative or reconstructive.

Not a Saddle Nose Deformity

Example Restoration of a Dorsal Hump

Here are a few case examples highlighting how Dr. Hilinski has been able to replace a dorsal hump on a nose following prior resection during rhinoplasty.

This male patient here had prior rhinoplasty surgery performed by a different plastic surgeon. His nose originally had a bump on it, which was taken down. Unfortunately, the patient was not happy with the outcome of his first rhinoplasty and desired to have a second surgery to restore the hump on the bridge. Dr. Hilinski ended up using his own cartilage to rebuild the bridge. This included placement of cartilage along the bridge to help recreate the dorsal convexity – or hump. Many years later, the patient is doing well and is quite happy with how his nose turned out. 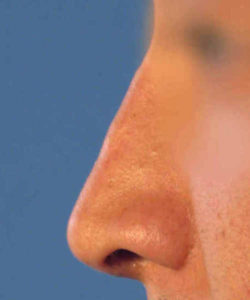 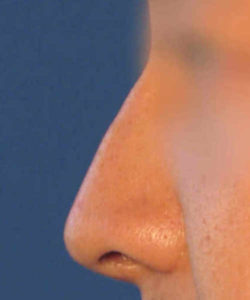 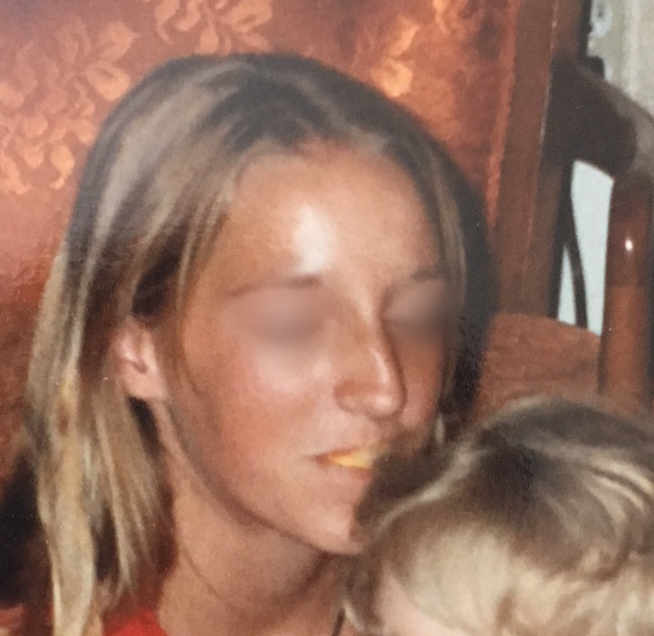 This female patient had prior rhinoplasty surgery by a different plastic surgeon who took off her nasal hump. You can see to the right what her nose looked like prior to having any plastic surgery. Indeed, she had a dorsal hump, or convexity, on her nose.

Unfortunately, her rhinoplasty surgeon was over-aggressive in reducing her nasal bridge – leaving her unhappy with her nose and wanting to restore the bump. Yearning to have some degree of a nasal hump put back on her nose, she sought out Dr. Hilinski to perform a revision rhinoplasty procedure on her. This was done with a closed approach using a diced-cartilage fascia (DCF) graft to raise her nasal bridge back up. A decision was made to try and restore a convex bridge – without making it too high. Within weeks of having her revision performed, she was already feeling much more comfortable with her new old look. 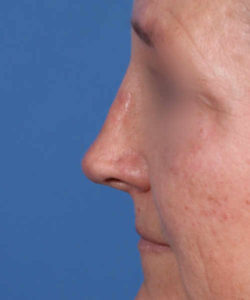