Bridge, Tip and Base Narrowing 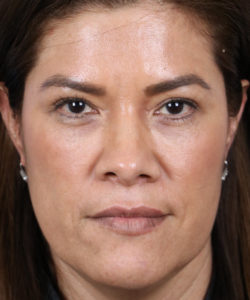 This is a great case example of how an ethnic, female nose can be narrowed throughout – meaning the nasal bridge, tip and base – while maintaining a natural appearance.

I saw this female patient for rhinoplasty consultation on several different occasions – mostly because we both wanted to be very open and in agreement with the intended goal in terms of cosmetic nose reshaping. One of the most important factors in her case – as in many ethnic rhinoplasty patients – was the skin thickness. She happened to fairly thick nasal skin. So why does this matter? Thicker nasal skin simply doesn’t want to become smaller. Meaning, if you reduce the size of the underlying framework (cartilage and bone) of the nose, thick nasal skin simply doesn’t ‘shrink down’ to the new, smaller size. Therefore, you have to be very careful when trying to make a nose like this appear more defined and refined. And even when you opt to use other rhinoplasty techniques – expectations need to be tempered so that patients realize way up front that their nose can be improved – but only to a certain degree.

In this particular rhinoplasty patient, she wanted to have a nose that just looked smaller on her face. That included wanting to (1) narrow the wider nasal bones, (2) defining the wide, broad nasal tip, and (3) narrowing the flared nostril base. I counseled her repeatedly that – although I was confident I could improve the appearance of her nose – her thick skin was a significant limitation in terms of just how much improvement I could make. She was quite accepting of this notion and understood why this was the case. Given the fact she was realistic in terms of her expectations, we both decided to proceed with a planned open septorhinoplasty surgery. 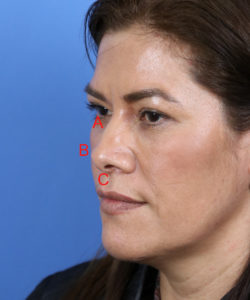 I ended up performing an open rhinoplasty with septal cartilage harvesting because this provided me with optimal exposure of her tip and bridge – which was needed in order to maximize the changes being made.

Although you can tell how wide her nose was overall on the frontal view provided above, her oblique (or 45 degree) view revealed other issues that contributed to her dissatisfaction with the nose. For example, her nasal bridge looked even wide on this view (A) because the middle one-third of her nose (termed the middle nasal vault) was a bit narrowed. In addition, this view confirmed the bulbous, wide nasal tip (B) that can be easily seen on her frontal view. And finally, the heavy columella (C) further contributed to her nose looking less than optimally defined.

Given the fact all of these areas would need surgical attention and reshaping – we decided to proceed with the open rhinoplasty approach.

Shown here are the results of her open rhinoplasty procedure. 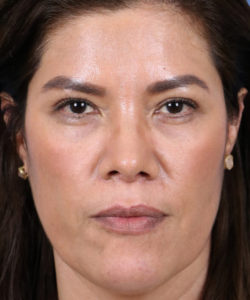 On her frontal view, you can readily see how the entire nose looks smaller and more defined. This includes the nasal bones that have now been brought closer together to shadow better from this view. This was accomplished by breaking the bones – also termed osteotomies – and moving them inward. In cases like this, the goal is to narrow the bones without making the nose look to skinny. It also includes a smaller looking and more refined nasal tip shape. Instead of the broad, boxy tip she once had – there is now a nicely defined, slightly convex shape to her nasal tip – without looking overly pinched or fake. 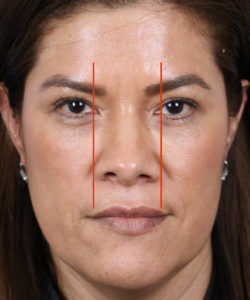 If you look closely at her nasal base, you will see the nostrils are now closer together (and more symmetrical). Looking back at her preoperative rhinoplasty photos, you can see just how wide the nostril base was prior to surgery. The red vertical lines correspond to the width of her nasal base. If you follow them up toward the eyes – you will see the distance between the two lines (corresponding to the width of her nostril base) is wider than ideal. In an ideal world, this distance should be equivalent to the width between the two corners of the eyes. In this case, she is a bit wide by nearly 3-4 millimeters on each side. The only way to help correct this is to perform a nasal base reduction – or nostril narrowing procedure as part of the rhinoplasty reshaping. In this rhinoplasty case example, this meant removing a wedge-shaped segment of skin and soft tissue where the nostrils met the cheek. This is often referred to as a Weir excision by rhinoplasty and revision rhinoplasty experts. 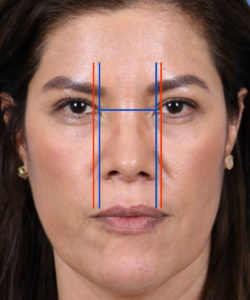 In the end, the nostril base was brought in by several millimeters on each side. As you can see here in the adjacent diagrammed photo, she is now much closer to an ideal width in terms of the base of the nose. The blue vertical lines correspond to her new nasal base width. If you look closely, you will appreciate how they now intersect very near to the corner of the eye on each side – certainly an improvement from where she was prior to the rhinoplasty. But the nasal base wedge reduction was not so aggressive that her nasal base appears to have been surgically altered – meaning this region still appears to have a gentle curvature as it rounds the nostril base and joins the cheek.

In terms of her other views, the oblique view shown early also demonstrates an overall nice improvement. In fact, you can see even on this angled rhinoplasty view that her nose looks more refined with less curves and undulations. If you look closely at the oblique view, you will notice how her nasal tip even looks more narrow and defined. 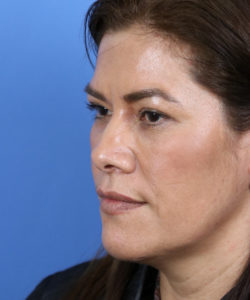 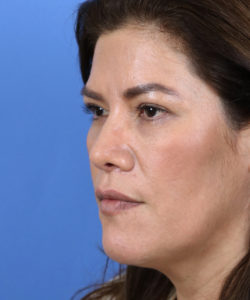 Although her lateral view did not change much – that was the intention – to try and maintain her overall look. I did lift her nasal tip up slightly – called increasing her nasal tip rotation. But this was done very carefully so as to avoid an unnatural rhinoplasty result. In the process of these changes. the columella was made to be less heavy and her bridge was reshaped in a finesse manner. 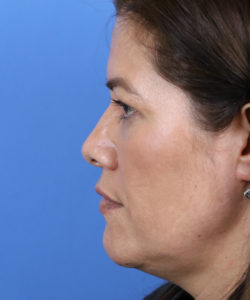 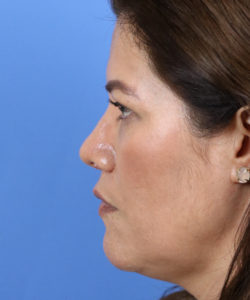