This is a great case example of revision rhinoplasty that highlights one of the problems with use of calvarial bone grafts in nose reshaping surgery. This particular patient had undergone a rhinoplasty procedure performed by a different plastic surgeon when she was quite young. She had originally developed a problem with her nose following a traumatic injury. She consulted with a plastic surgeon many years ago outside of California who performed a surgery on her that included use of a calvarial bone graft to reshape the nose.

A calvarial bone graft is a somewhat dated choice for reconstructive rhinoplasty surgery, which involves taking a segment of the outer skull to rebuild the nose. The reason this type of grafting has fallen out of favor in the world of rhinoplasty surgery is because the bony material will commonly calcify (harden in an unusual manner), warp (distort) and dissolve (disappear) after placement. Although other methods of grafting, such as septal and rib cartilage, have these same potentials, they do not occur as frequently as they do with calvarial bone grafting.

Following this patient’s original rhinoplasty procedure, the calvarial bone graft began to shift from its original position. She then underwent a follow-up revision rhinoplasty surgeon by another plastic surgeon who tried to adjust the orientation of the graft. Unfortunately, this secondary rhinoplasty procedure was unsuccessful. Because the two failed rhinoplasty procedures were performed by credible board certified plastic surgeons, the patient walked away feeling as if there was little hope with pursuing any additional surgery for her nose. As the years went on, her nose became increasingly distorted in terms of its shape. This was primarily due to calcification of the calvarial bone graft with significant displacement of the bone graft.

She lived with the problem for literally decades before she revisited the whole notion of further revision rhinoplasty surgery. After doing her research, she discovered our office here in San Diego and realized that facial plastic surgeons, like myself, have dedicated revision rhinoplasty expertise in helping patients just like her. She came in for a revision rhinoplasty consultation, which included a thorough evaluation of her nose and discussion of possible corrective measures that might be taken.

On her examination, it was quite obvious that her calvarial bone graft had slipped off to the side of her bridge. 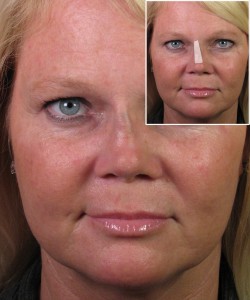 In fact, it had moved over so much that it was displaced toward her right eye. This can be seen in the adjacent photo diagrams. On the frontal view, you can see how the calvarial bone graft was pushed off of the midline, particularly along the upper portion of the graft (near the root of the nose). The inset photo outlines the portion that corresponds to the outline of the calvarial bone graft as seen from the frontal angle. Unfortunately, as time passed on, the overlying skin of the nose began to shrink wrap down around the calvarial bone graft so much so that you can now literally see the borders of the graft. You can easily tell from this frontal view that the calvarial bone graft was excessively thin near the top, thus creating a very unnatural looking nose. The dark hue that can seen coursing across the graft corresponds to a collection of veins that were very near the skin surface. Because the skin was thinned out so much, these veins were much more visible. 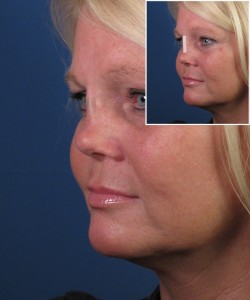 On her oblique (45 degree) view of the nose, you can also readily appreciate the abnormal contour that resulted from the calvarial bone graft. From this perspective, you can see how the graft was creating a bridge contour that was abnormally high for the nose. Consequently, the middle portion of her nasal bridge appeared scooped out. The inset photo outlines the portion that corresponds to the outline of the calvarial bone graft as seen from the oblique angle. As you can see, the bone graft was shifted away from us near the top border. You can also appreciate from this angle how one’s eyesight may be impaired as a result of the graft obstructing normal peripheral vision. 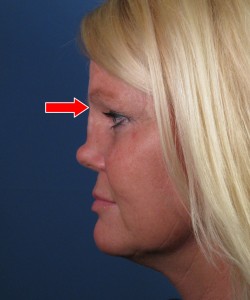 On side view (profile) of her nose, you get can another perspective of where the bone graft is positioned. As you can see from the diagrammed photo, the graft almost looks as if it had slipped upward as well (toward the forehead). You can also better appreciate how this displaced graft gave the appearance the middle portion of the bridge was scooped out. The red arrow indicates where the nose normally starts – also referred to as the nasofrontal angle. To remind yourself of this anatomical landmark, use this link here to refresh your memory on rhinoplasty analysis. In this particular case, the nasofrontal angle has essentially been obliterated as a direct result of the calvarial bone graft being displaced upward. On first glance of this nose, you quickly realize that there is something wrong with the overall shape – even if you are not an experienced rhinoplasty surgeon.

After reviewing the options available to her, this patient elected to undergo another very complex, challenging revision rhinoplasty surgery. I decided to perform the surgery with an open rhinoplasty approach so that I could have maximum exposure to the bridge area.

Once the revision rhinoplasty procedure began, it became quite clear that the bone graft was densely calcified up against the surrounding tissues. This means that the graft almost felt as if it was cemented into place after all of these years of healing. It was like the difference between carving your initials into a petrified tree trunk versus a normal tree trunk. Unfortunately, the graft could not be removed easily. Thus, I had to begin reshaping the graft with secondary techniques that involved extensive sanding. Ultimately, the calvarial bone graft was able to be reduced in terms of its size such that a more normal bridge contour could be achieved. At the same time, an attempt was made to improve the transition from the upper bridge to the mid dorsum. This required auricular (ear) cartilage grafting in addition to more reshaping of the calvarial bone graft. Once these changes were accomplished, a temporal fascia graft was then placed over the newly shaped cartilage and bone (including the residual portions of the calvarial bone graft). The fascia graft was placed in order to create a thicker overlying soft tissue layer and to help minimize chances of visible contour irregularities following surgery.

Herein are the before and after photos following my revision rhinoplasty procedure.

As you can see from the comparisons, her nose now looks much more normal overall. No longer does she have as much unwanted attention being drawn to this portion of her face. On the frontal view, we have restored a much more natural looking bridge contour and shape with significant improvement seen in terms of symmetry. The bridge width is also now much more appropriate for her face with better balance when compared to her overall facial structure. This is a patient who has a generally rounded facial shape, therefore, a thin nasal bridge looks inappropriately out of balance on her face. You can also see on this frontal view that her nasal skin is much healthier looking now that the fascia graft has been placed. Furthermore, the previously visible, discolored veins are now much less obvious. On the oblique view of her nose, you can see how the bridge height has been taken down quite a bit. The nasal bridge contour is also much more pleasing as it transitions from the new nasofrontal angle all the way down to her tip. On side view of the nose, you can also see how the nasofrontal angle has been reestablished to create a much more natural look. 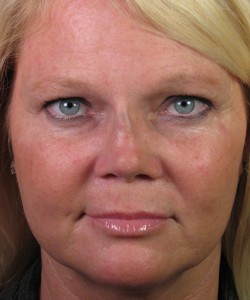 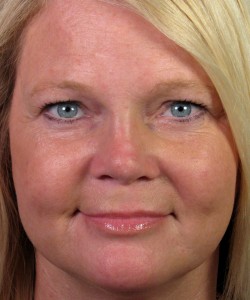 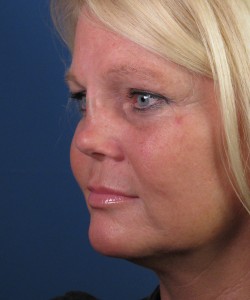 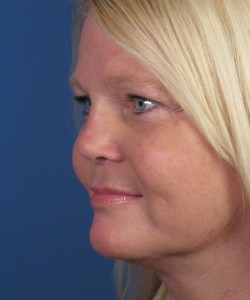 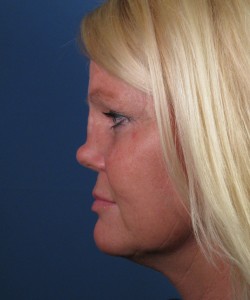 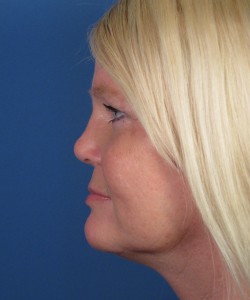 It should be noted that some people might look at these revision rhinoplasty results and criticize them for not showing even more change and refinement. But, anyone who knows anything about the true complexities of revision rhinoplasty will appreciate the overall changes that were made. The global transformation of this nose was incredibly difficult, and that is coming from a surgeon who has a highly specialized practice with dedicated experience in managing some of the most difficult rhinoplasty cases in the region. The reality is that not all noses that were previously operated on can be restored completely due to extensive scarring and tissue distortion. In many cases, just like this one, the expectations need to be tempered. The most important point is that this particular patient is ecstatic with her results and is no longer inhibited by the appearance of her nose.