Rhinoplasty and chin implant are often times recommended to be done together in order to help give someone even better overall facial harmony and balance. This is a great case example of this concept where a nose job was done at the same time as chin augmentation with an implant. 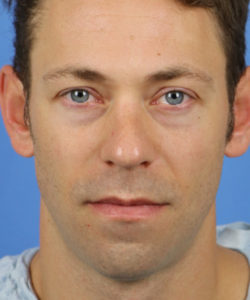 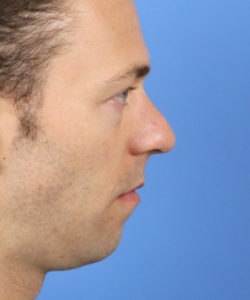 When looking at his preoperative frontal photo you can see how the tip of his nose was quite wide in comparison to the rest of his nose. This is what gave him the appearance of having a bulbous nasal tip.

On his side view, you can see that he had a small bump or prominence just above the tip – giving him the appearance of having a slight hump deformity. In addition, if you look very closely, you will see how his nasal tip was even a bit rounded on the side view.

The other issue that was noted on his side view was under projection of the chin. Some people refer to this as a ‘weak’ chin or ‘recessed’ chin. No matter how you label it, this patient’s chin was not as prominent as it should be – and would benefit from augmentation using a chin implant.

The patient consulted with Dr. Hilinski based on his qualifications as one of San Diego’s best cosmetic nose and chin implant surgeons.

The overall goal of doing a chin implant with a rhinoplasty procedure is to give the patient a more harmonious profile view. In essence, the goal is to create better facial balance in terms of the midface (nose) versus the lower face (chin). It is actually quite common to see patients undergoing these two procedures together. 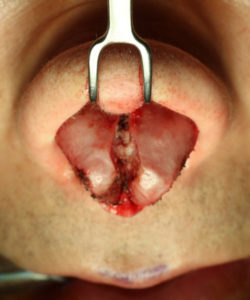 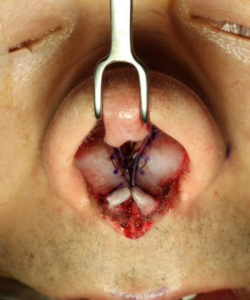 For the bulbous nasal tip issue, Dr. Hilinski ended up performing primarily a suture reshaping of the cartilages. Specifically, Dr. Hilinski targeted the lower lateral cartilages to make the tip go from being broad and wide to being more narrow and defined. You can see those changes here in the adjacent intraoperative photos that were taken during the actual rhinoplasty surgery. The photo on the left is how his nose appeared at the start of the operation. The photo on the right shows what it looked like after Dr. Hilinski reshaped his bulbous tip.

Just look at the overall position and shape of the cartilage before Dr. Hilinski placed the dome binding sutures. You will notice that the tip cartilages were reshaped and customized to be closer together (narrowing the tip) while also assuming a different shape (that helped to address the bulbosity of the nasal tip).

Using this particular tip rhinoplasty technique. there was minimal cutting of the cartilage to remove so-called excess. Therefore, there was little risk to the patient that his nose would end up being pinched and collapsed as a result of the rhinoplasty.

Here are the actual before and after photos showing results of Dr. Hilinski’s cosmetic rhinoplasty procedure and chin implant placement. One thing you will notice is just how natural this male patient still looks after plastic surgery. That is truly the goal of nearly all types of facial plastic surgery – to address specific cosmetic concerns while still maintaining an overall, natural looking result. He now has a stronger looking male nose and a profile that is more masculine appearing. 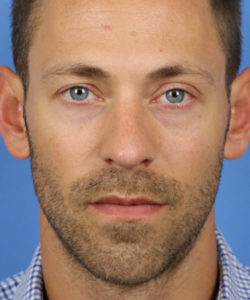 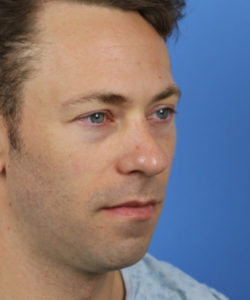 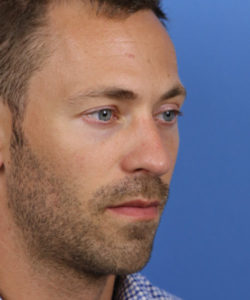 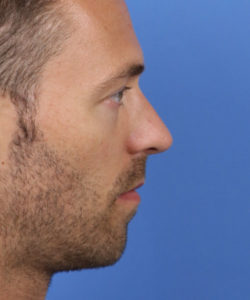