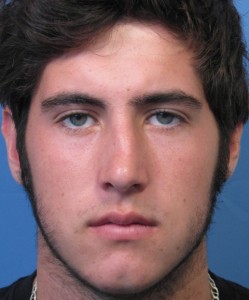 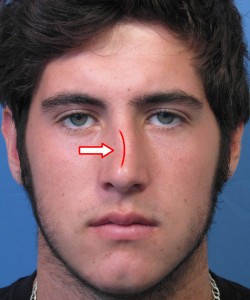 In this particular case example you can see that his nose is, indeed, quite crooked when seen directly from the front view. As is shown in the adjacent diagram, there is a curvature of the nose to his left side (our right when looking at the photo). This curvature creates the illusion that his nose is, indeed, shifted or displaced to his left side.

Coincident with this deformity is the fact the nose is depressed on the opposite side (his right side). This is a direct result of the nasal bridge being displaced off of the midline. 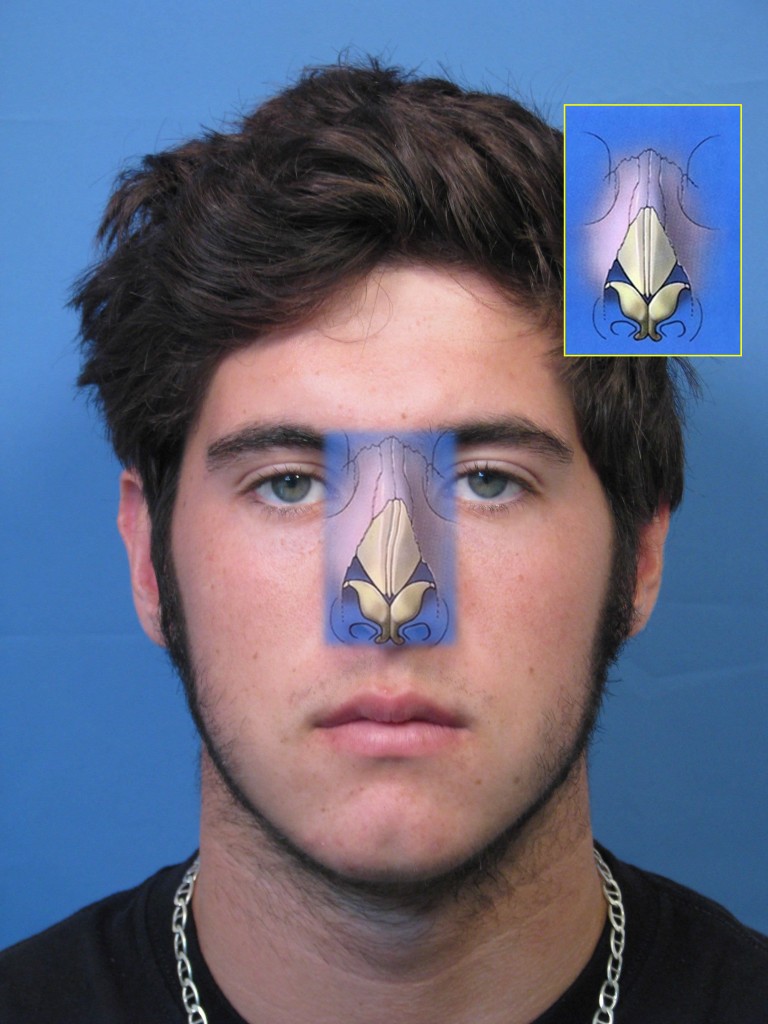 What happens in cases like this is the normal anatomy that comprises the right side of his bridge gets pushed over to the opposite side as a result of the injury. This is visually demonstrated in the adjacent photo diagram that also tries to show the underlying anatomical details of the nose. The yellow framed inset shows you what the normal alignment should look like. As you can see, the upper one-third of the nose is comprised of bone (white shaded segments in the photo). When the nose is broken or fractured during an injury, the bone can become displaced, or moved, to one side. In this case, the patient’s nose was struck from his right side – causing the bone to break and move to his left side. When seen from the front view, you can easily tell how the bones now almost appear twisted. 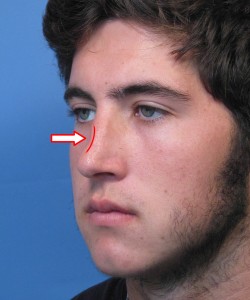 You can also see in this anatomical depiction why the opposite side (his right side) becomes depressed inward contributing to an abnormal shadow in his photos. This is shown more visually in the photo to the right as indicated by the white arrow showing where the bridge has been depressed inward.

Repair of a Crooked Nose

Contrary to popular belief among many patients and even plastic surgeons, most crooked noses can be effectively repaired by surgical reconstruction to help restore a more normal alignment. I say this because many of my past reconstructive rhinoplasty patients were told at some point that a crooked or twisted nose cannot be surgically repaired because it will just drift back into the abnormal alignment. The reality is that a good number of fractured, crooked noses can be restored to a relatively normal alignment and shape.

Now do not get me wrong – fixing a crooked or twisted nose deformity is not easy. But with excellent surgical technique and experience in reconstructive rhinoplasty, patients can be left quite happy following this type of surgery. In this particular case, I used what is called a closed rhinoplasty approach to complete the surgery. A closed rhinoplasty is a term used to describe the general approach in terms of where incisions are made in and/or around the nose. Closed refers to the fact there are no incisions made on the outside of the nose – the incisions are all made inside of the nose. In this manner, there are no scars made on the external surface of the nose that might become visible. 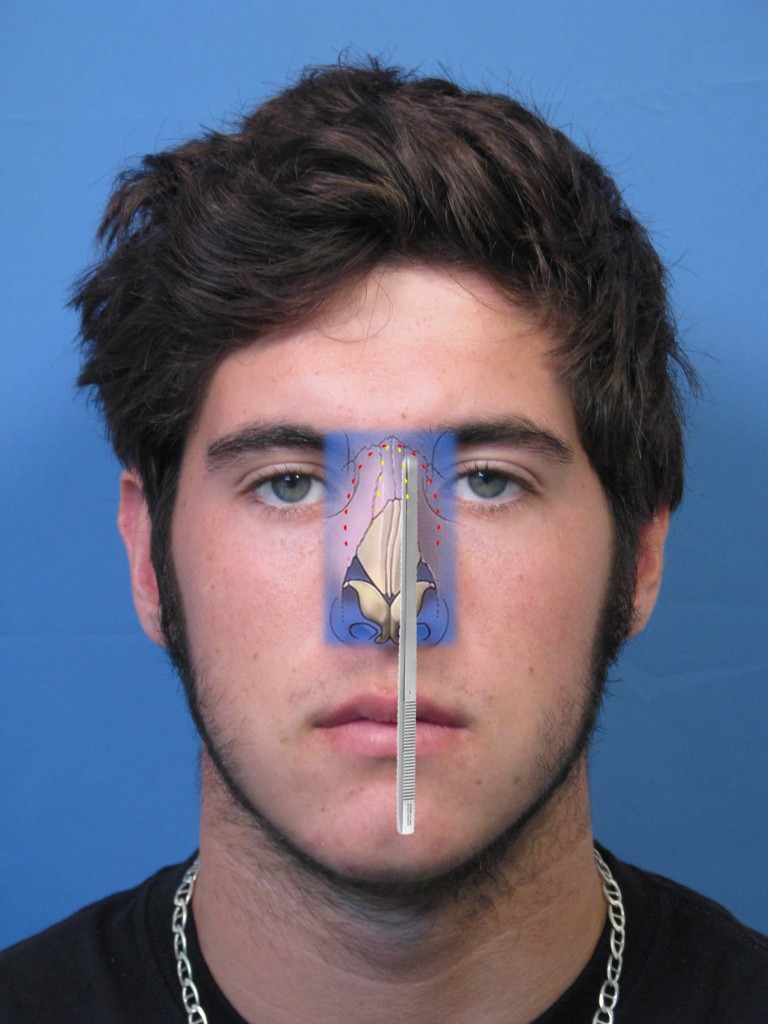 Using the closed rhinoplasty approach, a surgical instrument, called an osteotome, was employed to help me reshape the nasal bones. A nasal osteotome is a specially designed surgical tool that is used to cut the bone. In this particular rhinoplasty patient, the nasal bone needed to be cut before it could be repositioned. The osteotome has a very sharp edge at the tip that allows me to cut the bone incrementally along the top of the bridge (called a medial osteotomy – yellow dotted line) and along the side of the nose (called a lateral osteotomy – red dotted line). You can see how the osteotome is used in the adjacent photo. As is depicted, the osteotome is passed through the nostril but under the skin of  the nasal bridge. It is then used to perform the medial osteotomy followed by the lateral osteotomy. In doing so, the nasal bones can then be mobilized, or moved easily, and brought back to a more midline orientation and position. In lay terms, this is essentially re-breaking the nose to try and restore the original normal position and shape.

At the conclusion of the closed rhinoplasty procedure, a cast is placed on the nose in order to keep the nasal bones in the desired position. This cast is typically removed between 5-10 days after surgery. At that point, there is usually a mild to moderate amount of swelling. But by the second week out from closed rhinoplasty surgery, most patients feel comfortable resuming normal public appearance as the swelling continues to subside.

In crooked nose cases like this, health insurance will usually provide coverage for the surgical repair. In my practice, we accept essentially all PPO insurance plans – including United Healthcare PPO, Aetna PPO, Cigna PPO, Blue Cross PPO, Blue Shield PPO, and many others that traditionally will provide coverage for nasal reconstructive surgery like this. Unfortunately, we do not accept any HMO insurance plans.

Take a look at his before and after crooked nose repair photos shown here. On his frontal view, you can see just how much better his nasal alignment is following the closed reconstructive rhinoplasty surgery. No longer can you see the curvature to his left side. Instead, his nasal bridge has been repositioned and reshaped to bring the bones into nearly a straight line. On his oblique (45 degree angle) views you can also readily appreciate the improvement made from the reconstructive nose surgery. Where he previously had the depressed segment on the right side of his bridge (which is best seen when looking at him from his left side), he now has a much more symmetrical oblique angle view. That is because the nasal bone has been essentially ‘lifted up’ on his right side while the entire bony structure has been moved more to the middle of his face. Look for yourself and see just how similar his oblique views are now that the surgery has been performed. Overall, I happen to think this is a great result for him. In fact, looking at his nose now one would not even imagine it was once broken and shifted to the side. In addition to all of this, the functionality of the nose is improved so there is much more equivalent airflow through both sides. 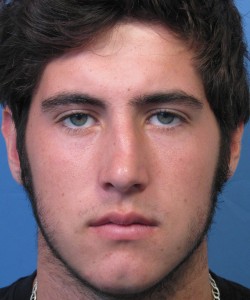 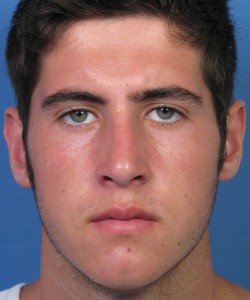 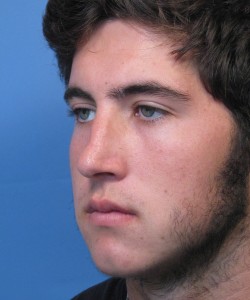 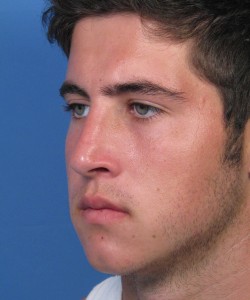 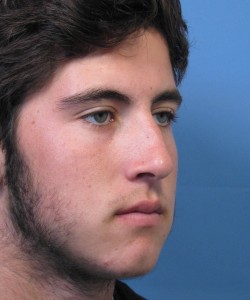 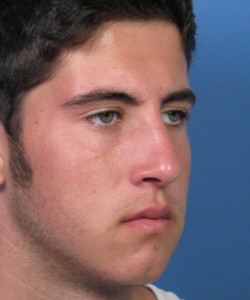 If you have broken your nose and sustained a nasal fracture that needs corrective surgery, contact our office today to schedule a consultation. My staff and I are quite proud of our reputation as one of the most respected regional referral centers for reconstructive nose surgery. I look forward to being involved in your care and recovery.