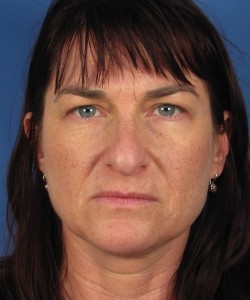 This is a great case example of how rhinoplasty surgery can help to address a ptotic nasal tip. The term ‘ptosis’ means ‘drooping’ of the nasal tip region. These type of noses are also commonly referred to as drooping noses and hook noses. When you see a ptotic nasal tip, you really do notice it because one can easily appreciate how the tip of the nose appears to drop off from the end of the nose. On frontal view of the nose with a ptotic nasal tip, the nose appears to be quite rounded – in fact, in many cases the nasal tip appears to have a more ovoid shape to it as seen in the adjacent preoperative photo. The other finding that is commonly seen in the ptotic nasal tip is a relative lack of nostril show. This is completely opposite of what is typically seen in the over-rotated, or piggy, nose. What most patients don’t realize is that it is normal to see some degree of nostril show on the frontal view. But just as it is abnormal to see too much nostril show, it is also abnormal to see no nostril show – which is the case here. If you look at her nose from the frontal view, there is really no dark shadowing seen where the nostrils are located. 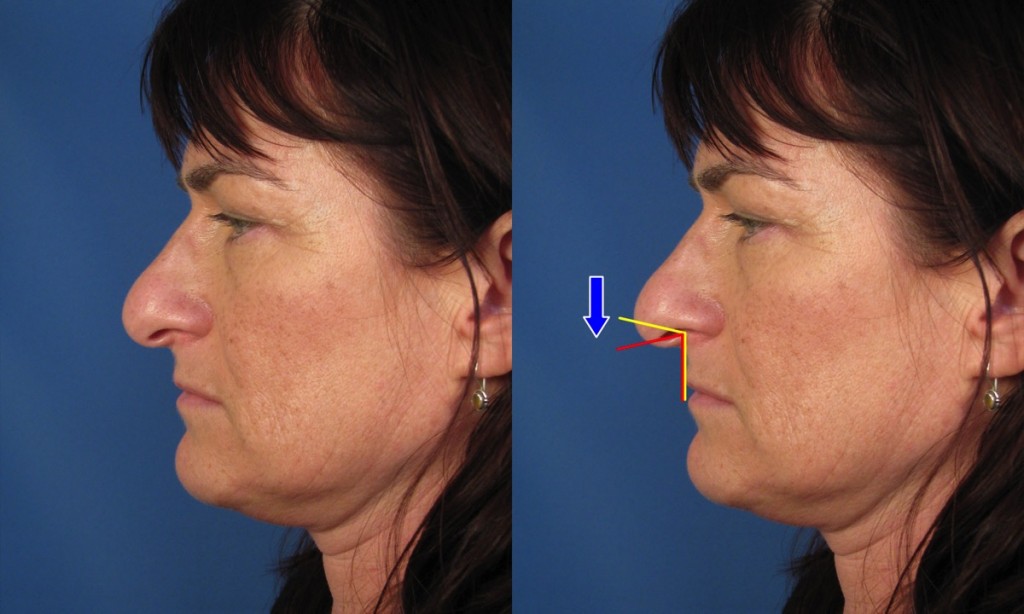 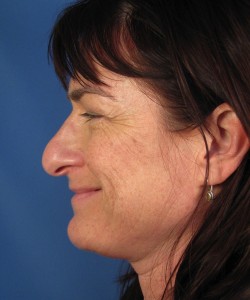 When this patient smiles, you can see how the nasolabial angle becomes even more acute. Now this is something that happens with nearly everyone when they smile – the tip of the nose will appear to drop down a few degrees. This is largely a result of the depressor septi nasi muscle that, upon contraction, shortens the upper lip region. As one smiles, this muscle contracts and appears to pull the tip of the nose down a bit. In cases of a ptotic nasal tip that starts off well below where it should be positioned, this additional drooping becomes even more pronounced as seen here.

In many rhinoplasty patients, surgeons will recommend transection, or cutting, of the depressor septi nasi muscle. The thought is that by eliminating this muscle activity, the upper lip will not shorten as much with smiling and the nasal tip will not droop down as far as it does – the end result being the nasal tip appears to have been lifted up. But is this procedure really necessary? And will cutting the depressor septi muscle change one’s smile after surgery? The answers to these questions are actually a bit controversial among rhinoplasty surgeons. In my opinion, I don’t really find it necessary to cut the muscle as part of a rhinoplasty procedure. If you were not having a full rhinoplasty, you could opt to cut this muscle as part of an isolated procedure. However, the results, in terms of elevating the nasal tip, may not be as dramatic as desired. If a formal rhinoplasty procedure is being performed, I usually recommend alternative techniques to lift the nasal tip without having to cut the depressor septi nasi muscle. This typically involves repositioning of the cartilage framework of the nose to place the nasal tip in a more ideal, aesthetically pleasing location. In terms of the effect on smiling, many rhinoplasty surgeons will tell you that there is very little effect on one’s smile after cutting the depressor septi nasi muscle. But I must say that, anecdotally, I have personally seen many cases over the years where patients note a marked difference in terms of their smile following resection of the depressor sept nasi muscle performed by other plastic surgeons. And these are changes that are way beyond the initial period of healing from rhinoplasty where one’s smile is frequently temporarily affected from early surgical swelling.

Rhinoplasty for the Drooping Nasal Tip 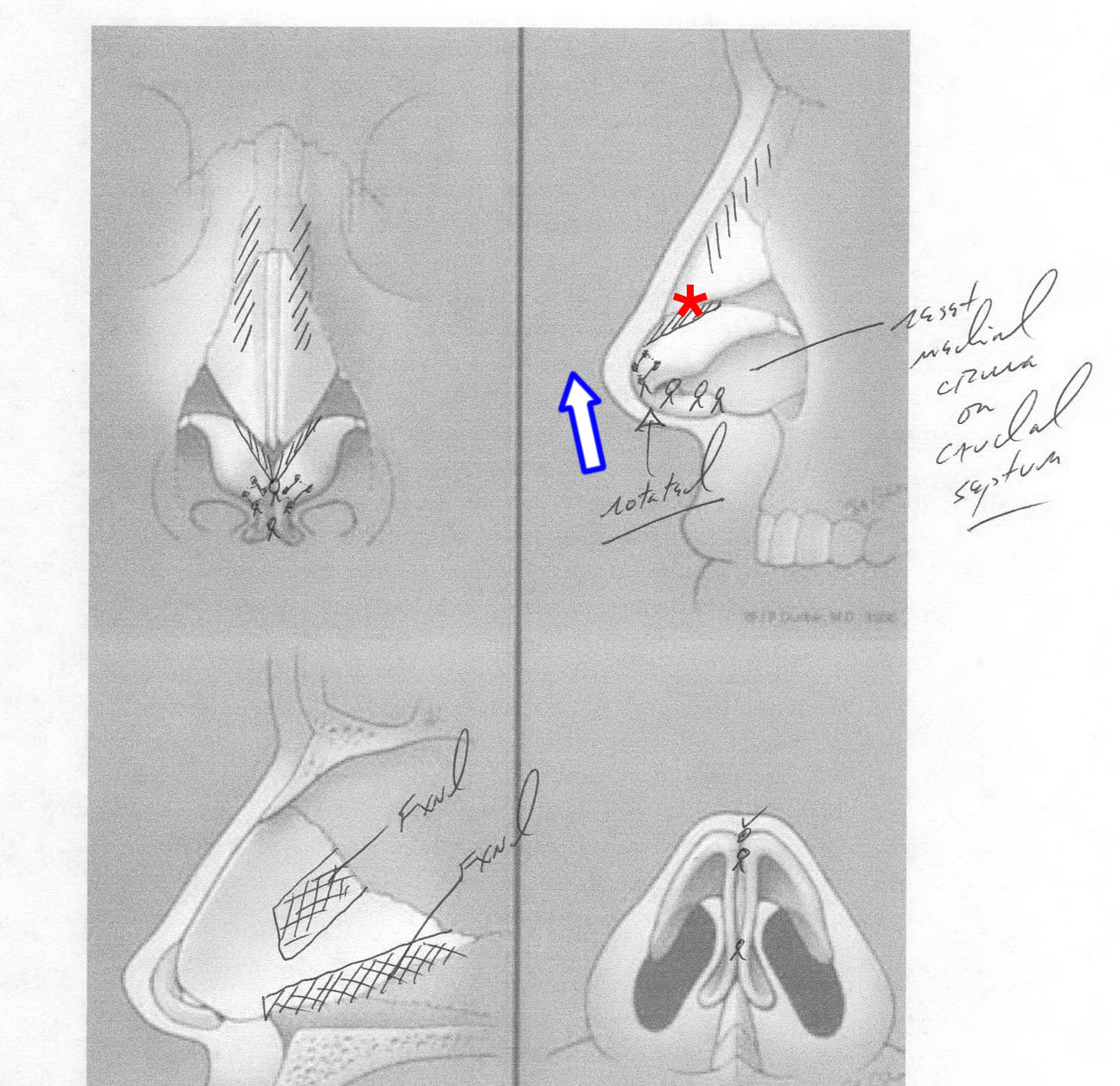 In this particular case, I recommended she undergo an open septorhinoplasty procedure to help in reshaping the entire nose – with specific emphasis on addressing the drooping nasal tip. A rhinoplasty worksheet of surgical changes is shown here. The hatched lines indicate where the bridge was conservatively rasped on each side to create a smoother contour. But this was considered a minor part of this rhinoplasty procedure compared to the desired changes involving the lower one-third of her nose. 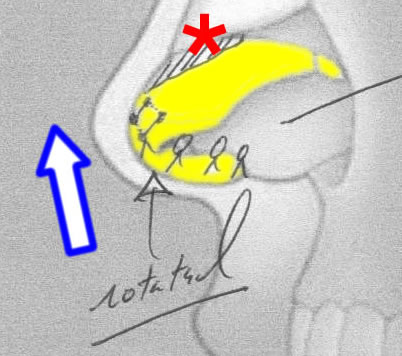 Could her nose have been reshaped using alternative techniques? Absolutely. A number of other rhinoplasty techniques could have been utilized in this case, such as a lateral crural overlay. But, in this particular instance, I felt that deconstructing her tip and repositioning the lower lateral cartilages was the best choice given her anatomical deformity.

As indicated by the rhinoplasty worksheet, a septoplasty was also performed – but more for functional improvement of her breathing.

Ptotic Tip Repair Before and After Photos

Below are the before and after photos showing typical results for correction of the ptotic, or droopy, nasal tip. You can readily see from the photos that she has quite a dramatic change in the appearance of her nose – yet she still looks very natural. Looking at her previously droopy nasal tip in particular, you can see how the angulation with her upper lip is much more favorable – but not excessively rotated. In fact, her nasolabial angle has now been improved to something closer to 100 degrees – over a 10 degree difference compared with her preoperative nose. Even when she smiles, you can see that the tip is quite stable and does not droop much at all – and this is without having to cut the depressor septi nasi muscle. 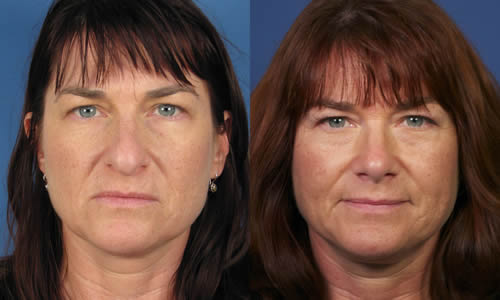 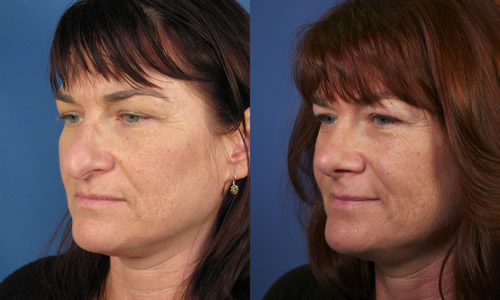 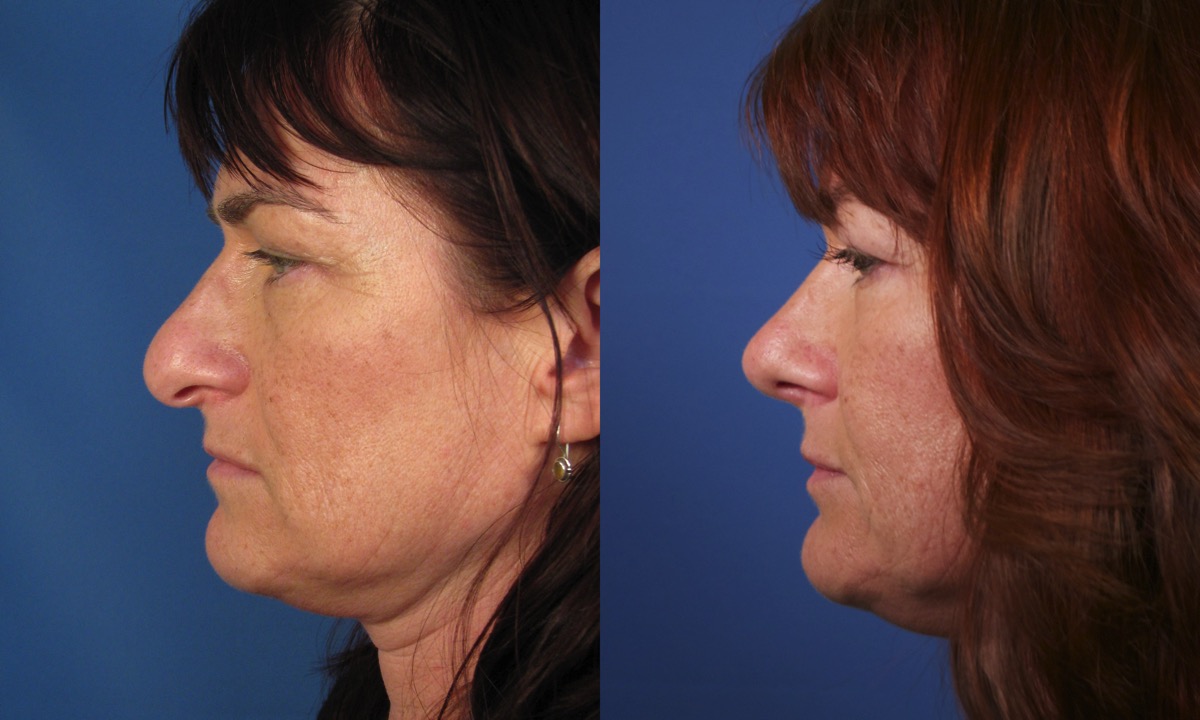 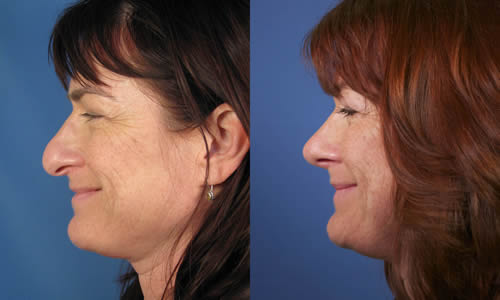 As part of the rhinoplasty consultation process, I will commonly perform computer imaging of the patient’s photos to help provide a realistic vision of what the surgery might produce. If you are wondering how close the actual results are to the imaged photos, you can see for yourself right here. On the left side is this patient’s before rhinoplasty lateral view. In the middle is the computer enhanced image I provided to her showing the surgical goal. On the right side is her actual post rhinoplasty lateral view. As you can easily see, the actual rhinoplasty result is quite close to the computer enhanced image discussed before her surgery. Obviously it is unrealistic to think the real life result is going to be an exact match of the imaged photo. But, in my opinion, it is pretty darn close – which was the real goal all along.

If you happen to have a ptotic or drooping nasal tip, don’t hesitate in contacting my office today to schedule a personalized consultation to see what cosmetic nose surgery can possibly do for you.