Over the past decade (and even more so in the last 5 years), my practice has seen a steady rise in the number of teenage patients seeking cosmetic nose job, or rhinoplasty, surgery. This observation is backed up by a number of recent studies that have confirmed the increasing number of teenage patients seeking cosmetic nose reshaping surgery. Such a trend is really not surprising, though, given the rapid growth of various social media platforms, such as Snapchat, Instagram and Facebook. There is no denying that, increasingly, teenagers are becoming more and more aware of their noses (along with other facial features) in this era of selfies and candid social photography. According to the American Academy of Facial Plastic and Reconstructive surgery, this exact trend is behind much of the spike in teenagers seeking cosmetic facial surgery in recent years. Combining this image consciousness with the fact the nose is so central to one’s facial appearance and there is no wonder that large numbers of teens are consulting doctors like me to have their noses reshaped. 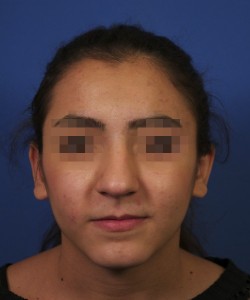 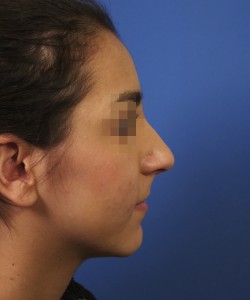 One example of a San Diego teenager seeking rhinoplasty surgery is presented here. This very pleasant young lady consulted with me to discuss changing the appearance of her nose. She was mostly bothered by the simple fact her nose was too big for her face. Indeed, when looking at her nose from the frontal view, you can see that it is a bit wide for her overall facial appearance. This was especially true for the nasal tip region where I would describe her tip as being somewhat broad and flat. On her side view, her bridge demonstrates a slight convexity, or hump, which further contributes to the nose looking too big. All in all, she desired to have rhinoplasty surgery to make the nose appear smaller and more feminine in shape.

It is import to note that this patient clearly has underlying ethnic facial features that needed to be appreciated when considering the nose reshaping process. It would look quite unusual if a rhinoplasty surgery was to put a largely Caucasian-looking nose on this face, right? Believe it or not, this is still done all the time by some plastic surgeons even in today’s day and age of advanced rhinoplasty technique. For example, some rhinoplasty surgeons have a ‘signature’ nose they create on a consistent basis – regardless of the facial features. They try and create a certain bridge height coupled with a particular angulation to the nose that is done in conjunction with a specific pointed tip shape. Try doing this and you will quickly find that a great majority of your ethnic rhinoplasty patients will be quite dissatisfied with their outcomes. Instead, all rhinoplasty surgeons should make it their goal to create a nose that is ethnically consistent in context with the surrounding facial features. In this case, for example, it would be a nose that ultimately still appears as if she could have been born with it.

So what about timing of teenage rhinoplasty surgery? I happen to consult with quite a few teenage patients seeking cosmetic rhinoplasty surgery. Plus I see this exact question all the time in online rhinoplasty chat sites and forums. When it comes to timing for cosmetic nose reshaping surgery, I usually will recommend females wait until they are somewhere between 15-17 years of age at the earliest. Male rhinoplasty candidates should wait a few years later until somewhere between 17-18 years of age. Much of this reasoning relates to making sure the nose is not going to continue growing much after the surgery – which could significantly affect the healing process if this were the case.

After discussing the possibilities of cosmetic rhinoplasty with the patient, she elected to proceed with the surgery. I ended up performing an open rhinoplasty approach – mostly based on the fact I needed to reshape her tip to create more definition. Had I been doing mostly bridge work, I would likely have recommended a closed rhinoplasty approach. Ultimately, the open approach provided me with excellent exposure and access to her nasal tip cartilages and bridge – along with the opportunity to make much more precise changes to the nose. 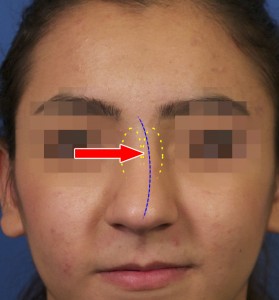 As part of her rhinoplasty procedure, I did reduce her bridge height just a bit. This primarily involved rasping the bridge of the nose using specialized instruments to create a smoother profile view. Once this was done, I then had to ‘break’ her nasal bones. Meaning, I had to move the nasal bones inward so that we maintained a nice, narrow frontal view. The precise location of the break is noted in the adjacent photo diagram and represented by the hashed yellow, curved lines. Had I not broken her bones after rasping the bridge, her nose would likely have appeared excessively wide – the exact opposite of what we were trying to achieve in the first place. In addition, her bridge was actually crooked. Although certainly not as crooked as many noses I repair, it was nonetheless asymmetrical. This is noted in the diagram by the red arrow showing how her nasal bridge was displaced off to her left side – creating an overall curved contour as indicated by the blue hashed line. So in the process of breaking her nasal bones to narrow them, I also was able to draw the alignment into a more midline orientation – making her bridge essentially straighter. 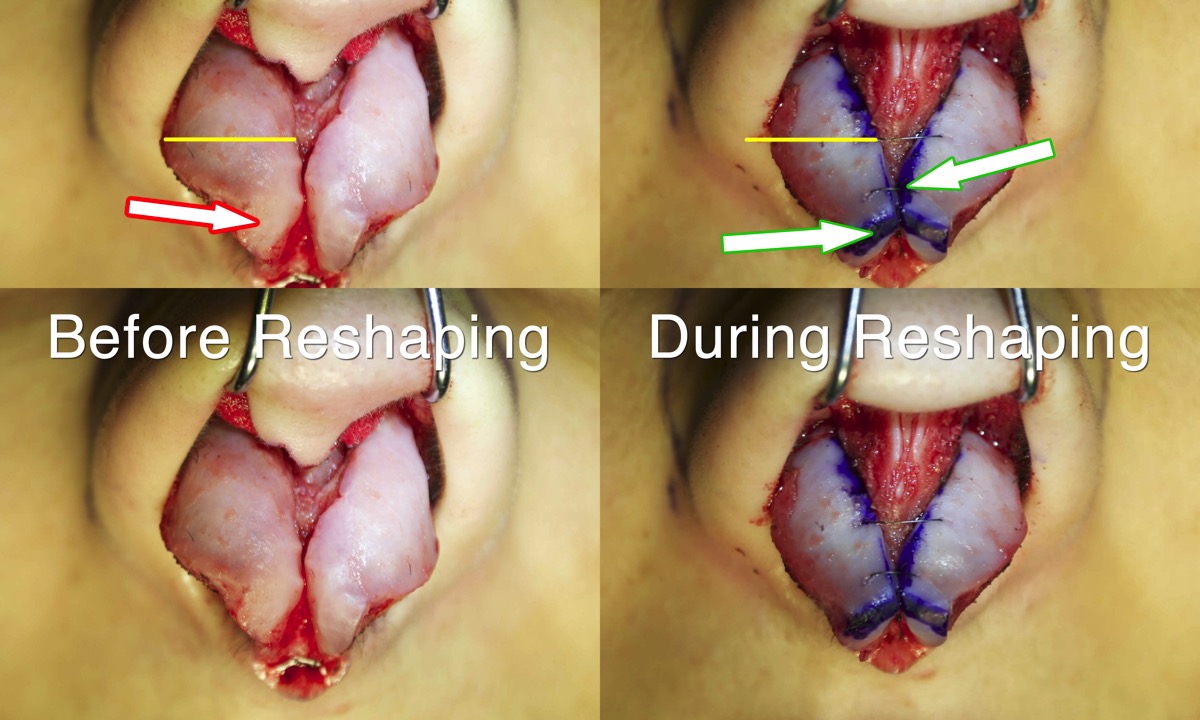 Once these changes were made to the bridge, attention was focused on her nasal tip region with the goal being a more defined looking nose. Some intraoperative photos of the nasal tip region are shown here for better understanding of how these changes were accomplished surgically. If you look on the left side, you will see the tip cartilages after the skin and soft tissue were pulled back. On the right side you will see these same tip cartilages after they were reshaped during the rhinoplasty procedure. The blue markings seen on the cartilage are actually from the surgical marking pen used to map out the specific changes being made to the tip. The overall sense you will get comparing the left and right photos is that the tip cartilages are now in a more narrowed shape and orientation. For example, the yellow line indicates just how wide the lateral crus segment was upon opening the nose. Looking at the right side you can easily appreciate how much the cartilage was narrowed – in this case using a cephalic trimming technique – by seeing how wide it used to be based on the same yellow line. Before surgery the domal region (indicated by the red/white arrow) was not only asymmetrical, it was also poorly defined. In an attempt to correct these issues, I ended up using a series of permanent sutures (green/white arrows) to make the tip more symmetrical and refined. On the right side, you can appreciate how the tip cartilages have been made to be nearly equivalent in shape and size while also appearing as if they are projecting out toward you now. This is precisely what was done with the suture reshaping – an established rhinoplasty technique called dome-binding sutures whereby the cartilage is crimped in precise locations to create the desired tip definition. 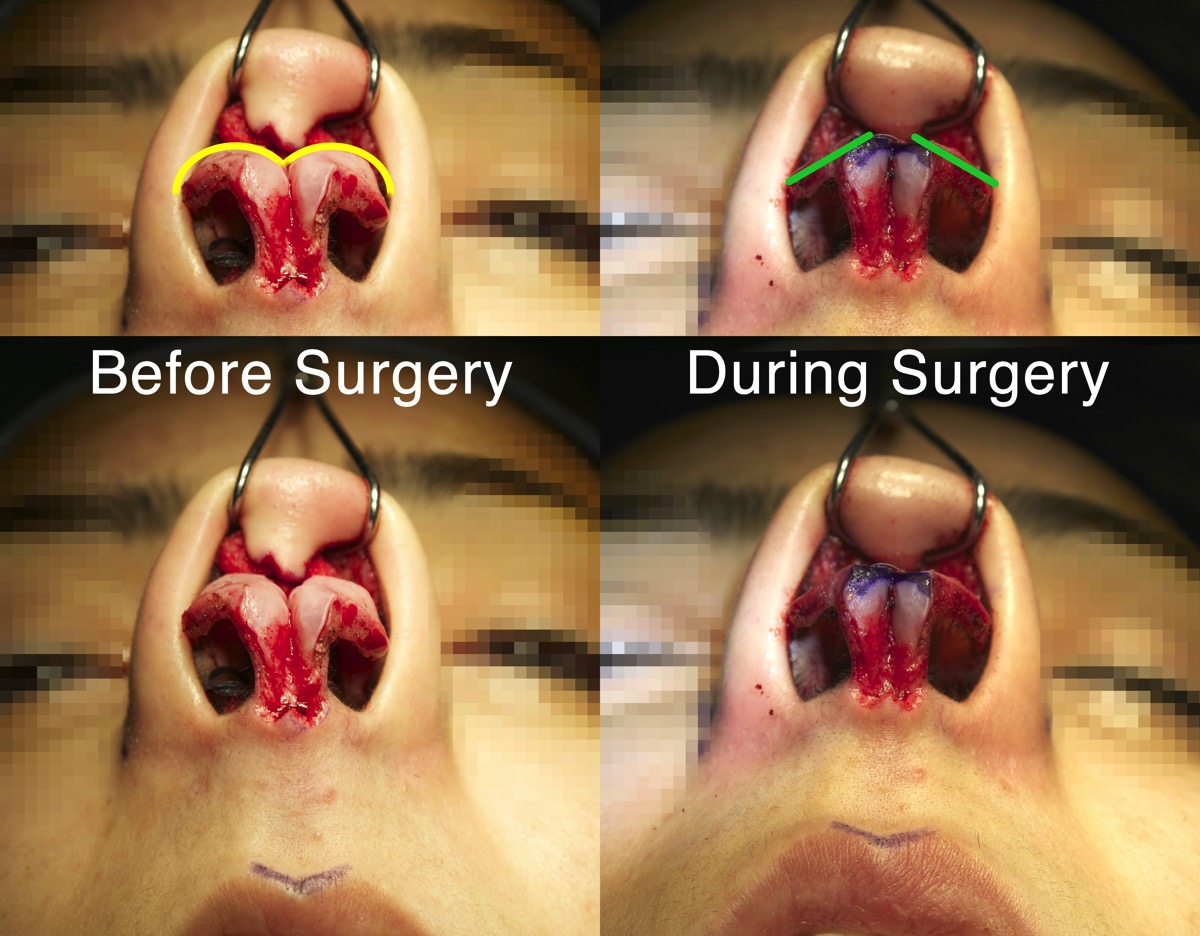 When looking at these same tip cartilages from below, you can also see a marked change in how the nasal tip has been reshaped. The left side, again, shows what her tip cartilages looked like upon opening the nose. On the right side you can see what these same tip cartilages looked like during the rhinoplasty surgery. Before surgery you can see how the overall shape of both lower lateral cartilages was more rounded (as indicated by the curved yellow lines). Once the cartilage was trimmed and the sutures were placed during surgery, the shape and orientation of the cartilage was greatly improved. For instance, you can easily appreciate how the lateral crus on each side is now a more ‘linear’ instead of being rounded (as shown by the green lines). In addition, the domes that comprise the nasal tip have now been brought together very nicely, which has also improved her nasal tip projection. The summary effect from this series of rhinoplasty maneuvers is a nasal tip that is more triangular in terms of overall shape – exactly what we were trying to achieve.

Attached are the before and after teenage rhinoplasty photos showcasing the overall changes that were made to her nose.

As you can see comparing the before and after images, the goals of the surgery were successfully accomplished. In particular, you can see how her nasal tip is much improved with a more defined shape. One of my favorite views in this case example is the base view of her nose before and after surgery. In the after photo, you can really see the difference in terms of the tip shape – where she was quite wide and flat before surgery and is now more triangular following rhinoplasty. When you look back at the intraoperative photos shown above, you can really see how the cartilage reshaping process correlates with the final shape that is seen here.

In addition, the bridge has been straightened and narrowed on the frontal view while giving her a smoother contour as seen on the profile view. As I always try to emphasize, it is important to nose that these changes were made while maintaining a very natural, ethnically consistent look to her nose. 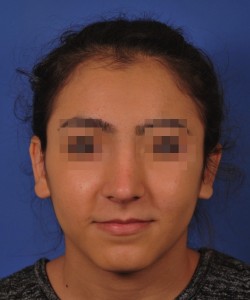 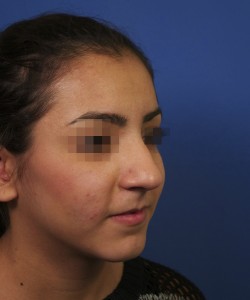 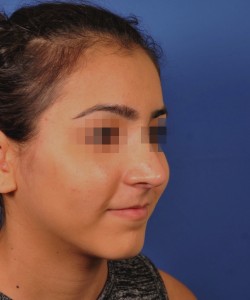 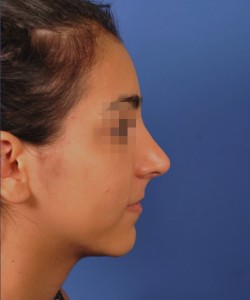 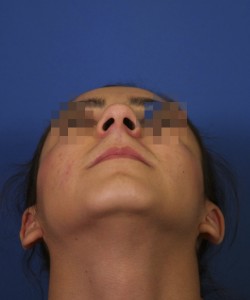 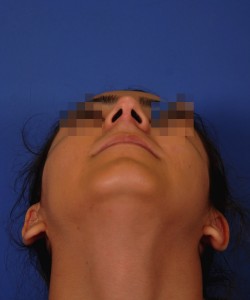 If you are a teenager who is unhappy with the appearance of your nose and interested in undergoing cosmetic rhinoplasty, feel free to contact my office today to schedule a personalized consultation with me. Keep in mind that all minors must be accompanied to the consultation by a parent or legal guardian.