This particular patient is a great example of how cosmetic rhinoplasty can be used to address a nasal bridge hump deformity in a female. This young lady from San Diego, CA consulted with our office complaining of a bump on the bridge of her nose as well as asymmetry when looking at her nose from the front. In addition, her nasal tip was more rounded than she desired. Overall, she was looking to make her nose smaller and more in balance with her surrounding facial features.

During her rhinoplasty consultation in our San Diego office, we reviewed what was recommended in terms of the nose reshaping process. These issues are highlighted in the adjacent pre-rhinoplasty photo diagrams. 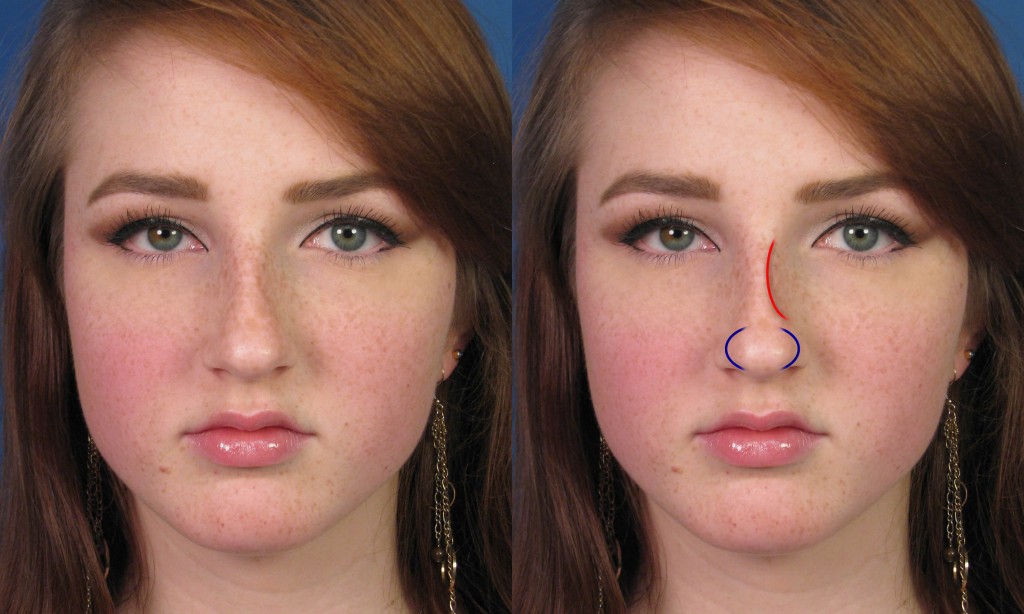 On her frontal view, you can see that her bridge is asymmetric, or crooked from left to right. This is indicated by the red curved line that demonstrates how her bridge appears collapsed inward on this side. If you take a step back and look, in general, at the width of her nose as seen from the front, you will also appreciate that it looks too narrow for her face. When this is seen in context of her nasal tip being too rounded (as indicated by the blue parentheses), her excessively narrow bridge appears even more exaggerated. The appearance of an overly thin nasal bridge is a direct function of her nose having a hump deformity. As in many patients with a nasal hump deformity, the frontal view of the nose will often times appear excessively thin due to the high nasal bridge causing more abrupt shadowing when light hits it. Learn more about this issue with dorsal hump deformities and rhinoplasty surgery by clicking here. 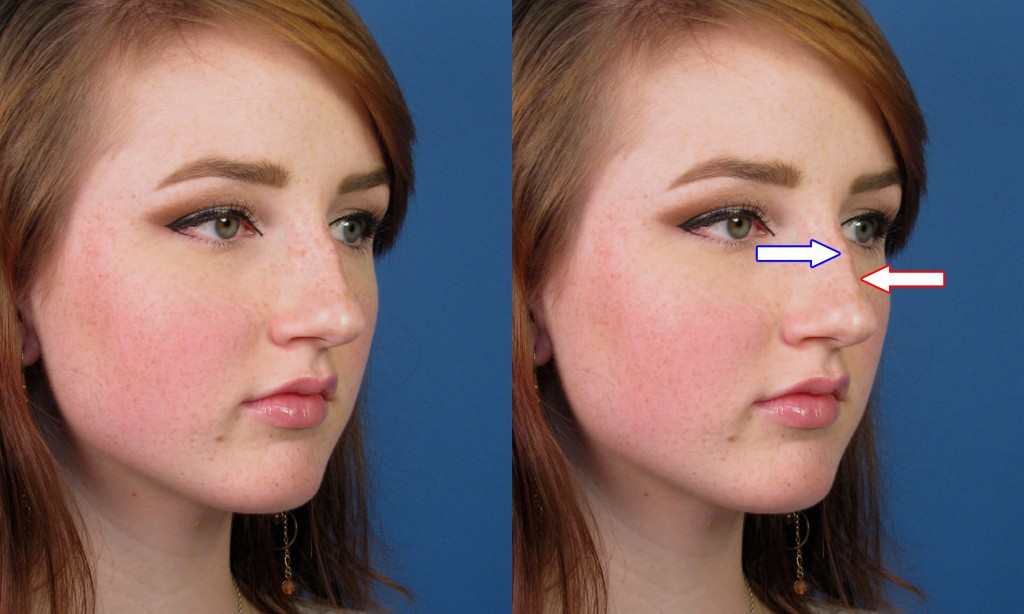 When looking at her nose from the oblique, or 45 degree, angle, you begin to get a better appreciation of the nasal hump deformity in this case. This is shown in the adjacent photo diagram as a blue arrow – highlighting where the nose looks too high. The red arrow corresponds to the side of the nose that is collapsed inward – correlating to the red curved line noted above. When looking at the patient’s right oblique angle, we are actually looking at the left side of her nasal bridge. This is why the left collapsed side wall of the nose is best seen when looking from this angle. The excessively high bridge in combination with collapse of the left side of the nose makes this oblique angle view particularly telling in terms of cosmetic issues with her nose. 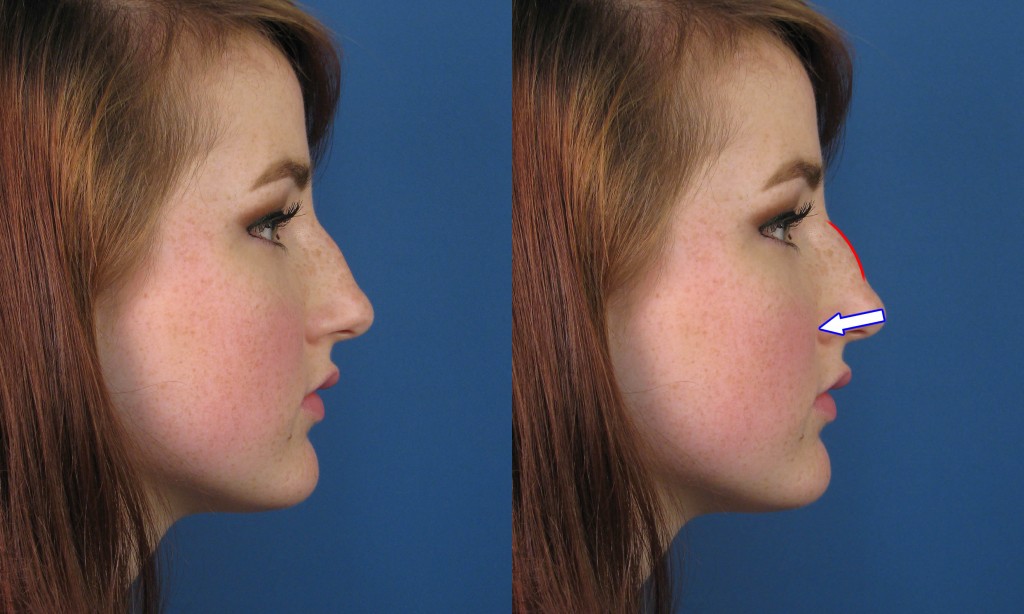 On the lateral, or side, view of her nose you can easily appreciate the hump deformity issue alluded to above. This is highlighted by the red curved line, although it is quite obvious when simply glancing at her profile view. If you look really closely at her nasal tip, you can also get a sense that her tip is projected out from the face slightly more than it should be. This is termed ‘overprojection’ of the nasal tip since the nose appears to stick out too far from the plane of the face. In order to effectively reshape this patient’s nose, consideration must be given to not only reducing the nasal hump deformity, but also repositioning her nasal tip.

One issue that is not necessarily visible in these photos relates to the thickness of her nasal skin. This is an important consideration when it comes to rhinoplasty surgery as the skin thickness often times dictates how much change will actually be visible following surgery. In her case, the nose skin was considered ‘medium thickness’ – not too thick and not too thin. This meant her nasal skin was likely going to conform to whatever changes were being made to the underlying cartilage and bone – but without shrink wrapping down too much, which would risk showing even minor contour irregularities under the skin.

One of the central concerns in this particular patient was properly managing the hump deformity in the context of making her nose appear better overall in terms of balance with her face. Many unexperienced rhinoplasty surgeons would look at her nose and think to themselves – easy. Just sand down or reduce the nasal bridge hump with removal of some cartilage from her nasal tip and – voila – that is all that is needed. Unfortunately, this approach is much too simplistic for a nose like this and in a good majority of rhinoplasty cases will result in all sorts of problems. For instance, if you just sand (rasp) down her nasal hump and narrow the nasal bones to manage the bump – without doing anything else – she will likely end up with what is called an inverted V deformity in the world of rhinoplasty. 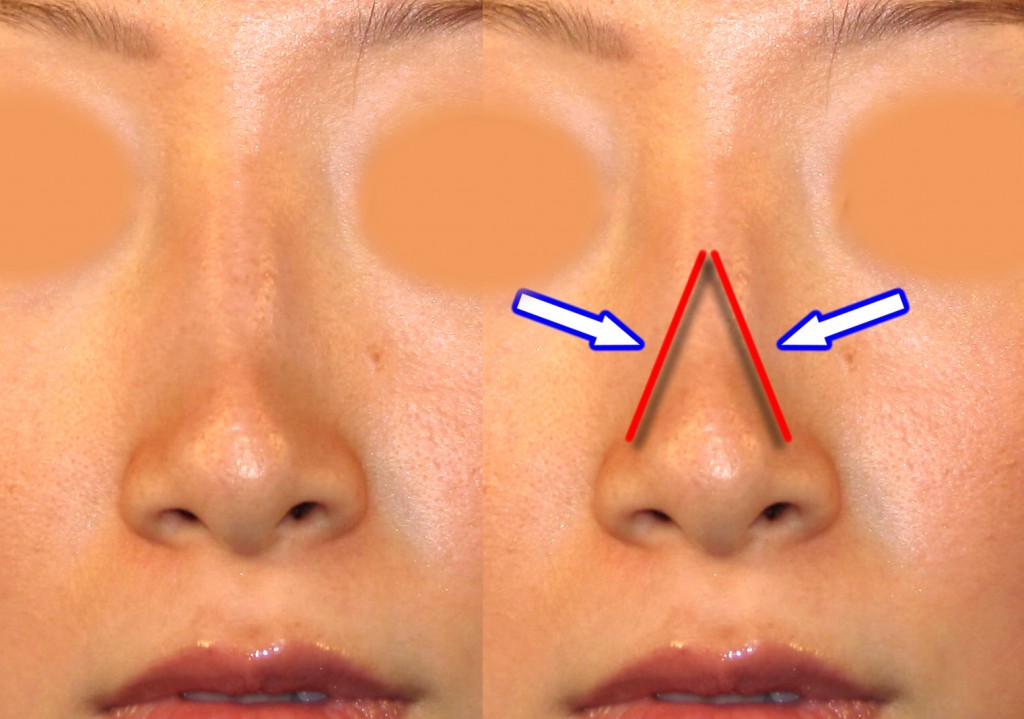 An inverted V deformity is visually demonstrated in the adjacent photograph of a patient who had prior rhinoplasty by a different plastic surgery clinic. She originally had a dorsal hump deformity that was removed by simply rasping, or sanding, the nasal bridge down. Unfortunately, the rhinoplasty surgeon did not do anything else to reinforce the middle portion of her bridge, called the middle nasal vault, after bringing the bridge height down. As the healing process unfolded, the middle nasal vault, which is composed of the upper lateral cartilage on each side, began to collapse inward. This is indicated by the blue outlined arrows showing where the upper lateral cartilage is situated. Since much of the support of the upper lateral cartilage was removed during the hump reduction without stabilizing the remaining cartilage structure, this area began to collapse. This is particularly true in patients, like this case example, who have thinner skin than average. This type of inverted V deformity does not occur within the first few months of rhinoplasty healing. It is a phenomenon that begins to manifest 6-12 months after surgery – as the swelling of the nose begins to subside. The end result of this collapse is an abnormal pinching that can be seen through the middle nasal vault region. This causes an undesirable shadowing effect in the shape of an inverted V through the middle of the nose as seen from the front view – thus the inverted V deformity.

In this particular rhinoplasty patient from San Diego, CA, the hump deformity was reduced as expected. Once this was accomplished, the nasal bones were narrowed using careful osteotomy technique – where the bones were cut (broken intentionally) and brought in closer to one another. After this was done, the spreader grafts were placed to stabilize the middle vault as previously discussed. The spreader grafting was done more on her left side to address the preoperative asymmetry that was noted in the photos above. After this was done, her nasal tip was then refined by narrowing the cartilage and creating a more feminine nasal tip.

Before and After San Diego Rhinoplasty Photos

The general trend that you can see in the series of rhinoplasty photos is how swollen many rhinoplasty patients appear at one week out from surgery. Just look at her tip, for instance, on this frontal view. You can appreciate that her tip is moderately bulbous at one week, which simply represents the fact that a considerable amount of work was performed during rhinoplasty to reshape the tip cartilage. As the months of rhinoplasty healing begin to unfold, though, you can see how the tip begins to shrink down progressively while starting to take shape and definition. At one year out from rhinoplasty, her tip has now become even more refined with a more feminine overall look. You will also appreciate in these frontal photos that her nasal bridge width is now more fitting for her face. Prior to cosmetic rhinoplasty, she had an overly thin bridge as seen from the front with more pinching noted on her left side. Following cosmetic nose reshaping surgery, her bridge is now more symmetric and has a more appropriate width overall as seen from the front. 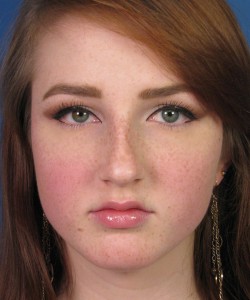 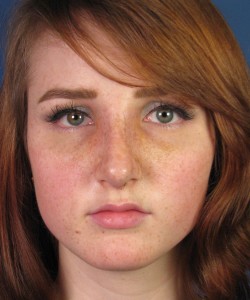 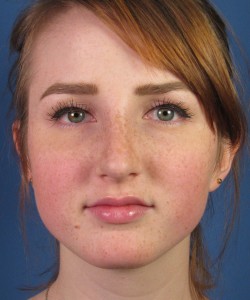 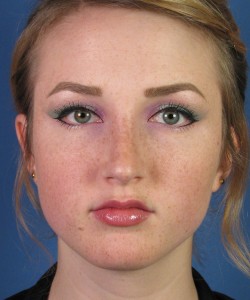 On the oblique view of her nose, you can begin to get an appreciation of how the bridge height has been adjusted through rhinoplasty. Even very early on in the rhinoplasty healing period at one week out, you can see how her nasal hump is now gone. Is she swollen? Absolutely. But as the months begin to pass by, her nose begins to take a better shape as a result of the rhinoplasty. By one year out, you can see that her nasal bridge has come down quite a bit to leave her with a very feminine contour. Looking at her nasal tip on the oblique view, you can also see how it begins to take on a more refined appearance as the swelling subsides. 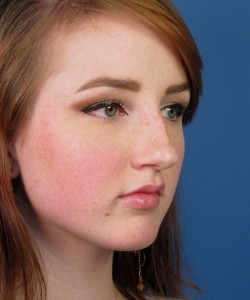 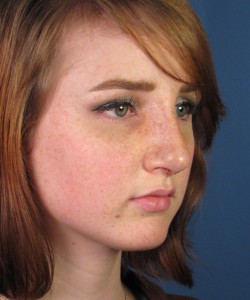 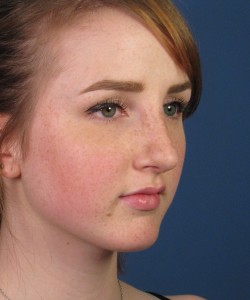 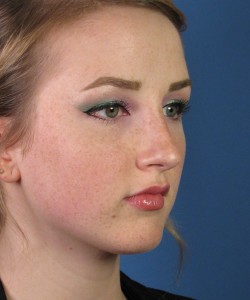 On the lateral view of her nose, you get the best perspective of how her bridge has been refined through rhinoplasty surgery. At one week out, you can see that her overall bridge height is somewhat pronounced, even compared to before having rhinoplasty surgery. You can also see her healing incision line under the nasal tip region on this lateral view. As the months go on, the nasal bridge height begins to shrink down, creating a more feminine profile view. At one year out from rhinoplasty reshaping of the nose, her bridge has reached a fairly stable height transitioning very nicely into her tip region. If you look closely, her nasal tip is now actually closer to her face after being deprojected during the rhinoplasty procedure. This effectively makes her nose appear actually smaller than it did before nose reshaping. Overall, she now has a nose that is much more fitting and in balance with her face with a very natural appearance. Looking at her today, you would never think that she has undergone a surgical transformation of her nose. That is the essence of doing great rhinoplasty. 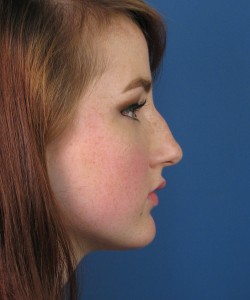 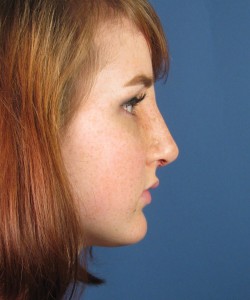 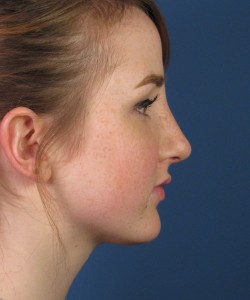 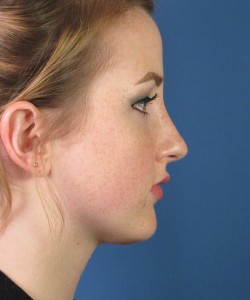 To consult with one of San Diego’s best cosmetic nose surgeons who specializes in creating natural looking rhinoplasty results, call us at 619-296-3223.