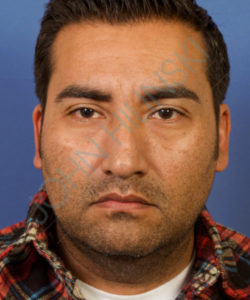 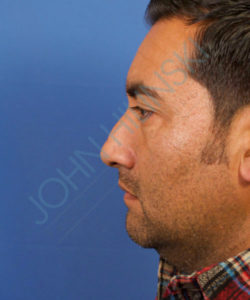 This is a great example of male, ethnic rhinoplasty performed by San Diego’s leading nose job surgeon, Dr. John Hilinski. This patient consulted with Dr. Hilinski with the hopes of making his nose more defined overall. He particularly disliked the fact his nasal tip was quite bulbous and ill-defined. He also did not like the curvature along the nasal bridge and the fact his nasal tip drooped down a bit.

Yet – like so many San Diego men seeking rhinoplasty surgeons – he did not want a nose that was going to look feminized or fake on his face. This may seem obvious to most patients. But – believe it or not – there are some rhinoplasty surgeons in San Diego who still perform the same type of nose job on all patients – whether or not you are a male or female!

The other consideration in this patient was the thickness of his skin. Being here in San Diego (and well into Orange County and Los Angeles), there are quite a few male patients with mixed ethnic backgrounds seeking rhinoplasty and nose job surgery. This includes a lot of rhinoplasty candidates who are a mix of Hispanic, Middle-eastern, and Asian backgrounds. Why does this matter? Because thicker skin is sometimes harder to deal with when it comes to cosmetic nose job surgery where you want the nose to look smaller and more defined. Thicker skin simply doesn’t want to shrink down to a new, smaller size when it comes to rhinoplasty surgery. In males with mixed ethnic backgrounds, thick skin can be particularly challenging if you are wanting to make the nose look smaller and more refined. That is why Dr. Hilinski is constantly discussing this issue in male rhinoplasty patients like this who want to have their nose made smaller in size.

Dr. Hilinski ended up performing an open septorhinoplasty on this patient. This included complete reshaping of the nasal bones – reduction of the hump deformity as well as breaking the nasal bones to narrow the bridge. In addition, Dr. Hilinski refined his nasal tip by making the underlying cartilage smaller and more triangular in shape. Fortunately, in this case, the patient’s skin shrunk wrap quite nicely over the following 1-2 years. The end result can be seen in the photos below. Overall, you can easily appreciate how he had a nice, beautiful, dramatic improvement in terms of the shape and size of his nose. But the nose still appears very natural looking for his ethnic face – without any obvious signs that he underwent a nose job. 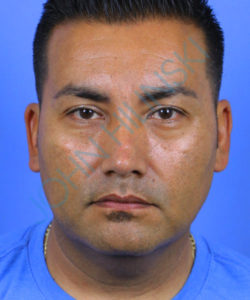 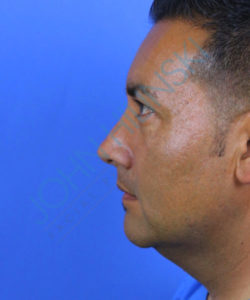 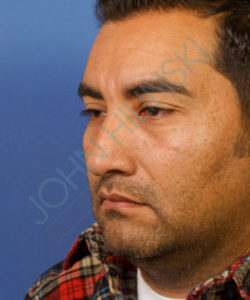 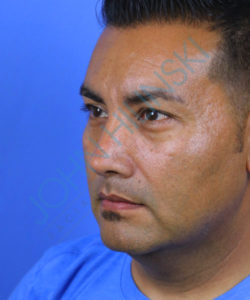