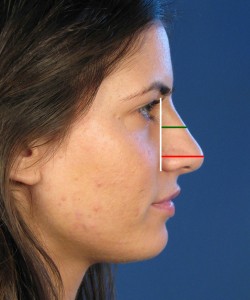 In the adjacent photo example of a rhinoplasty patient from San Diego, CA, the red line represents nasal tip projection. In this particular patient, the nose was thought to be excessively large overall in proportion to the remainder of her face. A significant factor in this assessment is how far out the nasal tip is projected since this often times determines the overall size of the remaining nasal structures. For example, the bridge height typically follows the nasal tip outward. In this case, her bridge height is also excessive since it transitions directly off of the nasal tip position (see green line). In some cases you will find a rhinoplasty patient who has an excessively over projected nasal tip with a normal bridge height, but this is quite rare.

As rhinoplasty surgeons we are trained to measure the nasal tip projection in relationship to other areas of the nose in order to determine whether or not there is over projection. One of the most common is the Goode method, named after Dr. Richard Goode from Stanford. In reality, though, most experienced rhinoplasty experts will simply look at the nose and determine by gestalt if the nasal tip is over projected. This is much the same way rhinoplasty patients look at themselves and subjectively note that their nose is just too big for their face. Sure you can measure it using the Goode method. However, if the nose looks too big on the face it probably is too big for the face.

What Causes An Over Projected Nasal Tip?

An overly projected nasal tip is most often the result of the underlying lower lateral cartilage, also known as the LLC. In the adjacent diagram, the LLC is indicated as the red shaded structure. There are actually a pair of lower lateral cartilages – one on each side – that primarily contribute to the shape and position of the nasal tip. When the LLC is positioned too far out on the nose it will then appear overly projected.

In revision rhinoplasty patients who have had prior cosmetic nose reshaping, their nasal tip might be overly projected because of different reasons. A common reason in the revision rhinoplasty population is that the bridge may have been over reduced, or brought down too much, while leaving the tip in proper position. In this situation the nasal tip may appear overly projected, but the true problem is the nasal bridge that needs to be brought back up to a more appropriate level.

Rhinoplasty For An Over Projected Tip

The goal in rhinoplasty for an overly projected nasal tip is to bring the tip of the nose closer to the face (deprojection of the nasal tip) while maintaining proportion with the remainder of the nose and face. As noted above, the bridge height is often times excessively high in patients with an overly projected nasal tip. Therefore, it is frequently necessary to reduce the bridge height while bringing the nasal tip in closer to the face.

In many cases where the nasal tip is being deprojected, the nose also has to be rotated slightly to maintain proper esthetic balance. To some degree this is directly proportional to the amount of tip deprojection being performed.

The following is a case example of how the nasal tip can be successfully reshaped to deproject the nose. As was noted above, this particular patient complained of a large nose that she wanted reshaped. We previously discussed how her nasal tip was over projected and bridge height was excessively high. We performed a closed rhinoplasty approach during her cosmetic nose reshaping procedure. This included use of what is referred to as a ‘full transfixion incision’ to drop her nasal tip back closer to the face to deproject the nose. Once this was done, we then reshaped her nasal bridge to bring it down to an appropriate height that matched the new position of her nasal tip.

As you can see in her before and after photos, her nasal tip has been successfully deprojected, or brought in closer to the face. The diagrammed photos demonstrate this more visually when you compare the preoperative nasal tip projection (red line) and bridge height (green line). In the after rhinoplasty photo, you can appreciate how much change has been made to the nose. Keep in mind that cosmetic nose reshaping is a game of millimeters. In this type of rhinoplasty, we have brought the tip in closer to the face by 2-3 millimeters and the nasal bridge by a similar amount, which is all that was needed to result in a beautiful looking nose. The nasal bridge was reduced to create a more feminine looking profile view and the nasal tip was rotated just slightly. Overall, she still looks very natural in terms of her appearance and now has a smaller nose that looks as if she could have been born with it. 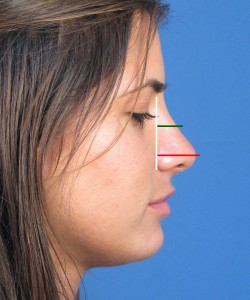 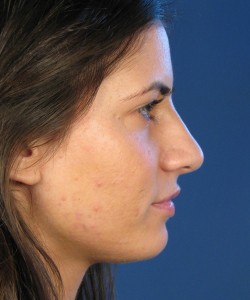 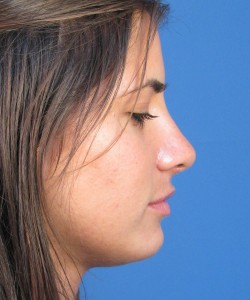