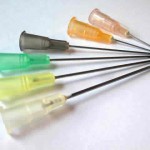 Steroid injections should be considered an important tool in the armamentarium of any rhinoplasty expert or revision rhinoplasty specialist. When we use the term steroids in the world of rhinoplasty and nose surgery we are referring to a very specific type of steroid. The word ‘steroid’ in laymen’s terms often conjures up images of increased muscle growth in body builders. But this actually refers to a different type of steroid called an anabolic steroid that is, indeed, used to build up body mass. The type of steroids we are referring to in rhinoplasty and revision rhinoplasty are called corticosteroids. They are also sometimes referred to as glucocorticoids. Corticosteroids are a certain class of steroids that have a very potent anti-inflammatory effect on our body’s tissues. This can be considered almost the opposite effect of anabolic steroids, in that corticosteroids’ primary effect is to reduce soft tissue volume. Many corticosteroids come in pill form while others are used as an injectable solution. Either way, the main goal when using these type of steroids is to reduce inflammation. When injected into the body, for example, in the nose following rhinoplasty, steroids can help reduce scar tissue and swelling.

The main indication for using steroid injections in the nasal reshaping process is to reduce unwanted swelling. Whenever anyone undergoes a rhinoplasty or revision rhinoplasty procedure, they will inevitably develop some degree of swelling in the nose following surgery. We also refer to this postoperative swelling as edema. Rhinoplasty patients will develop edema of the nose to various degrees depending on the skin type and what was performed during the nose reshaping process. In most rhinoplasty patients, there is an initial phase of edema that resolves within 10-14 days. It is this initial edema that usually keeps rhinoplasty patients from being seen in the public eye immediately after surgery. Fortunately, this edema resolves on its own.

There is a secondary phase of edema that will persist for months to years following a rhinoplasty or revision rhinoplasty procedure. It is this type of persistent edema that we normally target with steroid injections following rhinoplasty. So why do we even inject the nose with steroids following rhinoplasty? In some cases, it is because we simply want to speed up the healing process and provide our patients with the desired nasal appearance sooner rather than later. Much of the edema that might be seen months out from rhinoplasty will typically resolve on its own eventually. But some rhinoplasty patients would rather not wait 6-12 months to see this process take place. In these instances, a steroid injection into the nose might be beneficial.

In other cases, steroid injections into the nose are utilized to prevent unwanted scar tissue from forming. Some rhinoplasty patients have moderately thick (or thicker) soft tissue that is more predisposed to laying down dense scar tissue between the cartilage or bone and the skin. This population mostly includes ethnic rhinoplasty patients (such as Hispanic rhinoplasty, Asian rhinoplasty, Middle Eastern rhinoplasty, African-American rhinoplasty patients). In these ethnic noses, the thicker soft tissue is more prone to scarring in certain areas, such as the supratip region. If this scarring process is excessive, the nasal skin will be prevented from shrink wrapping down to the desired shape of the underlying cartilage and/or bone. If this occurs, the nose will not achieve the desired definition and refinement that would, otherwise, be possible. In these ethnic rhinoplasty patients, a strategically placed steroid injection can be used to prevent this unwanted scar tissue from forming at all. The benefit is that the patient will then have maximal chance of achieving the best possible rhinoplasty result.

Still in other cases, steroid injections are used to treat scar tissue that has already formed in the nose following rhinoplasty. In these patients, the scar tissue has already been established and is preventing the nose from looking its best in terms of definition and refinement. This is typically the same rhinoplasty population as noted above in terms of ethnic noses (such as Hispanic nose, Asian nose, Middle Eastern nose, African-American nose patients). In patients with scar tissue that has already formed in the nose, a steroid injection can be used to dissolve the dense scar effectively allowing further contouring and shaping of the nose.

Choice Of Steroids Used In Rhinoplasty

There are many different steroids that one can choose from to help reduce inflammation. Cortisone is probably the most popular example of a corticosteroid used in medicine, however, it is not the preferred choice when it comes to rhinoplasty and revision rhinoplasty. My preference is triamcinolone, which is also known as Kenalog (its brand name). Kenalog is a synethetic corticosteroid that is commercially available in various concentrations. It is measured in milligrams (mg) per milliliter (ml) with higher numbers representing a more concentrated solution. The higher the concentration, the more potent the steroid injection will be. Injecting a higher volume of Kenalog will also great a greater impact in terms of the anti-inflammatory effect that is seen. Most rhinoplasty specialists and nose reshaping experts will use a range of Kenalog concentrations depending on the type of scar tissue or amount of swelling that is noted. This can range from Kenalog 05 (5 mg/ml) up to Kenalog 40 (40 mg/ml) in most offices.

Some rhinoplasty specialists feel that if you are going to use steroid shots, or injections, in the nose you have to do it within the first 1-2 months in order for them to be effective. They base this on the fact that the body is laying down most of the new collagen during these first two months of healing following reshaping of the nose. It is this collagen that eventually forms scar tissue. These rhinoplasty surgeons believe that steroids are best used during this early healing phase since this is the beginning of the scar tissue development process. Frankly, I don’t agree with this philosophy at all. In my opinion, most swelling you see in the nose during the first few months is edema that is going to resolve on its own anyway. In addition, much of the scar tissue that is formed in these first few months is good scar tissue. Keep in mind that not all scar tissue is bad. If you prevent this good scar tissue from forming by injecting a steroid too early, you can actually jeopardize what would have been a beautiful rhinoplasty result. Don’t get me wrong. There are those rare cases in rhinoplasty where you might need to inject a steroid into the nose within the first 1-2 months, but this is quite unusual in my practice.

I normally prefer to wait at least 3-4 months out from nasal reshaping surgery before considering a steroid injection in the nose. By this point in the healing process, most rhinoplasty patients are beginning to really see the change in contour of the nose. It is also at this point where you can better appreciate subtle changes in the shape of the nose. Steroid injections work wonderfully here to help further contour the nose. Waiting to inject at this point is also considered safer in my opinion since you are less likely to jeopardize formation of the good scar tissue.

Contrary to popular belief, steroid injections in the nose at this point in the healing process can also effectively treat already established scar tissue (see case example below). In fact, I have used steroid shots in rhinoplasty patients who are years out from surgery and still see a nice improvement from the injections. It is all a matter of what steroid concentration you use and how much you put in. For instance, in mature, established scar tissue I will often opt to use a more moderate amount of K40 since it is much stronger solution. In the experienced hands of a rhinoplasty expert, steroid injections can be a great tool to further refine the nose even long after scar tissue has formed.

One of the potential complications of steroid shots in the nose is development of a depression in the area of the injection. Just as steroids can work to dissolve mature scar tissue, they can also cause normal soft tissue to dissolve away. This process where soft tissue shrinks down is also known as atrophy. This can occur if the steroid solution gets into the surrounding skin and fat and causes the soft tissues to atrophy. If this does occur, we normally wait several weeks and simply observe the tissues. In most cases, your body will rebound on its own and restore some, if not all, of the lost soft tissue volume. Fortunately, unwanted soft tissue atrophy following a steroid injection is not very common, especially if your rhinoplasty specialist takes a more conservative approach with choice of steroid concentration and volume. 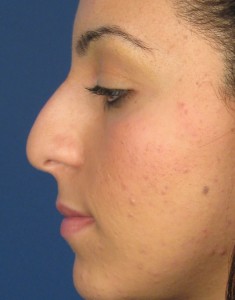 This patient is a great example of how steroid injections can be used to modify and optimize a rhinoplasty outcome. This young lady is one of my San Diego nose reshaping patients who had a dorsal hump deformity and tip ptosis. As you can see from her preoperative profile view, there is a convexity along her bridge and her tip is not as projected out as far as it should be. In addition, she had moderately thick nasal skin consistent with her ethnic background. Going into her rhinoplasty procedure, I knew the surgical goal was going to be reduction of her bridge height and elevation of her nasal tip. But I also had planned in my head that we were likely going to use postoperative steroid injections at some point to help her skin adapt to the new shape of her nose. Thicker ethnic nose skin like hers is not going to easily reshape on its own. In addition, there is a risk of her developing unwanted, excess scar tissue under the skin before it finishes shrinking down. As a rhinoplasty expert who does nasal reshaping surgery on a very regular basis, I could tell just from experience that this was an issue I needed to keep in mind during her healing process.

Indeed, 6 or so months into her recovery from nose reshaping surgery, she had signs of unwanted persistent edema and early scar tissue. Overall, she was doing fine but I could just tell by feeling her nasal skin that she might benefit from doing a series of steroid injections. As a rhinoplasty specialist, you can feel the nose and get a sense of how the healing is coming along. In this particular case, the soft tissue over the bridge felt a little ‘full’ as if there was some resistance when I pushed down lightly on the skin. When you look at her photos from 7 months out (see below), you can appreciate that there is a definite improvement in her overall nasal shape. But, as indicated by the red arrows, she still had a slightly high bridge and her tip was not as defined as we wanted. 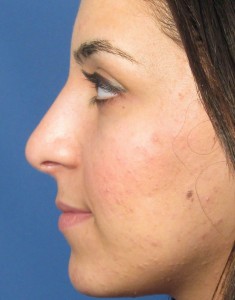 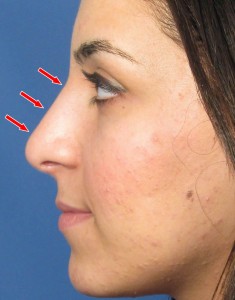 Because of the persistent edema and scar tissue development, we decided to begin doing steroid injections. After a series of conservative steroid injections underneath her nasal bridge skin, she began to notice even more obvious skin shrink wrapping. This included further refinements in terms of both the bridge and the supratip area (between her tip and bridge). As you can see from her before and after rhinoplasty photo series below, her nose now looks much better overall. 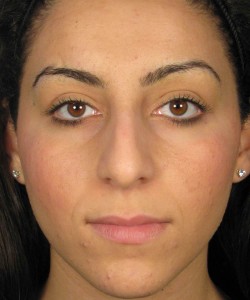 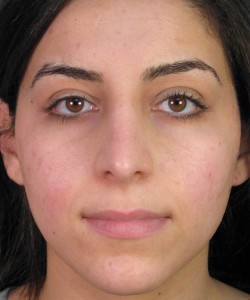 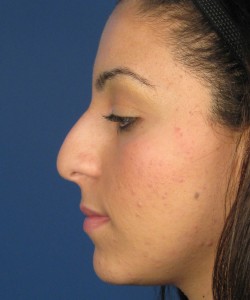 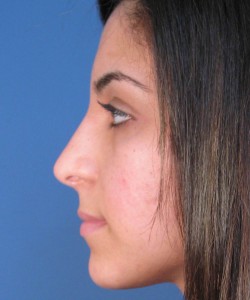 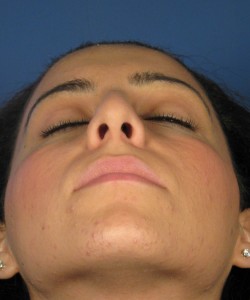 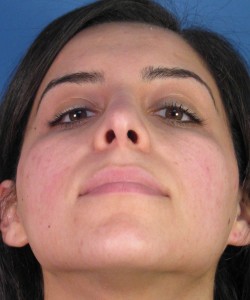