There are basically two different ways of performing a rhinoplasty surgery. One is referred to as an ‘open’ and the other as a ‘closed’ rhinoplasty. Open rhinoplasty just means that a cut is made in between the nostrils allowing the skin of the nose to be lifted up for exposure of the cartilage and bone. A closed, on the other hand, involves making all of the cuts inside of the nose so there is no external scarring. This is why more and more plastic surgeons are referring to their closed technique as a ‘scarless’ rhinoplasty.

As a marketing tool, being able to say you perform scarless rhinoplasty may be a huge selling point for patients who would prefer not to have any visible scarring from their nose job procedure. In fact, there are some plastic surgeons out there who advertise that they ONLY perform scarless rhinoplasty because they would never want to make an ‘unnecessary’ scar on someone’s face. The truth of the matter is that open rhinoplasty is still alive and well – and the resulting scar across the columella (in between the nostrils) actually heals quite nicely in a great majority of cases to the point where it is barely visible. But if you can avoid making a scar – and get the same great results from rhinoplasty surgery – then, by all means, why not consider the closed approach? 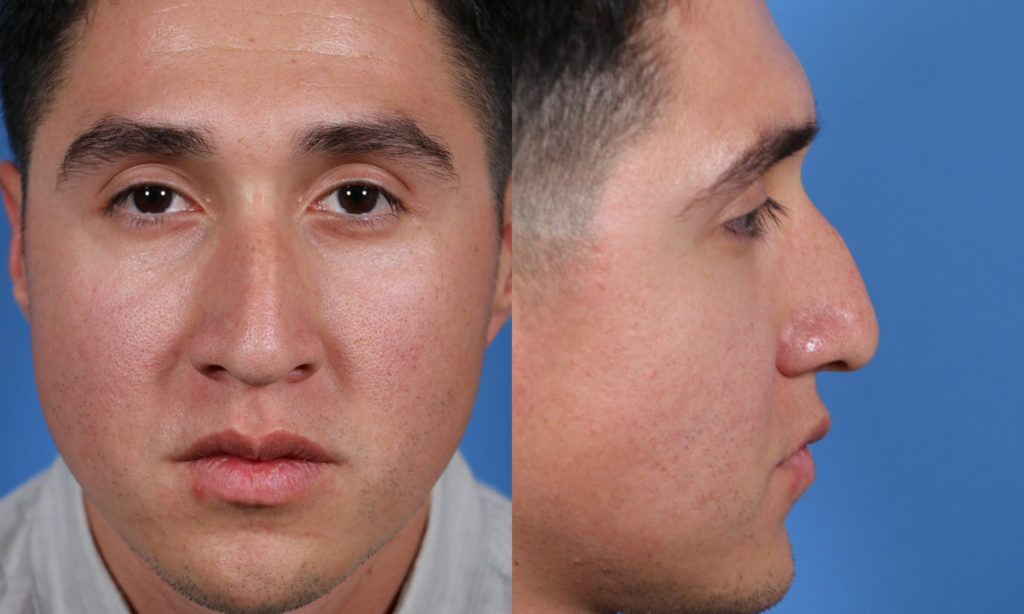 This is a great case example of scarless rhinoplasty performed on this male patient from San Diego.

He presented to our office with a main complaint of a larger dorsal hump, or bump on his nose. In addition, he was unhappy with how his nasal tip drooped down – particularly when he smiled. He was also noted to have crooked nose as seen from the front view where the nose leaned to the patient’s left side. This is actually a common triad of nasal deformities that we see in our office on a regular basis – a dorsal hump, droopy tip and crooked alignment.

Dr. Hilinski certainly recommended he undergo rhinoplasty surgery. But the big question was whether or not all of these issues could be addressed with a scarless rhinoplasty approach. In the end, that is precisely what Dr. Hilinski recommended based on his anatomical examination. 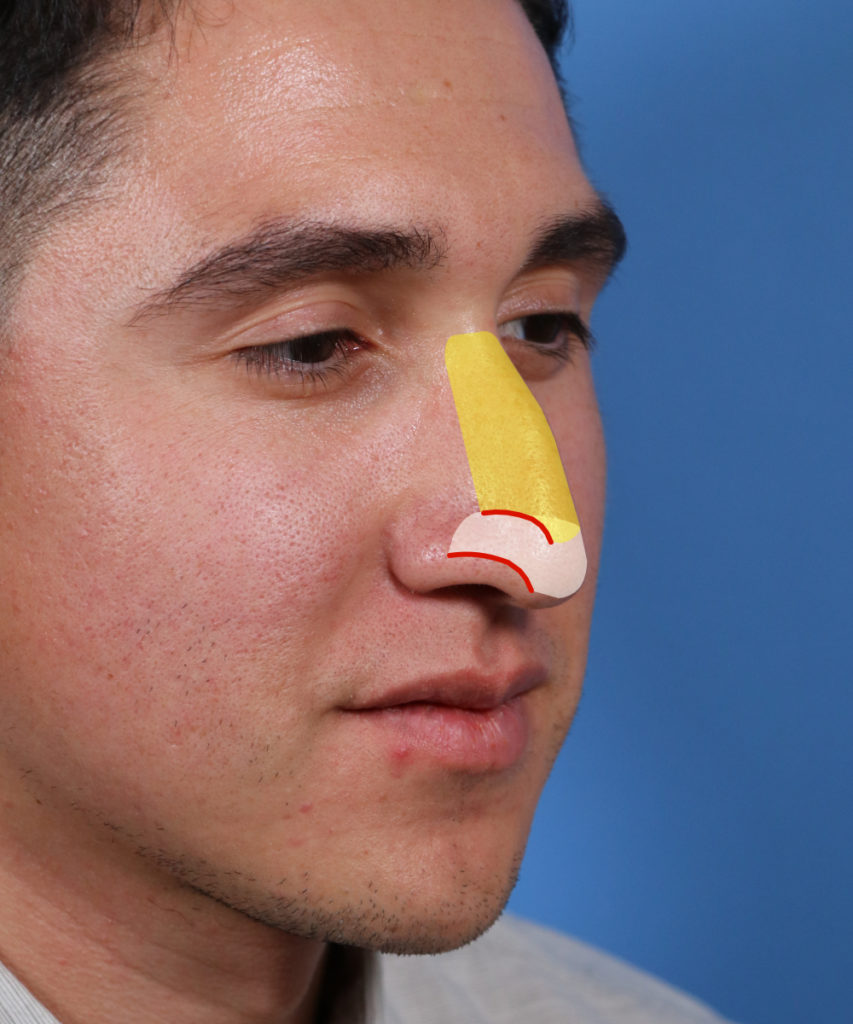 So how is scarless rhinoplasty performed? This is shown in the adjacent photo diagram where the red, curved lines correspond to incisions made on the inside of the nose. These incisions are made in strategic locations that allow Dr. Hilinski to have adequate exposure (visibility) of the cartilage and bone. In addition, these carefully placed internal cuts allow for access to certain areas of the nose, such as the bridge, that need reshaping.

The lower cut that is made along the inner lining of the nostril arch provides access to the nasal tip area (white shaded zone in the diagram). The upper cut is made in between two segments of cartilage (and is called an inter-cartilaginous incision) and provides easy access to the entire bridge (yellow shaded zone in the diagram). These different zones of dissection do communicate with one another underneath the skin, which helps to facilitate movement and relocation of the nasal framework.

In this particular case, Dr. Hilinski used the yellow shaded area to reduce the height of his bridge. This rhinoplasty maneuver is also referred to as nasal bridge reduction or dorsal hump reduction. Once the cartilage and bone were brought down to the desired height, the bones were then cut internally to allow for movement and reshaping. In this instance, the bones were realigned to help improve his overall symmetry as seen from the front view.

The nasal tip was then reshaped using what is called a nasal tip delivery maneuver in the world of rhinoplasty. This means that the cartilage, which forms the shape of the nasal tip, is pulled out through those internal incisions. Wait. What? Yes. The cartilage is actually pulled out through those cuts a sufficient distance so that they can be readily seen in the nostril opening. The cartilage is then sutured (stitched) to reshape the tip and/or trimmed to allow for improved definition. If needed, cartilage can also be taken from elsewhere inside of the nose (called a septoplasty) and used to graft the tip cartilages.

After the nasal cartilage and bone have been altered to the desired shape, the overlying skin is allowed to simply re-drape over the new framework. As the skin shrink wraps down onto the freshly redone, underlying skeleton, the shape of the nose becomes more manifest. The internal incisions, or cuts, are typically stitched up with an absorbable suture so that nothing has to be removed in the office in terms of stitching.

Here are the results of this patient’s scarless rhinoplasty surgery. As you can see right off, his alignment has been improved very nicely where his nose now sits more in the midline of his face. As you begin to turn his head, the oblique view starts to show just how much change was made in terms of the bridge height. Whereas he previously had an obvious dorsal hump, his nasal bridge is now much straighter. Yet, his bridge wasn’t taken down so much that Dr. Hilinski risked creation of any feminine features. In fact, when performing male rhinoplasty surgery, it is so important to maintain an adequate bridge height that keeps that face looking masculine and strong. As this patient turned to the side, you could really appreciate how his tip was lifted up to help correct the drooping deformity. In concert with his new bride height, his newly reshaped tip gives him a marked overall improvement. Not bad for a procedure that doesn’t create any external scarring, right? If you have considered rhinoplasty surgery and are looking for an expert plastic surgeon who has true experience in scarless rhinoplasty, don’t hesitate to contact San Diego’s best rhinoplasty surgeon, Dr. John Hilinski. 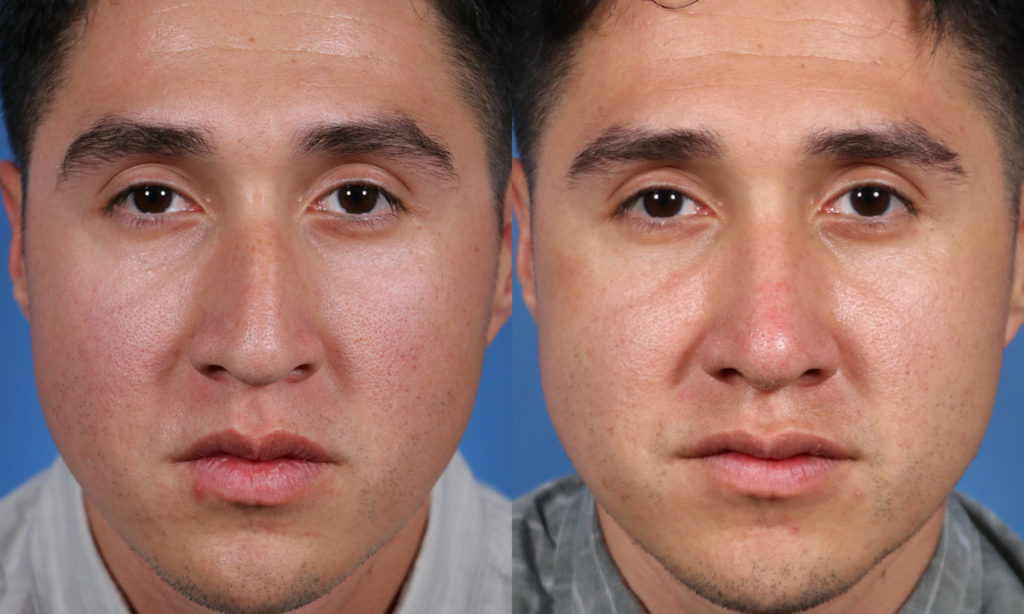 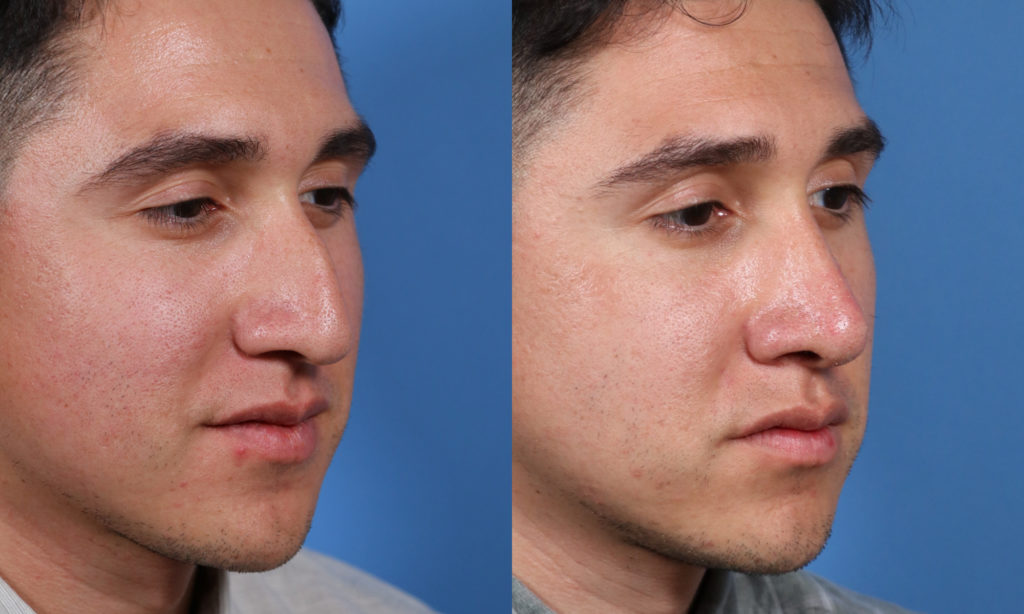 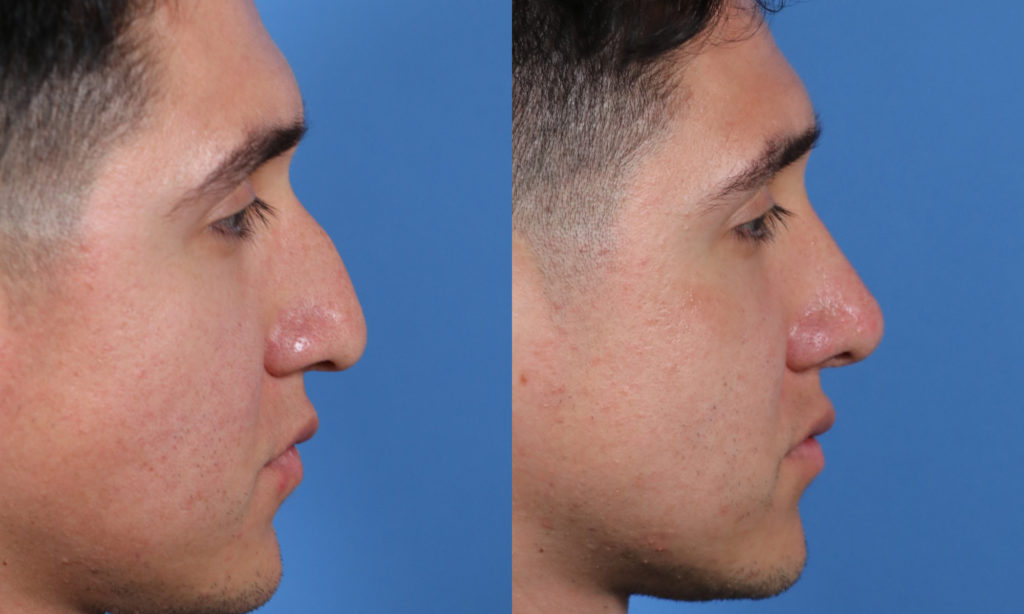