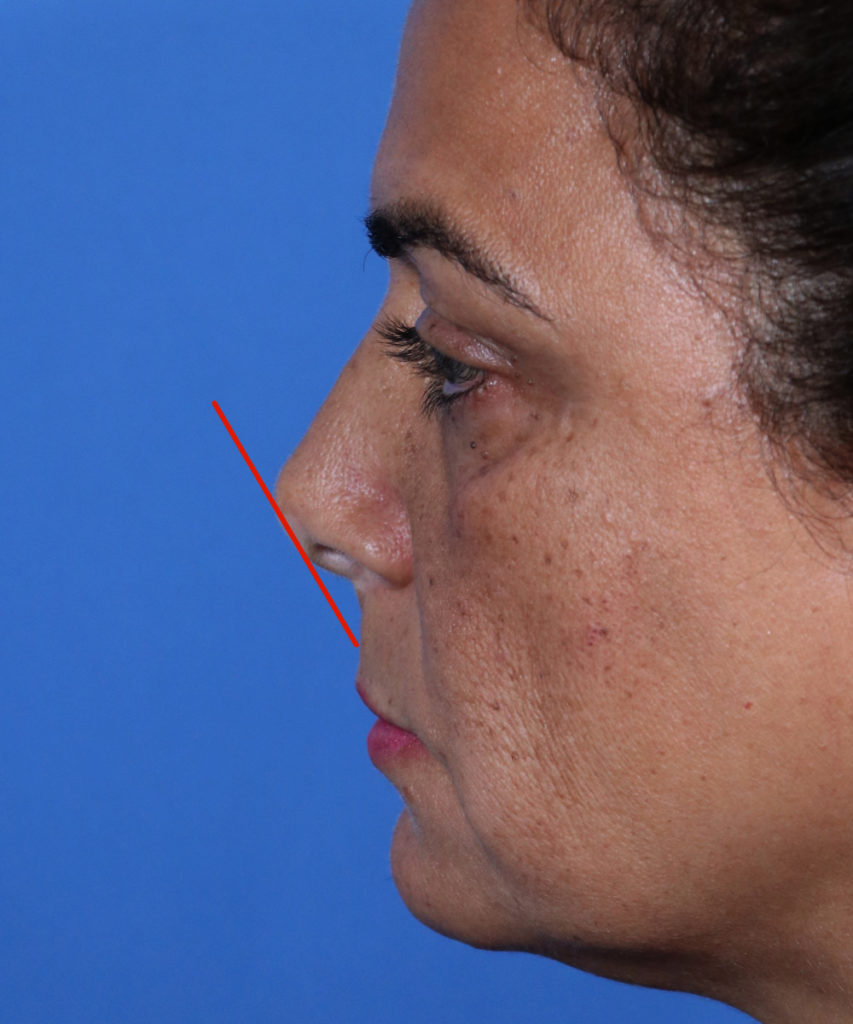 Here is a great example of how Dr. Hilinski can make you a new nasal tip. This female patient underwent prior rhinoplasty in Iran and was left with a nasal tip that was truncated. When we describe a tip as being truncated what we are referring to as shortening of the end of the nose. If you look at her profile view, you can appreciate how the tip of her nose appears cut off. This is indicated by the redline that shows where her nasal tip stops. Because the nose appears too short, we describe this as being truncated.

When you look at a nose like this from the front view, it usually will appear wider than desired. The nasal tip will also appear less defined. This is because there is a relative lack of structure and form to the tip region.

Why does something like this occur? Usually this is a result of excess manipulation of the lower lateral cartilages of the nasal tip. When these cartilages are repositioned and/or reshaped incorrectly, the tip of the nose will move backward – leaving the patient with a truncated tip.

So how does Dr. Hilinski go about fixing a shortened nose such as this one? In this particular case, he utilized an open rhinoplasty approach where the skin was lifted off of the nasal framework using an access incision made in between the nostrils. Once this was done, he then harvested some septal cartilage that she still had left inside of the nose and combined this with some ear cartilage. He needed this amount of cartilage in order to actually lengthen her nose by making her a new nasal tip. 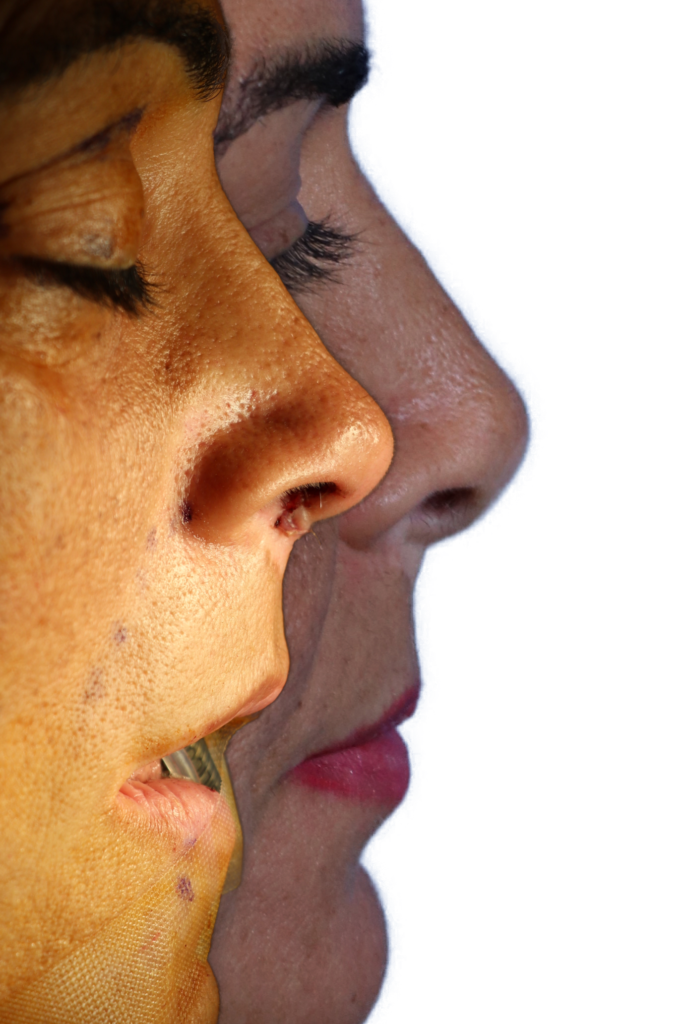 In order to establish proper support for her new nasal tip, Dr. Hilinski first placed what is called a caudal septal extension graft. This is a piece of cartilage that was sewn to her native septum. It is strategically shaped and positioned so that it juts out into the area where she was previously truncated. This would serve as a sufficiently strong support mechanism for her new nasal tip. The paired segments of cartilage that usually form the nasal tip shape (called the lower lateral cartilages) were then attached to the caudal septal extension graft. All of these changes occur in a 1-2 centimeter area of the nose. But as we always preach, rhinoplasty and revision rhinoplasty are all about millimeters of detailed alterations.

Here in the adjacent photo comparison you can see just how much the tip of her nose changed on the operating room table. What you can readily appreciate is just how much length was added to her truncated nasal tip. This is all due to the caudal septal extension graft that was added to her nose to extend the tip outward. Whereas her tip was too short for her nose, after surgery it is now positioned just right to give it the much needed length and projection it was lacking.

And here are her actual before and after tip lengthening photos. From all angles you can see just how much better she looks after fixing the short nose caused by her prior rhinoplasty. On her front view, you can see that she now has a nasal tip! There is also more symmetry seen from this angle since Dr. Hilinski was able to build her a new nasal tip. As you turn her head to the side, the oblique angle is even better at showing how much tip lengthening and projection was accomplished with the revision rhinoplasty. And as you look at her true side view, you can see that her cosmetic improvement is maintained and consistent with the results seen on the operating room table. Overall, her nose now has an entirely new tip with greatly enhanced cosmetic results. 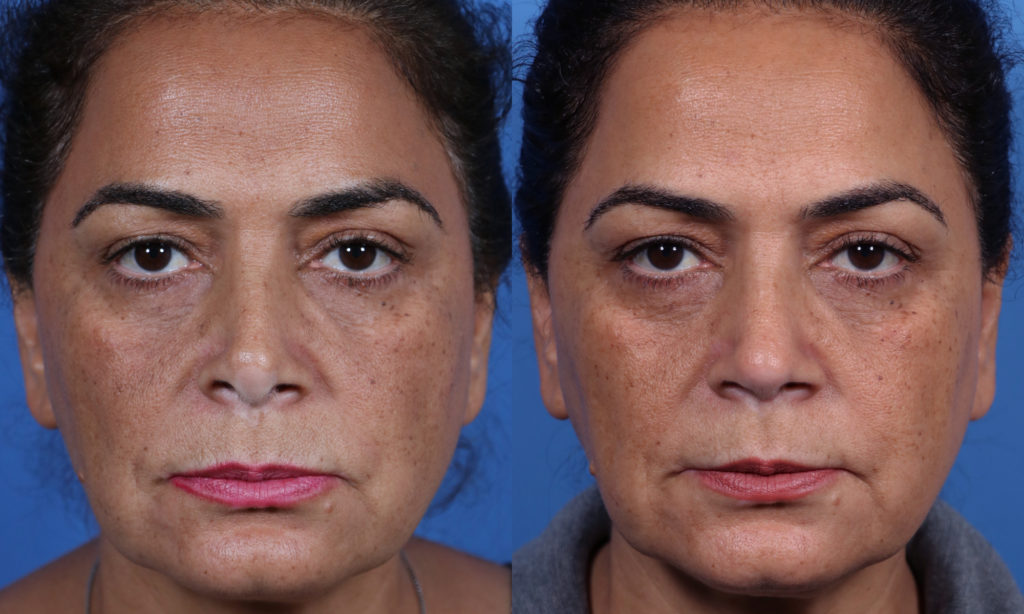 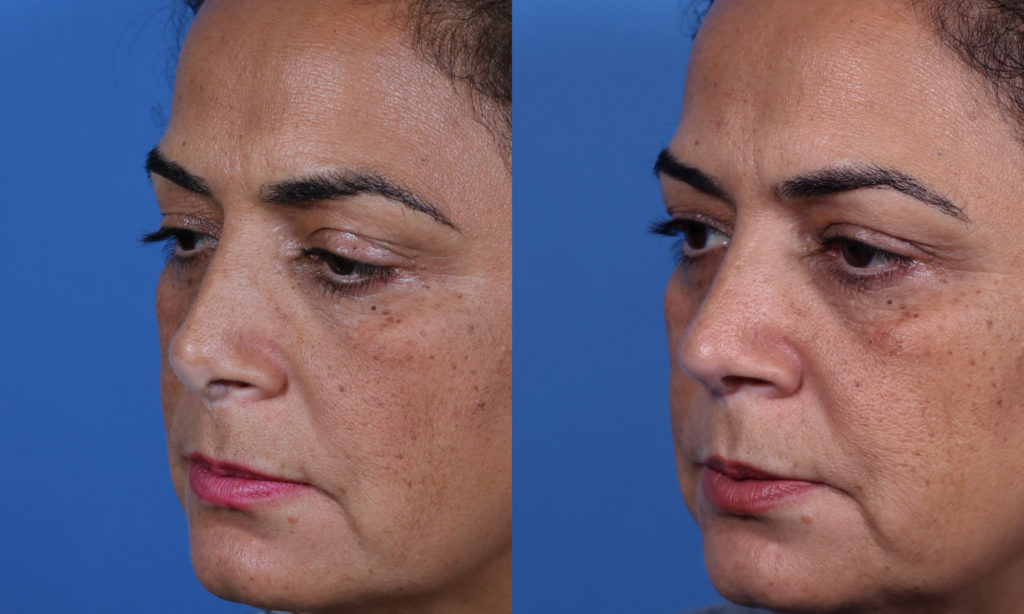 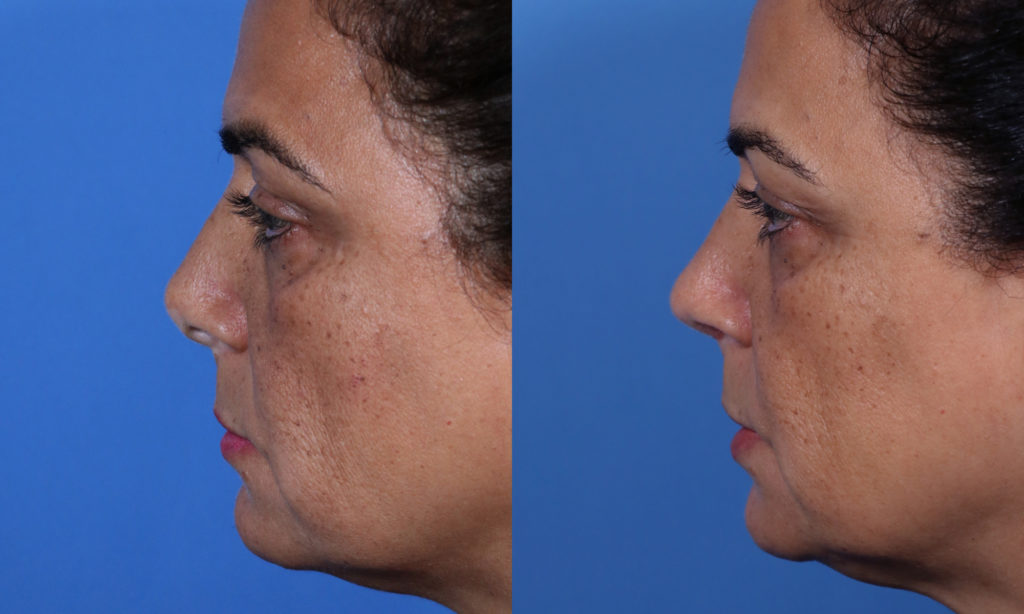