We have had several patients consulting with us over the past few months for chin augmentation with placement of an implant. Many of these patients were seeking an increase in projection to achieve more definition along the jawline and upper neck. In several of these patients, it was noted that tightening of the platysma muscle would also prove beneficial in their surgical outcome so I decided to post a quick blog regarding this combination procedure. The following case example highlights some of the more pertinent points. This patient from San Diego desired improved definition of the jawline with a stronger looking chin. We consulted with him and decided that a chin implant would help him achieve this type of change. However, during consultation I also pointed that his neck was poorly defined and might benefit from additional work beyond just a chin implant. We decided that his neck could also be contoured by tightening the muscle just underneath the chin, called the platysma muscle. The procedure, termed a platysmaplasty, would help provide him a longer horizontal neck line, which would also further improve definition of his jaw. The photo on the left below shows his profile view before any surgery. The next photo over shows his actual postoperative result following combined chin implant and platysmaplasty. As you can see in the diagrammed photo below, the chin implant was able to provide further definition as indicated by everything in front of the red curved line (his original chin contour traced out). Had we just performed the chin implant, this would have been the only improvement realized. The platysmaplasty portion of the procedure was able to eradicate the excess fullness under the chin as indicated by everything shadowed behind the blue outline. Had we only performed the platysmaplasty, this is the only improvement that would have been seen. Using the diagram for comparison, one can easily appreciate how combining the procedures can dramatically increase the results. If you are considering chin augmentation with a chin implant and think you might benefit from this type of combined procedure, give our office a call to schedule a complimentary consultation. We look forward to meeting you in person. Sincerely, Dr. Hilinski 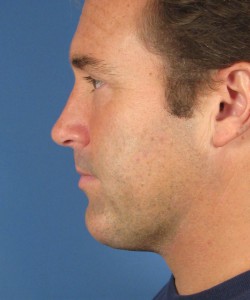 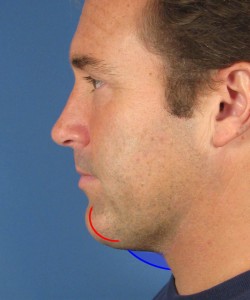