Ethnic rhinoplasty is a particularly specialized form of nasal reshaping that takes into account the fact that different ethnicities demand different approaches when it comes to cosmetic nose surgery. Unfortunately, there are still many rhinoplasty surgeons practicing out there who simply perform the same type of rhinoplasty procedure whether they are treating an ethnic patient or not. In many of these cases, patients are left unhappy because their new nose is inconsistent and out of balance with their remaining ethnic facial features. In fact, a large part of my revision rhinoplasty practice focuses on repairing ethnic rhinoplasty patients whose noses require further reshaping to be appear more consistent with their ethnicity. This includes Asian noses, African-American noses, Middle Eastern noses and others. With my facial plastic surgery practice based here in San Diego, we have quite a variety of ethnic rhinoplasty patients and, thus, fairly extensive experience in this niche rhinoplasty population. The case example below reminded me to post a quick blog to highlight some of the nuances when it comes to ethnic rhinoplasty. This particular ethnic rhinoplasty patient from San Diego presented to our office complaining that her nose was too big for face. She specifically noted that her bridge was too high, her tip too wide and desired an overall more refined look. During her consultation, we discussed how her ethnic facial features would guide much of what we were going to do with her nose. This was a great example of ethnic rhinoplasty where an attempt to reshape her nose in a more aggressive fashion would result in something that simply did not fit her face. Instead, I suggested a number of things that would improve the appearance of her nose while maintaining ethnic consistency. She underwent an ethnic rhinoplasty procedure well over a year ago. During her procedure we reduced her bridge height as indicated by the red rectangle below. Once this was done, we narrowed her nasal bones to give a more narrow look from the front. At the same time, we elevated the portion of her bridge in between the eyes, called the radix. This was done with what we term is a radix graft (see blue ellipse along the upper bridge), which is cartilage taken from her own body that is grafted to this area. What this did was raise her bridge in this select area while making her eyes look slightly closer together and more open. We also narrowed her tip (see red ellipses indicating reduction of volume) to create a more feminine look while rotating the tip upward slightly. Altogether, you can clearly see that her nose looks different following ethnic rhinoplasty. However, her new nose is very consistent with her surrounding facial features and just seems to fit her face – almost as if she could have been born with this exact nose. Sure, more could possibly have been done to her nose, but with ethnic rhinoplasty I think you are much better off doing a little here and a little there without risking a surgically altered appearance. 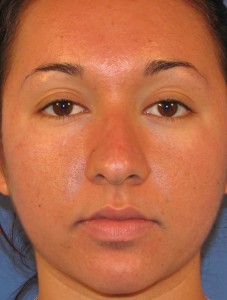 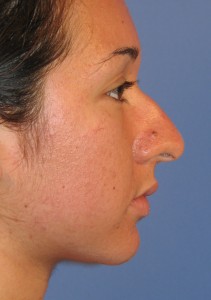 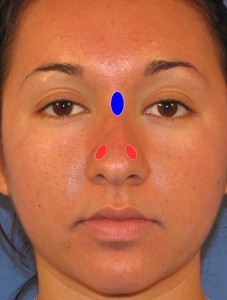 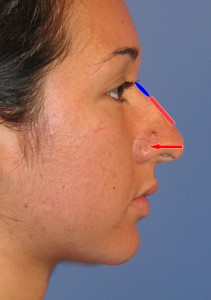 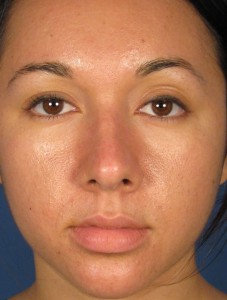