Am I Too Old To Have A Facelift Procedure In My 60s?

The answer is hopefully not! As facial plastic surgeons, we get asked this question all the time from patients considering facelift surgery in their 60s. The reality is that some patients are going to be considered great candidates to have this type of facial rejuvenation procedure while others might not be such good candidates. Much of this depends on how your skin has aged over the years. If your skin still has reasonable elasticity (a rubber band like quality where your skin snaps back into position when pulled or pinched), then you are more likely to be considered a good candidate for a facelift, or face lift, procedure. 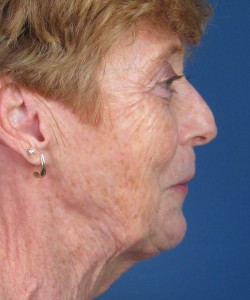 The adjacent photo of one of my San Diego patients who wanted a facelift is a great example of this exact topic. This very pleasant lady consulted with us regarding her lower face and upper neck region. She wanted to look more refreshed and rested. On examination of her face and neck, she was found to have some excess skin but fairly good elasticity. Meaning, when I pinched her skin slightly, it rebounded back into position more readily than many facelift candidates her age. We discussed in detail her option to undergo a rhytidectomy procedure – which is the technical term for a facelift and necklift procedure. Although she was in her 60s and her skin wasn’t like some facelift patients in their 40s or 50s, she was still considered a good candidate to have this type of facial rejuvenation procedure performed.

San Diego Before and After Facelift Photos

Below are her before and after photos following the facelift procedure. As you can see, she still looks like herself, which is typically the goal when performing facial rejuvenation surgery like this. What you do see, however, is that she appears more rested and youthful, especially on her profile (or side) view where her sagging jawline and neckline were most visible before the facelift. You also get a good appreciation of how well the facelift incisions can heal in your typical case like this. Her facelift incisions are fairly well hidden just in front of the ear where it junctions with the face. Note how her jawline is now more defined and her neck no longer sags down as it did before the face lift. So if you are in your 60s and considering having a facelift procedure, come by our San Diego office for a complimentary plastic surgery consultation to see if you are a good candidate for this type of facial rejuvenation procedure. Don’t let your age determine whether or not a facelift procedure is right for you! 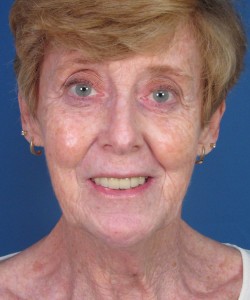 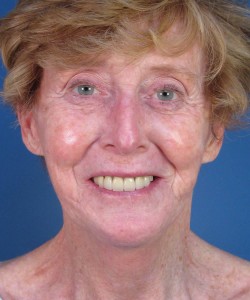 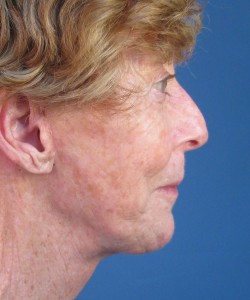