Traditionally, eyelid lifts were accomplished by surgical removal of the excess skin – commonly referred to as a blepharoplasty (pronounced bleff-r-o-plasty). I the past several years, plasma energy has been discovered to help rejuvenate the upper eyelid using a non-surgical technique that tightens the excess skin. 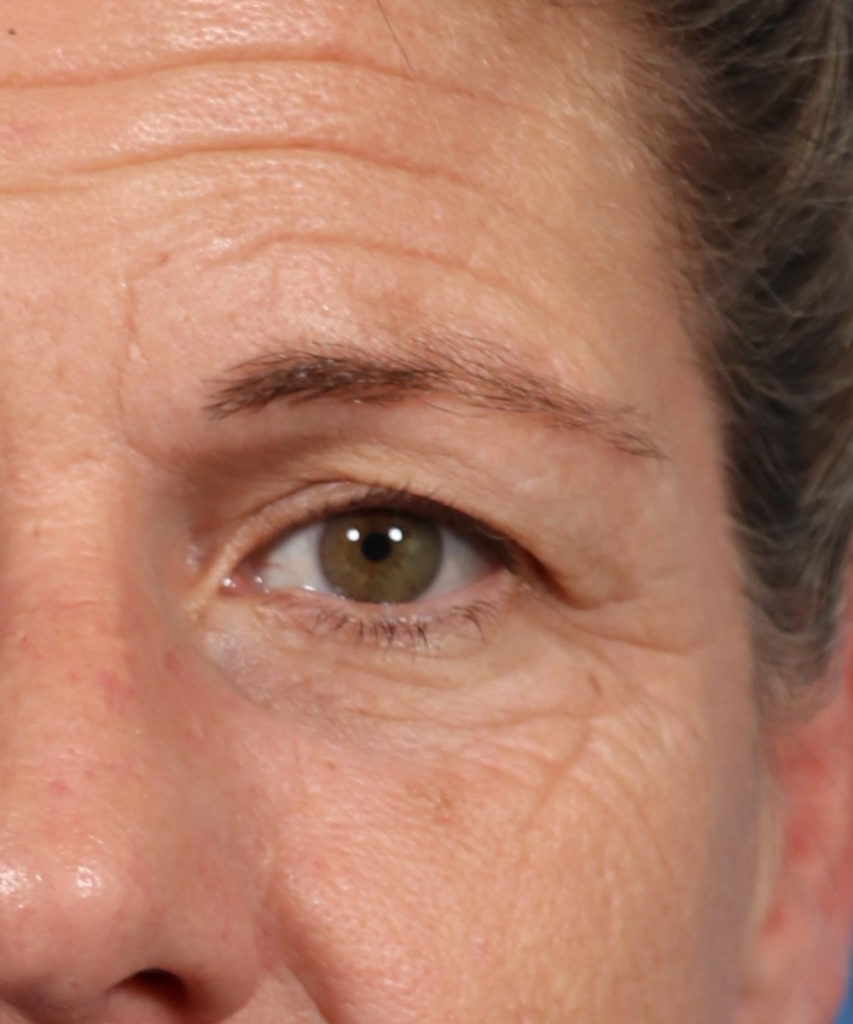 Here is a fantastic case example of a non-surgical blepharoplasty that utilized Renuvion’s plasma energy device, called J Plasma, to rejuvenate the eyelid skin. This middle-aged female patient had obvious signs of aging and sun damage that affected her face. More specifically regarding her upper eyelids, her skin had  lost quite a bit of elasticity, which resulted in excess bunching of the skin across the lid. This can be seen quite readily in the adjacent photo taken prior to her Renuvion treatment.

Just like so many blepharoplasty patients, the upper eyelid skin had become so loose and redundant that it literally began to drape over her eyelashes. In fact, the upper eyelid had aged so much that you could no longer even see the natural eyelid crease along the lateral (outer) segment. If you look closer toward the nose along the medial eyelid, you can see her natural eyelid crease peeking out. But laterally, the excess, weighted upper eyelid skin began to hang over the natural crease. In doing so, it makes the eyelid region look prematurely aged and tired. This is precisely the anatomical issue that prompts so many patients to seek out cosmetic eyelid surgery to help them look more rested and youthful.

So instead of cutting out the excess upper eyelid skin, some cutting-edge cosmetic physicians are now using plasma energy to tighten the tissue. Plasma energy has been used in medicine for quite a while, but only recently has it been harnessed to be used more predictably for cosmetic enhancement of the face and neck region. When used for non-surgical blepharoplasty, plasma energy is employed without making an incisions or cuts along the upper eyelid. This saves you from having any scars as a result of cutting the skin open. The plasma energy wand is simply passed over the upper eyelid skin without even touching the surface. The plasma arc of the Renuvion device interacts with the skin of the eyelid to tighten the underlying tissue. Plasma energy does this so effectively that you can literally watch the upper eyelid contract, or shrink down, in front of your own eyes.

Can you get a result like this from using the newer plasma pens, such as the Louise Walsh Plasma Pen? Sort of, but not really. These plasma pens are another great alternative for non-surgical blepharoplasty, but they just aren’t as strong as the Renuvion plasma device when it comes to tightening skin around the eyelid.

Here is a quick series of photos that show how this patient responded to the Renuvion eyelid plasma treatment. The photo on the left is her before any treatment was done. In the middle is her healing from the Renuvion skin resurfacing procedure, which included other areas of the face obviously. But if you look, in particular, at her upper eyelid you can see that within days of having the procedure the skin is already showing signs of marked tightening and lifting. And then on the right is her appearance about 6-8 weeks out from the plasma eyelid lift. At this point in the healing, it is even more obvious in terms of how much improvement there is in the upper eyelid contour. Her skin has been beautifully tightened and lifted to help reveal the natural eyelid crease that was hiding under the upper lid for all these years. When you compare her before and after photos, they rival any traditional upper eyelid blepharoplasty result – just without having to make a cut or incision.

If you have excess upper eyelid skin and are looking for a non-surgical option to blepharoplasty, call our office today to discuss options with San Diego’s leading plasma Renuvion treatment specialist, Dr. John Hilinski.