| Blog | Rhinoplasty For Moderately Complex Asymmetry Of The Nose

Rhinoplasty For Moderately Complex Asymmetry Of The Nose

This particular patient was a great example of how we utilize spreader grafting technique as part of a nasal reshaping process. This pleasant male patient presented with difficulty breathing through his nose as well as cosmetic concerns regarding the appearance of his nose. On nasal examination he was found to have a fairly complex nose in terms of anatomical problems. As you can see in the photo diagrams below, his nasal bridge was fairly displaced but in a somewhat unique fashion. The upper portion of his bridge was collapsed inward (as shown by the blue arrow) on his right side and pushed out on his left side (as shown by the upper end of the white line). The lower portion of his nose was more displaced to his right side. The end result was a nose that looked as if it ran obliquely across the middle of his face. In addition, he had a slight bump on his bridge immediately above a depression involving the left side of his bridge. The curvilinear blue line in the diagram below follows the outline of his nose as seen on this oblique view highlighting just how misaligned his nasal bridge really was preoperatively. Although this is not the most dramatic crooked nose deformity that you might have seen, this particular nose encompassed a number of fairly complicated deformities that needed to be addressed concurrently. 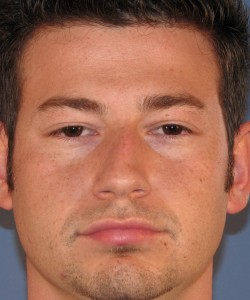 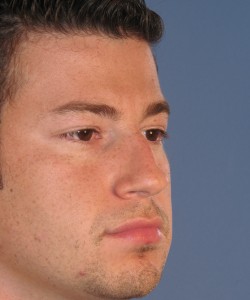 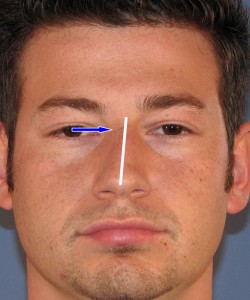 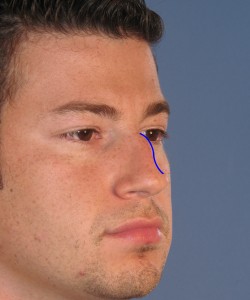 We were able to perform a combined functional and cosmetic rhinoplasty procedure using an open rhinoplasty approach. As part of the corrective process in reshaping his nose, we reduced the upper portion of his bridge where the bump was present. We also performed osteotomies to fracture the nasal bones and reposition them. However, this only resulted in correction of the upper 1/3 of his nasal bridge. At the same time, we had to place a spreader graft on his left side in order to rebuild the middle vault region where he was noted to have an obvious depression on the oblique view referenced above. Not only did this spreader graft help elevate and widen his nose in this area (see his oblique after photo showing a nice straight nasal outline), it also helped improve his nasal function. Coincident with these rhinoplasty maneuvers we reduced his right tip volume to give him a more symmetric frontal view. Combined, these various rhinoplasty techniques made for a fairly challenging and complex nasal reshaping process. Fortunately, we were able to provide him a nice overall improvement in nasal shape and function. We did end up performing a secondary refinement procedure to give him even more improvement with the end result shown below in the photo series. One can appreciate the new nasal shape as one that is a clear improvement over his preoperative nose. In addition, he still looks quite natural while maintaining a nice masculine overall appearance. 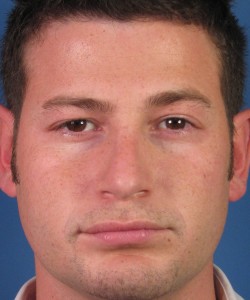 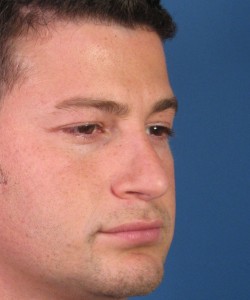 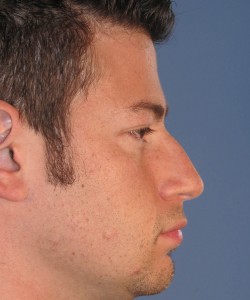 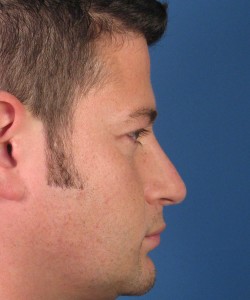