This is a great example of nasal tip rhinoplasty, or just tip rhinoplasty for short. This is a young female patient who was referred to our San Diego office for rhinoplasty by a friend of hers who was happy with a cosmetic rhinoplasty done by us years ago. This patient was most concerned about her nasal tip. In fact, she was unhappy with the rounded, or bulbous, appearance to her nasal tip. She wanted to undergo cosmetic reshaping of the nose to really address this one main issue with the tip. She is a very attractive young lady who some would say doesn’t even need to have a nose job. However, her wide nasal tip did detract a little from her overall facial features. And, more importantly, she was seeking to have a rhinoplasty not to please others, but to make herself more confident and content. There are few better reasons to consider having cosmetic rhinoplasty surgery. 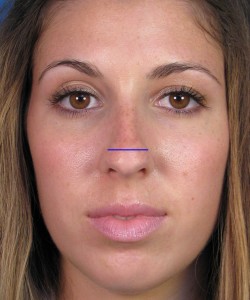 As you can see in her before rhinoplasty photo, the tip of her nose is moderately wide and is disproportionately large for her surrounding facial features. This was visually demonstrated in her photo by the blue horizontal line that depicts the true width of her nasal tip. Her bridge is actually quite nice in terms of width and shadowing. And as noted before, she is a very pretty young lady. So her nasal tip was the only real concern on my evaluation of her face.

Based on her examination and desires, I recommended she undergo a cosmetic tip rhinoplasty procedure to simply try and narrow the nasal tip. Now in situations like this, my recommendation is to err on the side of being conservative with the nasal reshaping process. After all, she has an attractive face with the exception of the tip of her nose. Just a little bit of nose reshaping is all that is needed to create more harmony and balance with her face. I elected to perform her nose job through a closed rhinoplasty approach so that we limited incisions and scarring. The nose reshaping surgery involved a delivery technique, which is a rhinoplasty term used to describe how the tip cartilage is exposed to provide optimal visualization when performing a closed rhinoplasty. A conservative cephalic trim maneuver was performed – meaning I trimmed down the bulbous tip cartilage to create a thinner tip overall. I also repositioned the tip cartilage to give a more refined look.

Before & After Tip Rhinoplasty

Here are her before and after photographs following her tip rhinoplasty procedure performed at our San Diego, CA office based surgery center. As you can appreciate, she still very much looks like herself. But her nasal tip is now more defined and looks more appropriate for her face. The nose is now more balanced and in harmony with her eyes and cheeks – the essence and goal of the best rhinoplasty surgery results. As shown by the white arrows, her tip has now been brought inward on both sides. And you can compare just how much narrower the nasal tip now is when looking at how wide it used to be (as indicated by the blue horizontal line from her preoperative nose). I hope this is a good educational example of what is possible with carefully performed rhinoplasty surgery. If you have issues with a wide or bulbous nasal tip and are considering cosmetic nose reshaping, or nose job, contact our office today for a formal rhinoplasty consultation. As a rhinoplasty specialist, I think you will appreciate the difference between a facial plastic surgery nose expert and a general plastic surgeon. We look forward to hearing from you in the future. 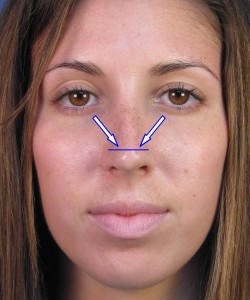 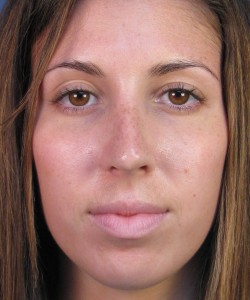