| Blog | Subtle Deprojection of the Nasal Tip in Rhinoplasty

Subtle Deprojection of the Nasal Tip in Rhinoplasty

As a San Diego rhinoplasty specialist, I see quite a few cosmetic nose reshaping patients who mistakenly ask to have their nose shortened. What they really are asking is to have the nose ‘deprojected’ or brought closer to the face. Projection of the nose refers to how far the nose sticks out from the face. To gain a better visual understanding of this, please refer to our San Diego Rhinoplasty Tutorial section on nasal analysis. In cases where the nose projects out too far, we can reshape the nasal tip to bring it in better balance with the surrounding facial features. This is what we call deprojection since we are decreasing the projection of the tip. This can be done with or without changing the rotation of the nasal tip (which does impact whether or not the nose is shortened or lengthened). To clarify this concept of deprojection of the nasal tip, I have provided the following case example of a San Diego reconstructive rhinoplasty patient of mine. 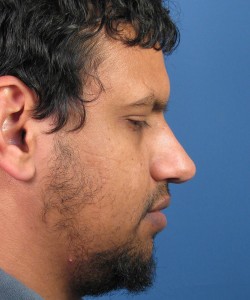 This rhinoplasty patient from San Diego desired reconstructive nose surgery. As you can see in this preoperative profile photo, his nasal tip was overly projected off of the face. In other words, the nasal tip looks like it stuck out too far. In many cases, this can be a very subtle finding in a rhinoplasty patient. In this particular rhinoplasty candidate, it was not grossly over projected but nonetheless still visible and bothersome. This patient also had slight under-rotation of the tip – meaning the nasal tip drooped down just a bit.

As part of this patient’s reconstructive nose surgery, we deprojected his nose to bring the tip closer to the face. We also rotated the nasal tip slightly (shortening the nose), but the deprojection is what is most appreciable in terms of the nose reshaping. This can be seen in the adjacent rhinoplasty photos. On the left you can see by the colored lines the projected position of the nasal tip in two different locations before the rhinoplasty. On the right is the new position of the nasal tip with the same two colored lines showing the subtle improvements that were made. As you can appreciate, not every nose has to undergo dramatic transformation or significant reshaping in order to realize a more esthetically pleasing result. 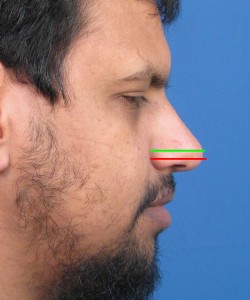 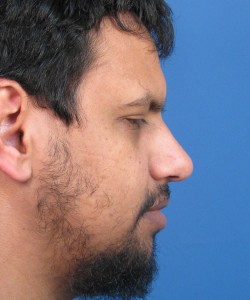