Anatomy of a Female Facelift Necklift Patient in San Diego

This is a very pleasant lady who underwent a lower facelift and upper necklift procedure in our San Diego facial plastic surgery office. She presented to our demonstrating excess sagging neck skin. As with many facelift and necklift candidates, there was a notable amount of excess fatty tissue underneath the skin that contributed to the problem. In these patients, you cannot, unfortunately, just liposuction the neck. If you do so and remove the unwanted extra fat, the overlying skin is likely to just sag down further. This is because the skin has lost much of its elasticity, or rubber band like quality, and won’t just shrink wrap upward. As a result, you are forced to remove the extra fatty tissue but then have to elevate or lift the face and neck skin.

Below are her photos before having the facelift and necklift procedure. As you can see by the white arrows, she has a moderate amount of sagging neck skin that was most bothersome to her. Behind the skin, anatomically, was a fairly thick layer of excess fat that was contributed to the heaviness through her neck region. She actually did not have much in the way platysma (the muscle layer that courses from the clavicle across the neck to the jawline) banding, which is where the muscle hangs down and causes the appearance of a thick vertical cord along the neck. Based on these preoperative photos, I suggested a procedure to liposuction the neck and lift the lower face/upper neck skin. 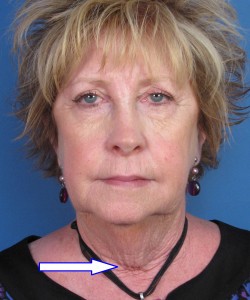 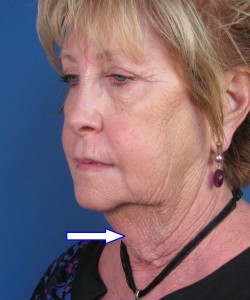 The facelift and necklift surgery was performed under a general anesthetic in the outpatient setting. After liposuctioning to thin out the neck line, I performed a standard facelift procedure. As in nearly all facelift surgeries, this involved tightening and lifting the SMAS layer to provide a strong, sustained elevation of the facial skin and soft tissue. On her lateral view (see diagrammed photo), you can see the area of the neck that we really tried to target with the combined facelift and necklift. If we were able to lift this portion of her neck and jawline, we would essentially be repositioning her lower face and upper neck skin to mimic their position a decade earlier. 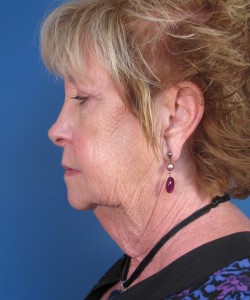 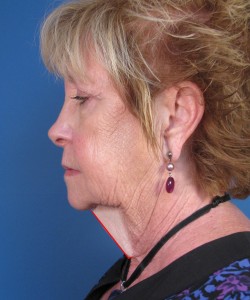 Here are this patient’s before and after facelift/necklift surgery results. As you can appreciate, she has a fairly significant improvement in terms of her upper neck and lower face contour. We were successful in lifting her neck skin and improving her jawline to provide her with more definition and less heaviness. Overall, she looks quite natural and more rested. As you can also see, her ears are still in their native position without undesirable pulling of the ear lobe – a common concern in facelift candidates. If you are considering a lower facelift and upper necklift, we hope this case example provides you with some visual confirmation of what might be possible with facial plastic surgery by The Hilinski Clinic. 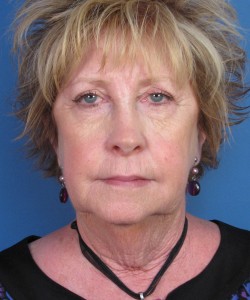 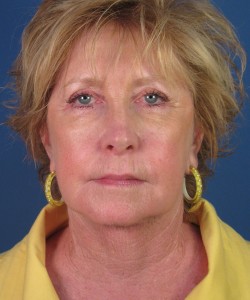 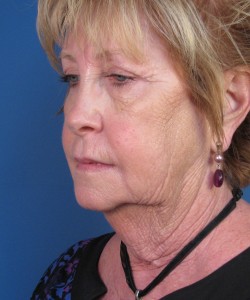 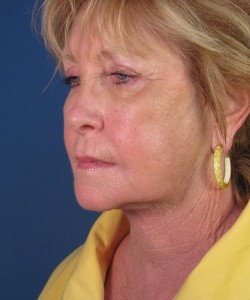 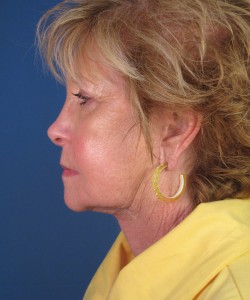