Recently, the American Society for Aesthetic Plastic Surgery (ASAPS) released statistics revealing that 30,358 otoplasty procedures were performed across the United States in 2012, making ear surgery the 10th most popular cosmetic surgery performed last year. In light of the procedure’s popularity, we sat down with our double-board-certified facial plastic surgeon, Dr. John Hilinski, to learn a bit more about cosmetic ear surgery at our San Diego facial plastic surgery practice. Below are Dr. Hilinski’s responses to some frequently asked questions regarding otoplasty.

Question: What is the main benefit of otoplasty?

Dr. Hilinski: The main benefit is that patients who are born with poorly developed, overly prominent ears can achieve a more natural appearance with less undesired attention being drawn to their ears. This type of cosmetic ear surgery is considered a permanent correction to their congenital abnormality.

Q: Who is a good candidate for otoplasty?

DH: The best candidates for otoplasty, or ear pinning surgery, are patients who have overly prominent or excessively large ears and wish to have them reshaped to appear more proportionate to their overall facial features. These patients typically have ears that stick out too far from the side of that head. For instance, one of the most prominent features of a poorly developed ear is the fact the surface of the ear can be easily seen when looking directly at the patient. Normally, a majority of the ear surface cannot be visualized when seen from the frontal angle. If the ear is not fully developed, it does not have an opportunity to fold in closer to the head. Consequently, it remains further out. 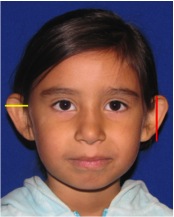 In the photo to the left, this underdevelopment is represented by the yellow line indicating how the ear nearly sticks out at a 90 degree angle from the plane of the head. In many cases, this is because the conchal bowl, the cup in the center of the ear, is much larger than average. Another common feature of a poorly developed ear is a much flatter surface. The normal, well-developed ear has a number of undulations and creases that collectively form a natural contour. When the ear is absent of these hills and valleys, it looks flat and underdeveloped. This is usually from a poorly developed antihelix, which is the long ridge naturally present in the normal ear. Other frequent findings in otoplasty candidates include a taller than normal ear – as shown by the red line in the adjacent photo – as well as a lobule, the fleshy bottom portion of the ear, that sticks out too far.

Q: Are there any age restrictions for ear pinning surgery?

DH: It is recommended that surgeons wait until the ear has stopped growing before performing otoplasty surgery. In most patients, this is around age five to six years old. Anytime after this period, patients can undergo otoplasty surgery without any significant concerns about future ear growth complicating matters. It also just so happens that patients begin to start their schooling around five to six years of age, and we all know how mean other children can be, so to a certain extent, getting the ears pinned back and corrected before children start the schooling process to prevent teasing can be a huge advantage psychologically.

As far as an upper age limit, there really is not one when it comes to otoplasty surgery. Usually patients who go 40 to 50 years with overly prominent ears are not going to entertain the idea of cosmetic surgery given the fact they are typically accepting of their appearance by this age. However, there are certainly many exceptions to this rule. For example, just last year I performed otoplasty surgery on a 72 year old male who flew out from Hawaii to have me perform his ear pinning surgery!

Q: How do you perform an otoplasty procedure?

DH: During otoplasty surgery, the abnormal features of the ear are sequentially addressed until a more natural looking ear has been achieved. In my chosen technique, I use incisions that are completely hidden behind the ear, near where it attaches to the surface of the scalp. In this manner, I can hide the scars from direct view. Some of the skin considered excessive is removed, and the underlying cartilage is then reshaped. This usually involves removing some of the excess cartilage first. Once the framework of the overly prominent ear has been weakened, it can be reduced in size and shape. The ear is brought closer to the head using a series of sutures or stitches. The flat portion of the ear is then reshaped to create a natural-looking antihelix ridge. Finally, the lobule is then brought closer to the head as necessary.

Q: How long does the procedure typically take to complete?

DH: It normally takes me one to two hours to perform cosmetic ear pinning surgery. The good news is that young adults and older patients can have it done under just oral sedation with something like Ambien. Younger patients, and those adults who are more anxious, typically have otoplasty done while under a deeper IV sedation anesthesia.

Q: What makes your otoplasty technique different from others?

DH: My technique involves making incisions that are contained entirely behind the ear so that scarring is not visible. There are still many plastic surgeons in 2013 who continue to make incisions, and scars, on the front side of the ear, which continues to perplex me. I have one of the busiest otoplasty practices in all of San Diego and haven’t had to make an incision on the front of the ear yet to accomplish the desired goals for my standard otoplasty patients.