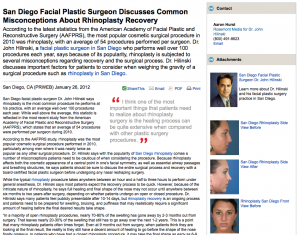 According to the latest statistics from the American Academy of Facial Plastic and Reconstructive Surgery (AAFPRS), the most popular cosmetic surgical procedure in 2010 was rhinoplasty, with an average of 54 procedures performed per surgeon. Dr. John Hilinski, a facial plastic surgeon in San Diego who performs well over 100 procedures each year, says because of its popularity, rhinoplasty is subjected to several misconceptions regarding recovery and the surgical process. Dr. Hilinski discusses important factors for patients to consider when weighing the gravity of a surgical procedure such as rhinoplasty in San Diego.

San Diego facial plastic surgeon Dr. John Hilinski says rhinoplasty is the most common procedure he performs at his practice, with an average well over 100 procedures each year. While well above the average, this statistic is reflected in the most recent study from the American Academy of Facial Plastic and Reconstructive Surgery (AAFPRS), which states that an average of 54 procedures were performed per surgeon during 2010.

According to the AAFPRS study, rhinoplasty was the most popular cosmetic surgical procedure performed in 2010, particularly among men where it was nearly twice as popular as any other surgical procedure. Dr. Hilinski says with the popularity of San Diego rhinoplasty comes a number of misconceptions patients need to be cautious of when considering the procedure. Because rhinoplasty affects both the cosmetic appearance of a central point in one’s facial symmetry, as well as essential airway passages and breathing structures, he says patients should be sure to discuss the entire surgical process and recovery with a board-certified facial plastic surgeon before undergoing any nasal reshaping surgery.

While the typical rhinoplasty procedure takes anywhere between an hour and a half to three hours to perform under general anesthesia, Dr. Hilinski says most patients expect the recovery process to be quick. However, because of the intricate nature of rhinoplasty, he says full healing and final shape of the nose may not occur until anywhere between six months to two years after surgery, depending on whether patients undergo an open or closed procedure. Dr. Hiliniski says many patients feel publicly presentable after 10-14 days, but rhinoplasty recovery is an ongoing process and patients need to be prepared for swelling, bruising, and puffiness that may realistically require a significant amount of healing before the final desired results take shape.

“In a majority of open rhinoplasty procedures, nearly 70-80% of the swelling has gone away by 2-3 months out from surgery. That leaves nearly 20-30% of the swelling that still has to go away over the next 1-2 years. This is a point that many rhinoplasty patients often times forget. Even at 9 months out from surgery, when patients think they are looking at the final result, the reality is they still have a decent amount of healing to go before the shape of the nose finally plateaus. In patients who have had a closed rhinoplasty procedure, it may take the final shape as early as 6-9 months out from surgery since there is less swelling involved with this type of rhinoplasty technique. Over this time they should see a progressive trend where the nose is taking on its new shape and size. However, rhinoplasty patients need to keep in mind that there may be periods of time (days to weeks) when the nose looks more swollen or puffy than it did previously.”

Dr. Hilinski says patients considering rhinoplasty must take into account all factors before deciding to undergo a procedure. He stresses the level of commitment patients need to prepare for with such a cosmetic enhancement and recommends talking about the options with an experienced and personal facial plastic surgeon so as to ensure the highest quality results, safety, and patient satisfaction are achieved.

“I think one of the most important things that patients need to realize about rhinoplasty surgery is the healing process can be quite extensive when compared with other plastic surgery procedures (such as breast augmentation or eyelid surgery). Many patients are under the mistaken perception that their nose will be essentially healed 2-4 weeks out from surgery. When someone considers undergoing a rhinoplasty procedure, they are committing themselves to a long-term healing process that can take upwards of 1-2 years before the nose ultimately settles into its final shape and size. This is quite a commitment when it comes to surgical healing and one that needs to be considered very seriously by any potential rhinoplasty patient.”

Located at 3720 Fourth Avenue in San Diego, CA, Dr. Hilinski’s practice can be reached at (619) 296-3223. He can also be contacted online via the website www.drhilinski.com or www.facebook.com/drhilinski.