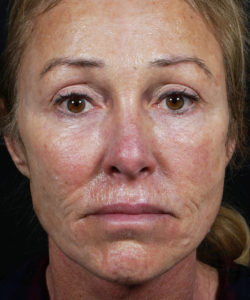 So many patients seek out Dr. Hilinski because of the natural results he is able to attain. Here is a classic example of just that – a patient who desired to look younger and more rejuvenated without looking like she had plastic surgery performed.

When Dr. Hilinski examined her, he noted the usual signs of aging he sees in many middle-aged patients living in San Diego. Much of this had to do with sun exposure and damaged skin from being outside. This typically consists over skin wrinkling and age spots. In her case, you can see signs of this, particularly around the mouth and the jowl region where the resting wrinkle formation was most pronounced.

The other issues she had were more related to regions of volume loss where the fat in her face had started to atrophy, or shrink away. This is also a very common problem in patients her age. As the aging process sets in, people begin to lose volume in their face from the fat starting to shrink down. When we lose this volume, some areas of the face start to look deflated and begin to shadow a bit more than desired. Collectively, the wrinkled skin and fat loss give the appearance of being prematurely aged.

So what are the answers to these problems? For the former issue of aged skin, laser resurfacing is still one of the best options. Dr. Hilinski mostly uses a carbon dioxide (CO2) laser to help rejuvenate skin. Like many of the lasers on the market today, ours is able to be fractionated – which simply means that the laser beam is broken up into micro fractions. This translates into only a fraction of the full laser beam hitting the skin in any one place. In doing so, this allows preservation of micro-sized islands of skin that do not get touched by the laser – which allow for more rapid healing from the procedure. This is why fractionated CO2 laser skin resurfacing treatments are so much more popular today. In essence, the laser is used to ‘wipe away’ the outer layers of skin to allow a new, fresh layer of skin to grow in that is more youthful and vibrant.

The latter issue of volume loss from fat atrophy is addressed by simply replenishing the face with more fat. This is precisely what fat transfer, or fat grafting, does in the world of plastic surgery. If one takes fat from one area of the body, for example, the abdomen, and transfers it as a graft to a different region, the body will typically allow the fat to live in the new location. In the process of grafting the fat, a certain percentage of it will not survive the transfer process. But a good percentage of the fat will survive once it gets a new blood supply in the new location. Once this occurs, the fat now has a new home and will live in the new location just as if it was always there. Nowadays, techniques for fat grafting have been thoroughly refined to the point that we have been able to effectively increase the percentage of fat that survives the transfer process. This translates into better cosmetic outcomes and results with fat transfer.

So back to this patient. This combination of skin laser and fat grafting is what was recommended to her. She underwent the combined procedure while awake using just local and topical anesthesia. The fat was harvested from the abdomen region and used to restore lost volume in various regions of the face. This included the area under her eyebrows (where she had too much hollowing), the cheeks and the lower face. Once this was done, the CO2 laser was used to resurfacing her facial skin.

The results of the procedure are shown here several months into the healing process. Overall, you can tell that she just looks more rested and rejuvenated. But the beauty is that you can’t pinpoint precisely what she had done and where it was done. That is because her results are so natural looking. Overall, you can readily tell that her skin is smoother with less wrinkle formation – especially around the mouth region. In addition, she has improved volume where her face just looks fuller with less shadowing. The patient was quite happy with the outcome of her fat grafting and laser skin resurfacing procedure and has recently referred one of her friends for the exact same treatment! 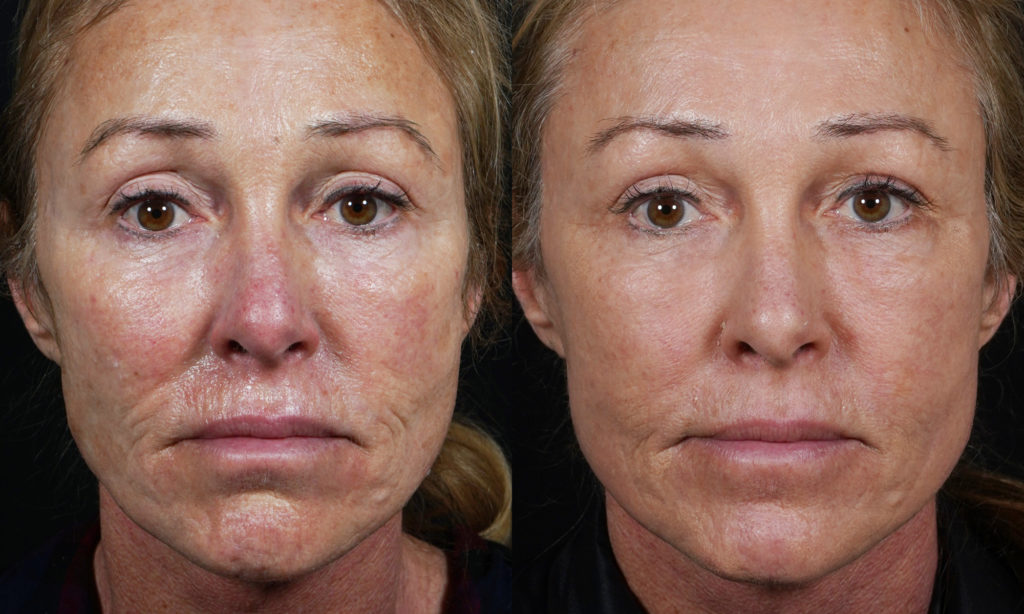