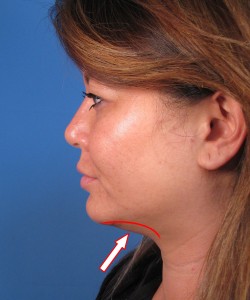 On examination, that is precisely what was found in this particular female neck liposuction patient. When feeling her neck and jawline, there was an excess of unwanted fat under the chin (called the submental region) and along the upper neck. The end result was a lack of definition along the jawline. This can be seen in the adjacent photo diagram showing her appearance prior to having neck liposuction performed. As you can appreciate, there is extra volume under chin that is contributing to a more rounded appearance of the neck as seen from the side view (white arrow). Ideally, her jawline and neckline would meet where the curved red line is drawn to allow a more defined look. In this particular patient, the skin was still quite healthy with excellent elasticity. This term refers to the rubber-band like quality that allows skin to swiftly snap back into place when pinched and pulled – much like an elastic band. Elasticity is a very important quality to have when being considered for neck liposuction since you need to rely on the skin to ‘shrink’ down once the fat has been removed. If the skin is lacking in elasticity, it will simply just hang down after the fat has been removed – leaving the neck looking arguably even worse.

In patients like this one, neck liposuction can often times be performed successfully using  local anesthesia. Meaning, you don’t have to be put to sleep completely in order to have neck liposuctioning performed. In this particular case, the neck liposuction was performed in our private surgical suite after giving her a low dose oral sedative (much like a sleeping pill). Once she was feeling relaxed, the neck area was then injected with a specialized solution containing a numbing agent to provide complete anesthesia from the chin down across the neck. This is called tumescent (pronounced “too-mess-ent”) anesthesia when a dedicated pump is used to ‘fill’ the tissues under the chin with the chosen anesthetic solution. All the while, the patient is alert and breathing on her own – just not able to feel any pain in the region where the liposuction is planned.

The actual liposuction of the neck region is performed through a very tiny incision made under the chin and just behind the earlobes. A very narrow (2-3 millimeters) liposuction cannula (or rod) is gently placed under the skin directly into the fatty tissue layer. The excess, unwanted neck fat is then liposuctioned out using a medical vacuum device. During the procedure, it is very important to try and remove the overly prominent fatty neck tissue in a symmetric manner so that both sides of the neck appear equal in contour and shape. Once the excess fat has been liposuctioned out, the short incisions are closed with fine sutures (stitches). Since the patient did not require a general anesthetic for the neck liposuction, a bandage was placed around the neck and she was allowed to go directly home within minutes of finishing the procedure.

The neck bandage was removed in 4-5 days following the neck liposuction procedure. As the healing process unfolded, her neck skin would progressively shrink-wrap up to reveal the newly defined changes. This is the part that relies heavily on the skin elasticity that was referenced earlier in the blog discussion. As time continued, her neck contour became better and better as the outline of her jaw became increasingly visible and the angle of her neck became more refined. The results of her neck liposuction are shown below. As you can see, she looks fantastic following neck liposuctioning! Overall, her face and neck appear much thinner with improved definition. If you look at her jawline, in particular, you can see how much better the shadowing is following liposuction of the neck. Whereas her jawline was previously being ‘masked’ by the excess fat, it can now be readily seen as a result of the neck liposuction. And what happened to all that skin that was covering the fatty bulge under the chin? It has now shrunk wrap as a result of the skin elasticity forcing it to take the new shape of the freshly contoured neck. When looking from the side, or profile, view of the face and neck, you can really begin to appreciate just how much change in contour has been realized following liposuction. And perhaps the best thing is that she still looks like herself – just a more defined, refined, rested version of herself. 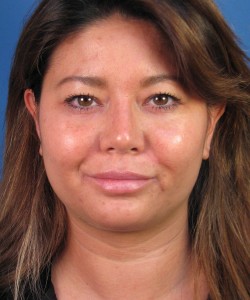 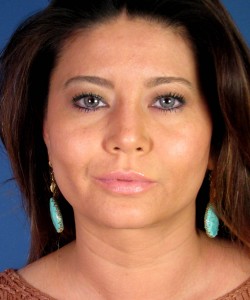 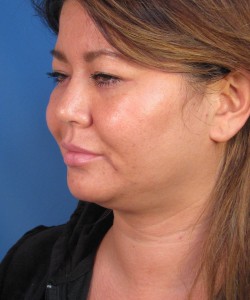 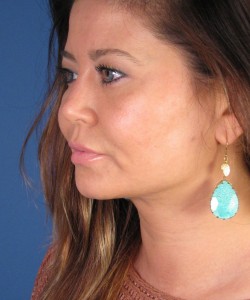 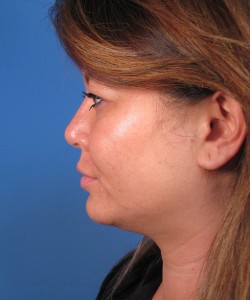 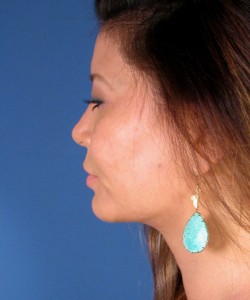 If you are interested in pursuing neck liposuction by a San Diego board certified facial plastic surgeon with dedicated experience in cosmetic neck contouring, contact our office today to meet with Dr. John Hilinski – one of San Diego’s best neck liposuction surgeons.