With as many questions as I get regarding rhinoplasty and computer imaging, I felt compelled to leave a quick post using an ethnic rhinoplasty patient of mine as an example. This particular patient consulted with us desiring reshaping of her nose for a dorsal bump, a depression in her supratip and ptosis (drooping) of her nasal tip. As can be seen from the attached photos, she is an ethnic rhinoplasty patient. Therefore, surgical planning in her particular case had to take this into consideration so that her final result would be in balance with her remaining ethnic facial features. As part of her rhinoplasty consultation, we performed computer imaging of her nose to gain a better understanding of the direction and degree of change that was desired. Her preoperative frontal and side views are shown below along with the computer imaged photos. The computer imaging helps provide the patient and surgeon with a realistic visual of what the final outcome might look like following rhinoplasty. In this patient example, I suggested we smooth out her nasal bridge, rotate her tip slightly and narrow the base of the nose in a conservative fashion. Combined, this was envisioned to provide her with a nice esthetic improvement without obvious signs of having had surgery all the while preserving her ethnic look. Based partially on these images, she decided to proceed with surgery. 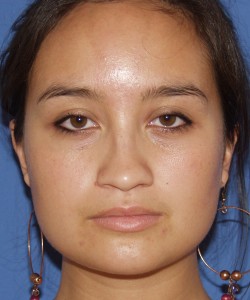 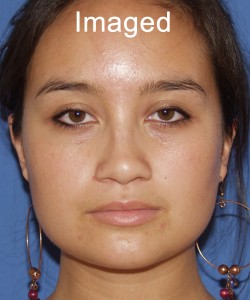 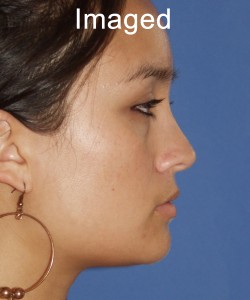 She subsequently underwent an open rhinoplasty procedure, which included several maneuvers to also help improve her nasal breathing and function. I ended up rasping down her bridge in a conservative fashion. This was done to maintain a nice bridge height that would provide her favorable shadowing on the front view. At the same time I placed a small cartilage graft just above the tip region to help address the slight depression that she had. I also rotated and elevated her nasal tip to give a more feminine angle between her upper lip and nose. Finally, we narrowed her nasal base so that her nose did not appear as wide. Below you can see her actual before and after photos. The after photos (far right) were taken at one year postoperatively to give an accurate portrayal of a stable, long-term rhinoplasty result. As you can see from her after photos, she has a global improvement in the appearance of her nose while maintaining a natural, ethnically consistent look. In fact, she looks as if she could have easily been born with this nose. In addition, you can see that her actual final rhinoplasty result is very similar to what we had imaged during her preoperative consultation. To see her other before and after photos, including oblique and base views, simply click here. 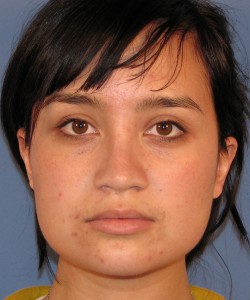 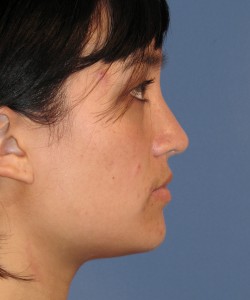