This patient was recently seen in the office for follow-up evaluation after a revision open rhinoplasty procedure that I performed. I thought he was a good case example to discuss some of the nuances of bridge and tip reshaping in a male, ethnic revision rhinoplasty patient. This patient was originally operated on in the military several years ago where he had his tip and bridge reshaped. Unfortunately, he developed postoperative loss of his tip projection. 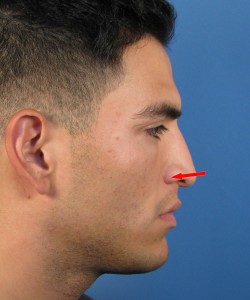 Meaning, the position of his nasal tip was compromised and began to drop back closer to his face (see adjacent photo with red arrow). As this occurred, the tip also began to droop down leaving him with what we call tip ptosis. In addition, his bridge was reshaped but left too high – giving him somewhat of a convex, or curved, shape as seen on his profile view. Combined, the tip ptosis and convex bridge made his nose look even more droopy, distracting from an, otherwise, very masculine look. He subsequently consulted with us here in San Diego for a possible revision rhinoplasty procedure. On examination, I noted the issues he had with the bridge and tip ptosis.In addition, however, I also noted that his nasal pyramid (nasal bone) was too wide (see blue & white arrow) and his tip had a somewhat pinched appearance as it transitioned away from the midline (see red angles with shadowing). We performed computer imaging of his nose to gain a better understanding of what he envisioned following surgery. Based on the computer imaging and my discussion with him, he elected to go forth with the revision rhinoplasty to further reshape his nose. 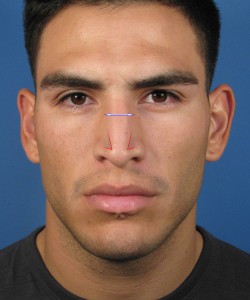 He was brought to surgery where an open rhinoplasty approach was used to gain adequate exposure of his bridge and tip. I ended up rasping down his bridge to create less of a convex contour as seen on his profile view. I also performed osteotomies on both sides – or in other words broke his nasal bones to narrow them – to address the excess width. At the same time we were able to reshape his tip by bringing it up slightly and projecting it out the appropriate amount. He had very little septal cartilage remaining inside of his nose because of the prior septorhinoplasty that he underwent. Therefore, I had to harvest cartilage from his right ear in order to obtain sufficient grafting material to rebuild the nasal tip. The ear graft was used to widen his nasal tip and provide him a less pinched appearance. All the while, I had to keep in mind that he was an ethnic rhinoplasty patient and ensure that his outcome was going to be consistent with his remaining facial features. As you can see below in his before and after photo series, I think we accomplished the goals of the surgery – to reduce his bridge while preserving a strong masculine profile, narrow the nasal bones slightly, elevate the nasal tip with improved projection, less pinched appearance and maintenance of his ethnicity. 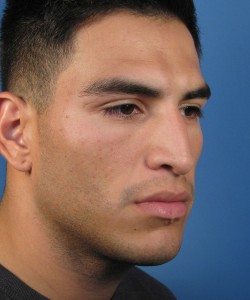 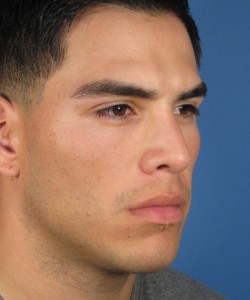 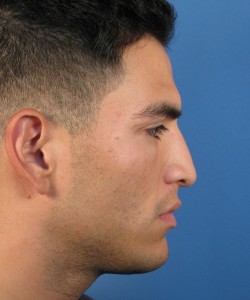 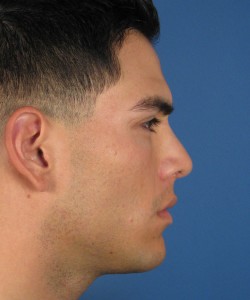